You are here: Home / Good Eats / Double the Fun or Double the Corn Anyway

Corn is a pretty popular vegetable and with good reason. It’s delicious and with summertime coming, it’s just hitting its peak season. And really, what’s better than biting into an ear of corn dripping with butter and salt. There’s nothing sweeter than the juices exploding and smacking your neighborhood upside the head.

Let’s face it, corn is sassy, saucy, and seasonal. And the best time to eat your veggies is when they are in season. It’s when they are the most affordable, the most nutritional and the most flavorful.

On Monday night, I made grilled corn with cilantro lime butter, and it was sensational. You put the corn, with the husks pulled down, right on the grill. Slather it with your seasoned butter and rotate. The end result is heavenly. And, this “butter” would be great on other grilled veggies or meats. Now this recipe hails from Ms. Martha Stewart herself, or at least one of her minions. Do you think she’s the creative genius behind it all, or just a great brand name? http://www.marthastewart.com/332750/grilled-corn-with-cilantro-butter 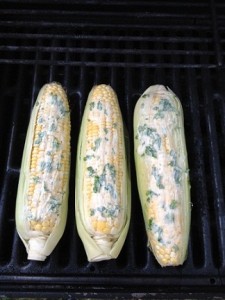 Look at all the buttery goodness.

Final Product….Now I didn’t pull the husks down and this made things difficult later on when it came time to eat them. Learn from my mistakes people. 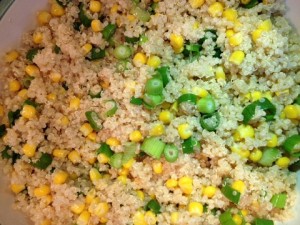 So, I mentioned double the fun and what’s better than more corn. This  second recipe couldn’t be more different, but it was just as delicious. This is a warm Quinoa Corn Salad with Green Onions and Lemon Zest.  If I had to describe what summer smells like, it would be in this bowl. It smells fresh, crisp and is really mouth-watering. Not only does it taste amazing, but it’s also really good for you. For those of you unfamiliar with quinoa, it’s commonly referred to as a grain and most similar to rice (you cook it the same way you would rice too), but it’s actually related to the leafy green vegetables like spinach and swiss chard. Go figure, even I learned something new today. Here’s why quinoa rocks and needs to be a staple in your diet, if it isn’t already:

In order to make this salad, you cook your quinoa and corn according to the package directions. I used frozen corn, but only because I had already grilled up my fresh corn earlier in the week (and smothered it with Cilantro Lime Butter). 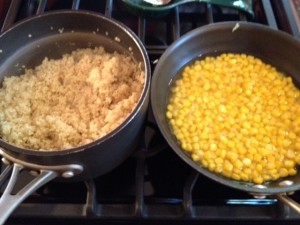 You chop up your green onions (from my CSA 🙂 )and you make your dressing to pour over the whole thing which really brings all the flavors home. The dressing is a combination of melted unsalted butter (I actually used half butter and half olive oil), lemon juice, lemon zest, honey, salt and pepper. Next time, I’ll completely replace the butter with olive oil. It’s unsalted butter anyways, so you won’t miss it at all. Trust me, I know these things, especially when it comes to butter. If I thought you’d lose any of the flavor, I wouldn’t recommend it.

I love these colors.

Once the corn and quinoa are done cooking, you put them in a bowl, add your green onions and pour the dressing over the entire thing, stirring to combine. And that’s it. It’s simple, fresh and fabulous. And this particular recipe serves 8, so I know what I’ll be having for lunch tomorrow.

Have a great weekend everybody. And remember to tell your daddies, Happy Father’s Day.

Quinoa with Corn and Scallions

Place the corn in a large pot and fill it with enough water to cover the corn. Cover the pot and bring it to a boil. As soon as the water comes to a boil, turn off the heat and let the pot stand, covered, for 5 minutes.

Remove the corn from the pot and let it cool on a cutting board until it’s easy to handle. Then, using a sharp knife, cut the kernels off the cob.

Or if using frozen corn, cook according to package directions.

Prepare the dressing by whisking together the lemon zest, lemon juice, melted butter, honey, salt and pepper in a large bowl.

Cook the quinoa in a pot of boiling salted water per the package directions.

Add the quinoa, corn kernels and chopped scallions to the bowl with the dressing and toss until it’s evenly coated. Season with salt and pepper and serve.

« What Do Core Moves and Swiss Chard Have in Common?
Sometimes Shit Just Happens »