You are here: Home / Good Eats / WIAW: Four Weeks In

Welcome back for another exciting, hair-raising, jaw clenching, fist gripping edition of What I Ate Wednesday sponsored by Jenn over at Peas and Crayons.

Since I like to submit each day’s post before heading to my real job (ya know the one that pays for my food addiction and gym membership), you’ll likely never get Wednesday’s eats in this post. Not that I wouldn’t necessarily share them at a later date, especially when they are something delicious. For this WIAW though, I’m going to dispense with my Tuesday eats, which I happen to think really rocked. Without further ado…. 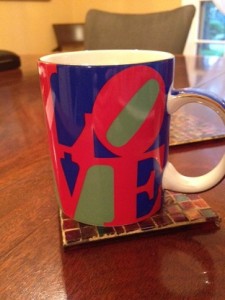 This should surprise no one. Breakfast was a cup of love…er, coffee, followed by a strawberry banana smoothie slurped down on the way into work. This past weekend, the nanners didn’t look so hot at the grocery store, so I skipped buying any.

Lucky for me, I’ve been freezing and stock piling bananas whenever I thought they were too far gone to eat as is, so I’ve been using the frozen bananas in my smoothies and skipping the ice. It’s like I knew this week would eventually come; it must be my psychic powers. I can also cook massive amounts of veggies in a single serving…Be afraid, be very afraid.

I followed my drinkable breakfast with some actual solid foods; a handful of Energy Bites and some kick ass cherries. Seriously, summer time is the best time to eat fruit. Everything is so ripe and flavorful; I cannot get enough. 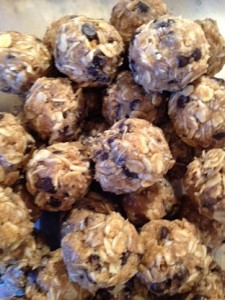 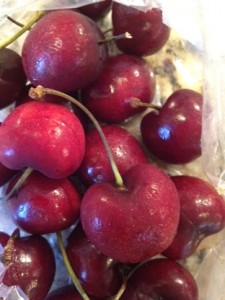 This past weekend, I got asked if I was stuck on a deserted island, and I could only bring one type of food, what would it be. Let me start by saying philosophical questions like these make me a little bonkers. Come on people, the odds of this happening are like zero percent, so what the heck difference does it make. Me, I prefer to deal with a little thing I call reality (and psychic powers, because the two go hand in hand). Being the socially acceptable person I was raised to be, I didn’t mock the question-asker nor did I point out the absurdity of the question. Instead, I told this person (I prefer not to divulge gender, although if it was a guy, I’d totally tell you), I would bring fruit. Fruit is refreshing and satisfying on a hot sultry day, so it seems like a great island food to me. Sadly, this person was not as gracious as I, and they looked at me like I had three heads, when I obviously don’t.

This same person said they would bring Panera’s Macaroni and Cheese. Yes really, that’s exactly what you’d want on a steamy sweaty island because nothing says rejuvenation quite like some rich heavy dairy products.

I actually love macaroni and cheese, but I prefer to eat it in the winter sitting by the fire or at a cookout out with some barbecue chicken and baked beans, not on a deserted island. And certainly not Panera’s. I didn’t go all health nut on their ass, although it crossed my mind for a fraction of a second. I just raised my eyebrows and said, “Interesting choice.” Ha, ha; I really showed them. 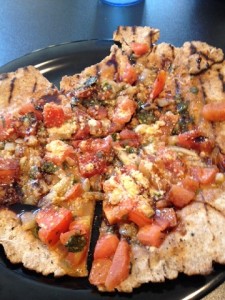 Back to my Tuesday eating frenzy, the Hubby and I went out to lunch together (after my spinning class, of course). We hit up a newish cafe in downtown Cleveland: Nexus Cafe and Coffeehouse which uses local, organic and sustainable produce and makes pretty much everything on sight, including their own mayo. In anticipation of a veggie loaded and salad loving dinner, I went for “Grandma’s Pizza,” with diced tomato, onion, garlic, basil, olive oil, and parmesan cheese. It had a super thin whole wheat crust and was phenomenal. Anytime I can eat pizza without feeling guilty and gross afterward is a winner in my book. I’ll definitely be going back.

Before I get to the main course, I’m going to talk workouts because July’s WIAW theme is all about fitness. Yeah!

You already know how much I love getting my exercise on, but in light of the fact, I’m going to be in a bikini in less than a week, I am really all about fitness this week. I did a spinning class on Monday and Tuesday and will be doing another one on Thursday. I also plan to go to the gym every day from now until bathing suit time, and I’m rocking the Core Moves and Tank Top Arms workout every night. For kicks, I’ll sprinkle in some thigh exercises too (get it…thighs, kicks…oh brother). Yes, I know it’s an extreme plan, but so is exposing myself in a bathing suit, and I aim to be ready. Since I’m on a crazy workout bender (what better kind!), I know I need the proper fuel to make it all happen. Starving myself would be foolish and make me quite bitchy, since I don’t do hungry well.

Bearing in mind food is fuel, dinner was a heavily veggie loaded dish and one I was really looking forward to making. The Hubby, despite being terrified by the sheer amount of produce involved, lended a hand. I snagged the recipe from Pinterest via http://budgetbytes.blogspot.com/2011/08/summer-vegetable-tian-660-recipe-110.html, made a few minor modifications, and pretty much rocked it, if I do say so myself. Ladies and gentleman, meet the Vegetable-Tian. 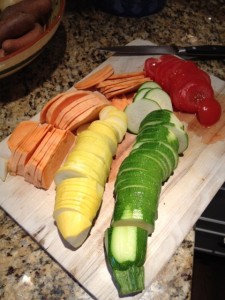 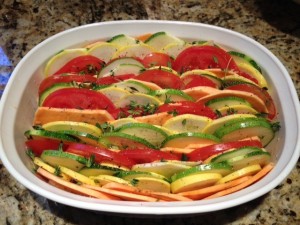 This should totally be in a magazine or an art museum or my belly. 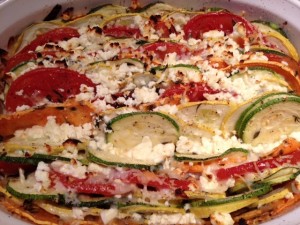 The Vegetable Tian cooked with cheese. I can barely stand it.

It was scrumptous and so unbelievably filling (all the water in those veggies). Even the Hubby, who is not a huge fan of squash or zucchini, gave it his seal of his approval. Just in case he wasn’t down with my Tian, and since we are rolling in the lettuce, dinner was also served with an equally delicious spinach salad with smoked cheddar cheese, sprouts, green onions, and a hard-boiled egg with a warm balsamic dressing. Can you say Girl knows how to work her CSA?! I wish every night looked and tasted this good. It gets snaps, shouts, sprinkles and a swizzle (for rizzle) from me. Bring on the bathing suit!

So if you were stuck on a deserted island and could bring one food, what would it be? And do you find these types of questions equally annoying?

« Living Life: CSA Style
What Was I Thinking »