You are here: Home / Good Eats / The CSA Madness Continues

We’re more than halfway through our CSA now, and similar to last week, we are up to our ears and eyeballs in fresh produce, which isn’t a bad way to be, unless of course they threaten to overtake you. The Hubby has banned me from buying any more veggies at the grocery store, and the only reason I’m listening (because no one tells me what to do) is because he’s right (look at that; it’s even in print).

Despite his edict though, I’m past my freak out moment from a week ago (backslides can happen, and I reserve that right), and mentally I’m handling it a bit better. I’ve got my game face on, we’re on high alert and no veggie is safe in my house.

That’s right because I’m gonna Cook. That. Shit. Up.

Meghan versus the Produce: I’m taking bets now, and let me just say, you want to bet on me; always root for the underdog. 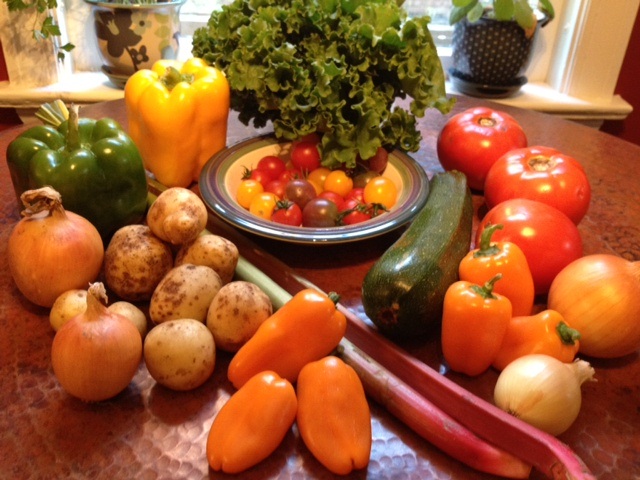 You know I love my veggies and normally I wouldn’t cuss (snort) at them, but I need to show them who’s boss. You understand. 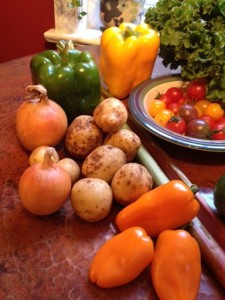 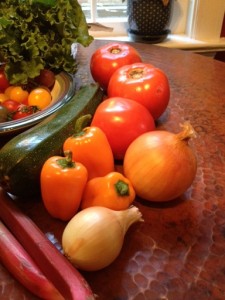 So you realize what I’m up against, our week twelve CSA share included rhubarb (coffee cake anyone?), lettuce, a green and a yellow bell pepper, some bunching onions, small white potatoes, a zucchini (it does exist! Our first in weeks), cherry tomatoes, and a handful of yummy orange peppers. I kid you not, “yummy orange peppers” is their actual name. How many creative folks did it take to make that one up? Might as well name your offspring, Kid. “C’mon Kid, eat your yummy orange peppers. Look you’re not leaving the table until those yummy orange peppers are gone. So what’s it gonna be Kid?” 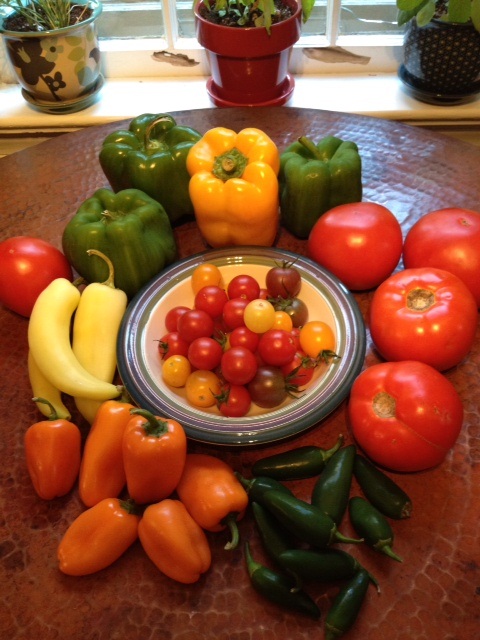 This is the tomatoes and peppers we had on hand last Thursday.

It’s safe to say we took home a pretty good haul, especially when you factor in all the goodness we got from the week before. Being part of a CSA, some might say I get a little veggie crazy or maybe a lot veggie crazy, but I also end up eating super healthy mouth-watering food. If I have to take one for the team, then I’m happy to do it because I’m a martyr like that. Alright I’m not a martyr at all, but I do love me some veggies. And just to prove it, let’s take a quick peak at how I’ve been eating them all. 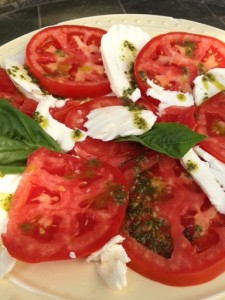 I turned my lovely beefsteak tomatoes into this fine salsa (fiesta time) and threw together a Caprese Salad with a pesto vinaigrette (great addition Mary). 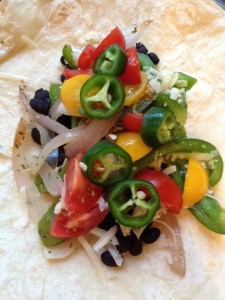 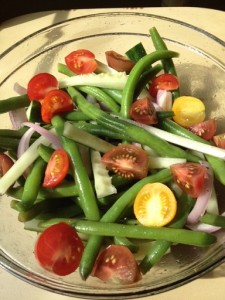 I also used my little baby heirloom tomatoes in our bean burritos and a cold green bean salad (the green beans were from last week’s share so double points there). By the way, the raw jalepeno on my burrito sent me running, and I do mean full speed ahead running, into the kitchen for a glass of water. Apparently, I’m not as tough as I thought or raw jalepenos with seeds, veins, and oil still intact can be a real son of a bitch. Holy hell, it was hot. I wasn’t sure I was going to make it; it was touch and go for a minute there. 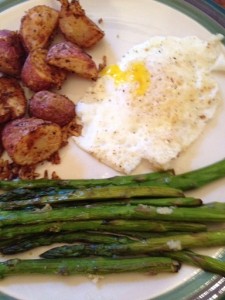 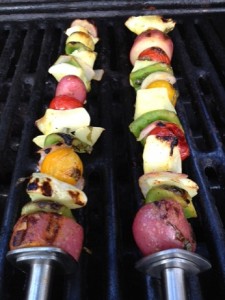 I roasted our red skinned potatoes, sprinkled them with a little Parmesan cheese and served them with asparagus, which wasn’t from the CSA, but I couldn’t resist since asparagus is pretty much one of my favorite veggies. Four calories a stalk + smothered in garlic = my BFF. I also put together some pretty little Veggie Kabobs with more potatoes, heirloom tomatoes, bell peppers, patty pan squash and onions (yeah, that would be five CSA items in one meal – Who’s house!). 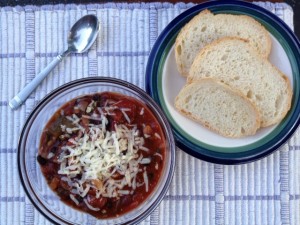 Another major CSA win was the Three Bean Vegetarian Chili, and since I’m so smart (or maybe I finally got a clue), I froze several serving size Tupperware’s for some random night when I need a break. In the past, when the Hubby and I made chili, we’d end up eating it every night for dinner and some days for lunch until it was gone. By the end of it we were so sick of chili, so our new method is much more effective. I’m almost (not quite though) embarrassed it took us so long to figure it out. We do the same thing with soup now too. It’s freakin genius. Who knew people used their freezers; about time we hopped on the band wagon and rode the gravy train.

So there you have it; a week or so in the life of an active CSA household with one Hubby, two cats, and a mad women with a competitive streak, who refuses to pitch produce. Won’t you be my neighbor….

What’s your favorite vegetable and why? Do you cook like a crazy person in order to use up food before it spoils, or do you just pitch it?