You are here: Home / Reflections / How I Became a Crazy Cat Lady

If you own one cat, you can safely call yourself a pet owner. If you have two felines running around, then you’re a cat person for sure. But, if you jump into the realm of housing three little fuzzballs, then you might be a crazy cat lady.

I’ve aways been a sucker for animals. They are sweet and cuddly, and they don’t talk back (the best part). I adore dogs, but don’t want to commit to the level of care they require. Plus, they are fairly attention needy, and that’s not really my thing. Cats, on the other hand, are a good fit for me. Since I’m an introvert, these are my kind of people: independent, loving and silent. They know how to just chill, which is why I love them, especially my two adorable kitties.

Meet Max (short for Maximus). He is the king of our house or the “Cat Daddy,” if you will.

Max is twelve, and he’s considered “geriatric” in cat years. He is definitely starting to slow down, although he still believes he can do pretty much whatever he wants. Case in point: he is not allowed on the table, yet lo and behold, there he lies. He’s a sun worshipper. 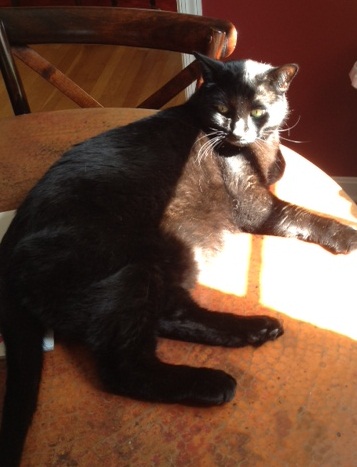 Max also has a fetish for dirty laundry, in particular socks. Everyday he brings the Hubby and I at least one sock from the upstairs laundry basket. He makes a big production out of it and meows the entire way down the stairs with sock in mouth. On good days, we’ll come home to find three socks at the base of the staircase.

Max is also a complete maniac when it comes to food. He was living on the streets, Skid Row to be exact, before we found him and took him in, and even after all these years, he’s thinks he is going to starve to death. I’m not exaggerating either; he’s got real food issues. I can’t leave food on the counter, regardless of what it is, without Max going for it. He’s eaten bell peppers, kale chips, apricot cookies, cheddar jalapeno biscuits and pretty much anything he can find. His obsession has only gotten worse with age, and it’s become so bad, I had to take him to the vet. They did blood work, and the official diagnosis is it’s all in his head, and he’s just crazy.

Meet Samantha, our furry female, who still meows in her little kitten voice even though she’s five years old now. Another stray, she is mistrustful of all men (can you blame her), but tolerates the Hubby, who actually picked her out.

In this picture, taken just this past weekend, she is particular pleased with herself. You see, she had just brought a live chipmunk into the house. Ahhh, good times… While Samantha can be incredible sweet (she spends most indoor hours in a ball on my lap), she is also a serial killer. 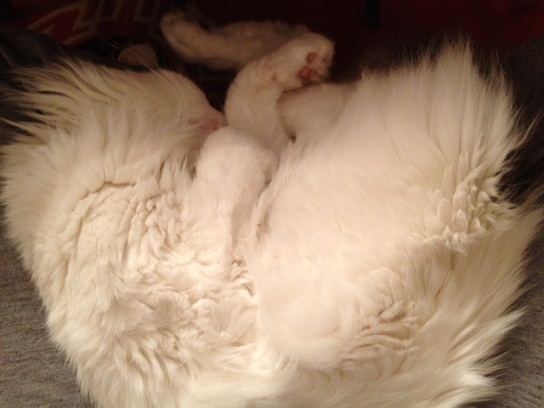 Sam has a penchant for the wildlife in our backyard. She doesn’t discriminate between the birds, the chipmunks, the squirrels or even the raccoons. I did try to warn her about the raccoons but she was undaunted and actually succeeding in scaring them away, which is probably a good thing.

It’s not enough for Sam just to catch the wildlife though; she has taken to decapitating them. Often we find headless chipmunks on the doorstep, and sometimes they have been disemboweled and actual organs are visible. It’s like a science class around here. I should be grateful Saturday’s prey was still alive when she brought it to me. As a fyi, we did free the chipmunk, and he lives to see another day.

Max and Sam have been the center of my world (along with the Hubby, of course) for years now and have truthfully been all I needed. Until this past weekend when somebody abandoned a bunch of kittens in the park. Douche bag! Sorry but it must be said, and this particular douche bag left them at the entrance to the park, which is also adjacent to the parking lot. People are sick. My buddy, who is pretty much a saint, scooped up all the little kittens and took them back to his place where he spent the better part of the weekend finding homes for the little guys. 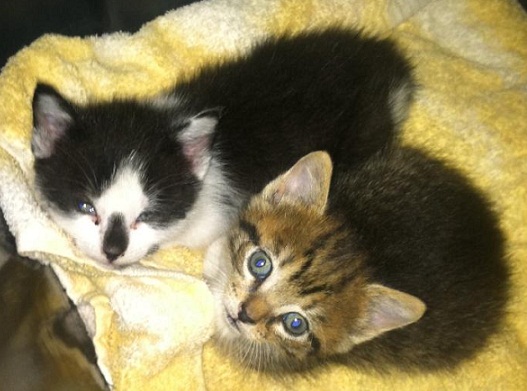 These kittens are barely old enough to open their eyes, and they kind of stumble as opposed to walk. They are teeny tiny small, super cute and practically irresistable. 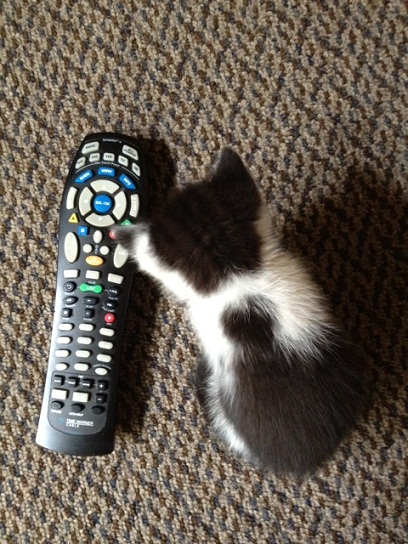 All of the kittens, except the small black and white one, have been placed with a good home. Now, I went back and forth all weekend and determined as much as I wanted to save him and considering the sheer impracticalities of having yet another cat, I just couldn’t do it. With my heart broken, I asked my buddy to find another home for the little bugger, even though I already had a name: Oscar (the actual sex is still unknown).

And he did find a home for little Oscar… with a stripper named Jo-Jo.

I have nothing against strippers, but the name Jo-Jo leaves some distaste in my mouth. While I don’t even know her, I was feeling hostile towards her. What kind of home could Jo-Jo truly provide for little Oscar? Imagine the foot traffic at Jo-Jo’s place..all sorts of sundry types with checkered pasts in and out all day long. Before you know it, little Oscar would be hooked on the nip and shedding his fur for money. He’d wind up in kitty rehab only to be tossed back out on the street when he couldn’t stay clean. So you see, I simply had to intervene. 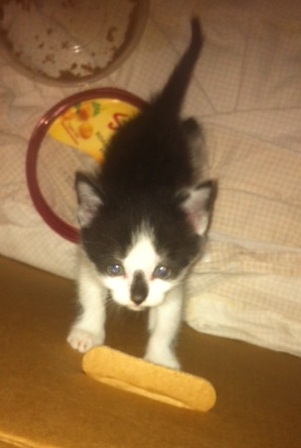 Have I lost my mind…again? What would you do? Could you resist this sweet litle face?