You are here: Home / Bottoms Up / CSA: The Final Countdown

We picked up the final bunch of produce from our summer CSA last Thursday, and after twenty wonderful, magical, competitive (I won) and sometimes borderline crazy weeks, it’s come to an end. I’d get all nostalgic and maybe even shed some tears, but I signed up for the winter program which means I’ve got another two months of goodie boxes coming, so put away your Kleenex and have no fear. Just know, every CSA post thus far has been a mere step along the way to the final countdown.

I bid a fond farewell to my summer CSA.

Before we get to the food, let’s give a great big thank you to our lovely hosts. Once you’re done here, be sure to head over to their sites and give them a little comment love because everybody likes comments (me too…aren’t I good at subtle?).

Heather at In Her Chucks

I know you didn’t look at the above picture, so go back and check again. It says, “I was featured on Fresh Foods Wednesday.” Yep, that’s right. I’ve been “featured,” which includes a shout out on Kristy’s blog, her Pinterest board, and her Facebook page. Hot damn, I just went viral. She thinks I’m funny.

She doesn’t know me yet and hasn’t realized I’m a unicorn-loving barrel of laughs mixed with more than an iota of sarcasm, or maybe she’s a wise ass too. We tend to gravitate towards one another. In any event, it made my day (for real).

Enough already; let’s get to the good stuff: the food.

Mmmm food…wipes drool from mouth. Alright, I didn’t drool. That only happens when I take naps in the middle of the day…on the Hubby’s pillow (oops). 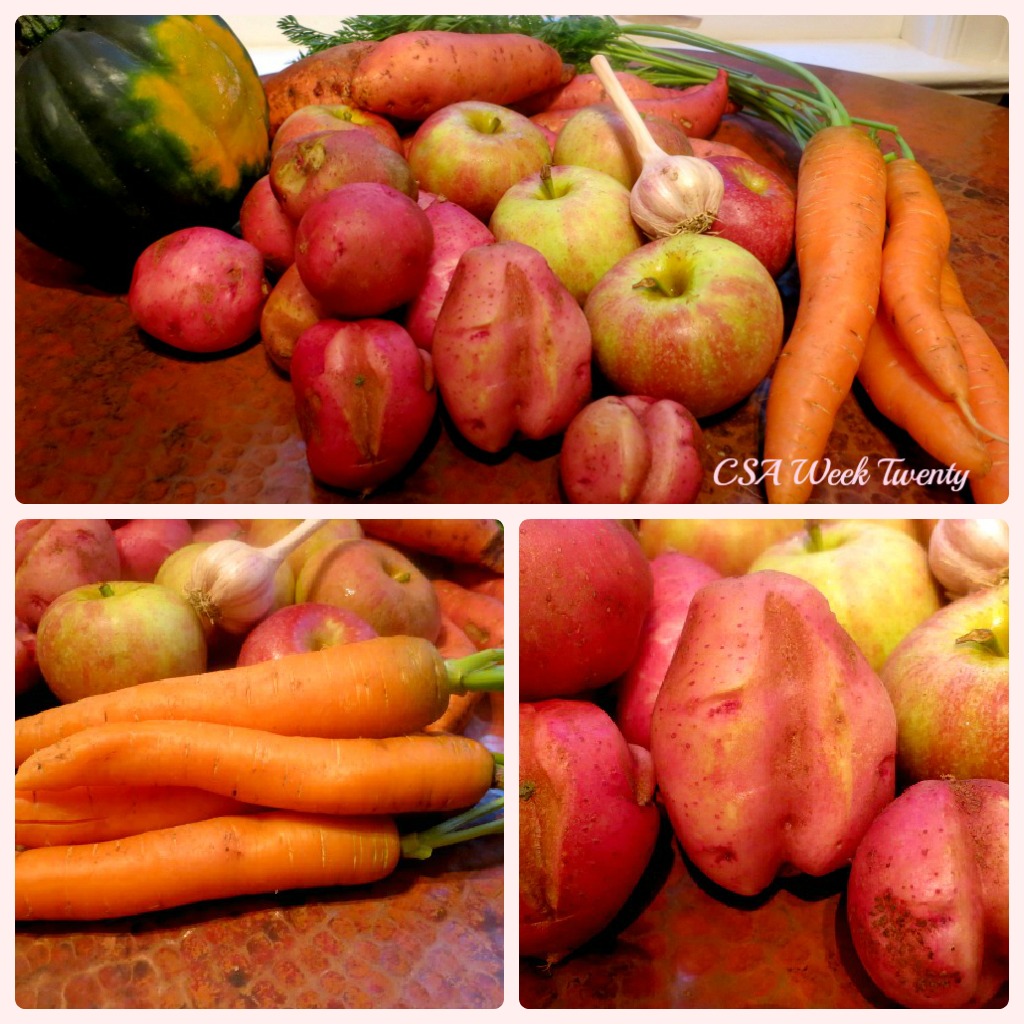 Week twenty was another great haul and the final one of the season (tear, tear). We snagged more lovely sweet potatoes, some red skin potatoes, carrots, apples, garlic, and an acorn squash. Does anyone else think the red potatoes seem a tad inappropriate; little buggers were mooning me, mocking me, or both. Whatever the case, they were out of line, so I showed them who’s boss…which is me. Obviously.

I sliced them, diced them, and tossed them with cheese and served up some Parmesan Roasted Potatoes for breakfast Saturday morning. My red beauties delivered, ass cheeks and all. 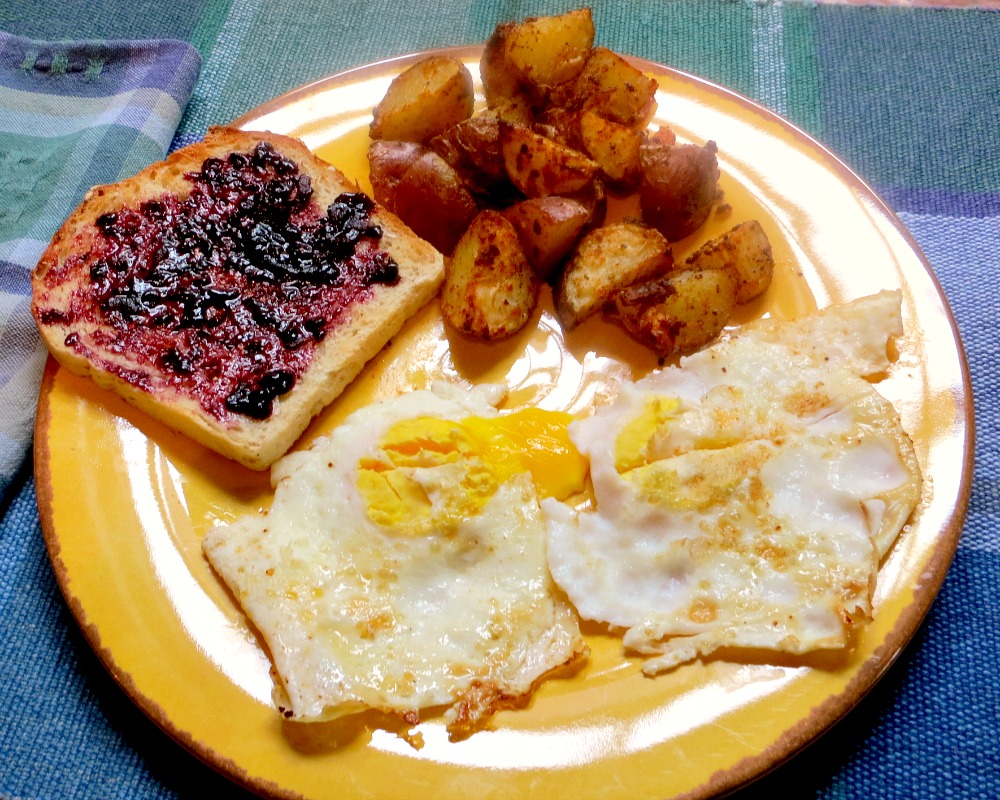 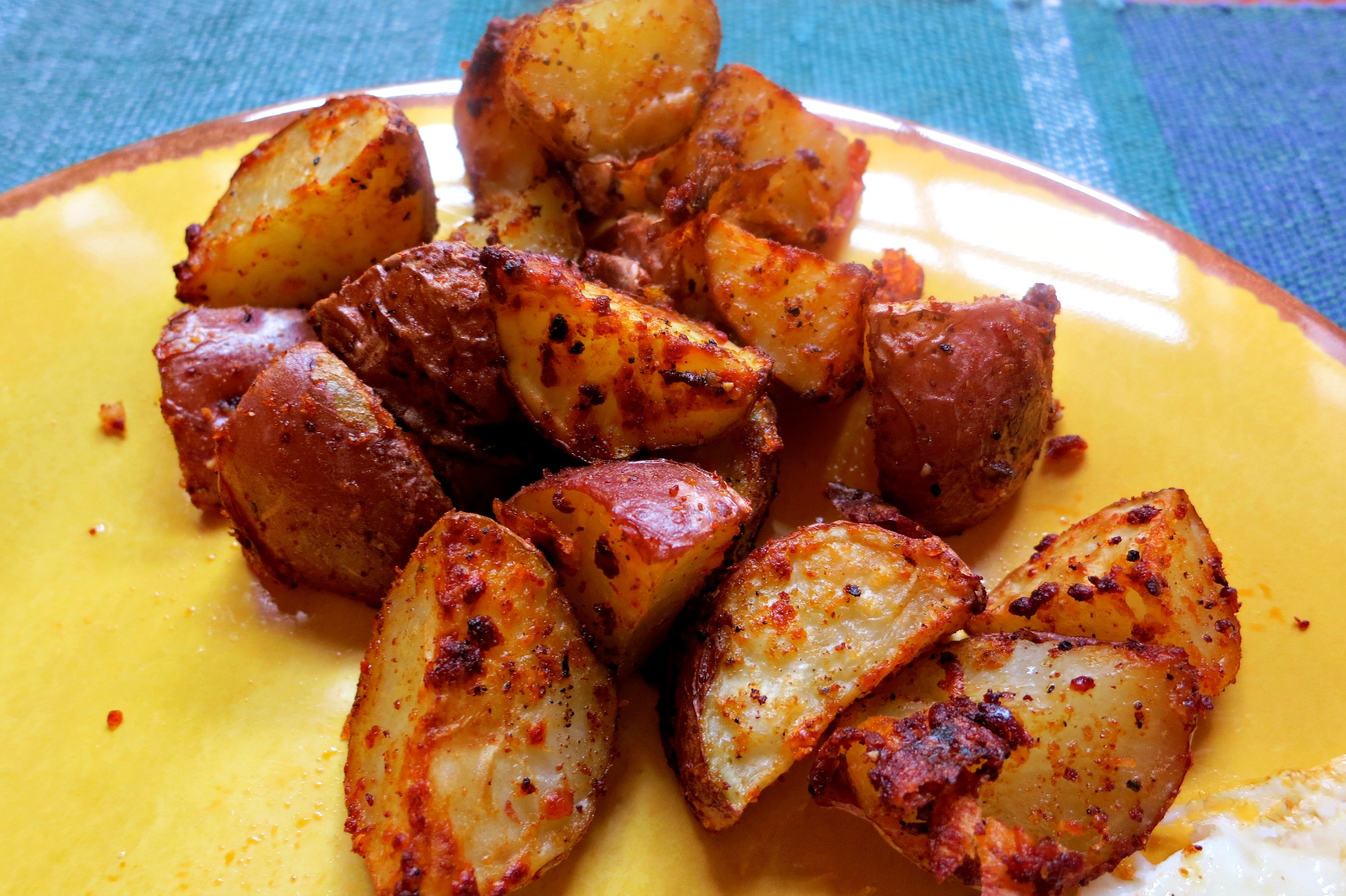 I haven’t had a chance to dig into the carrots yet, but I know they’re going to be good. I’m even toying with the idea of juicing again (in a non-steroid, legal way). I just need to pick up some beets. Yes, I know. I hated beets back in May; it’s amazing how much I’ve changed in the past five months. CSA’s do some weird shit to you. 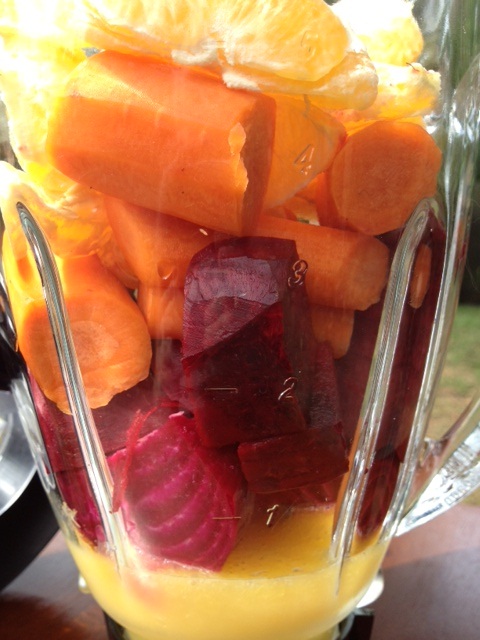 Now I’m going to be totally honest. I’ve been working mainly with apples and sweet potatoes for the past several weeks, so it’s getting harder to be impressive. You’ve already seen pretty much everything, and it’s starting to seem a little one note, at least from my perspective. I did, however, make a pretty lovely Apple Sweet Potato Tian. Even though these were featured in my WIAW eats, I’m going to share the pictures. Yes, again. I’m relentless, like a dog with a bone, or Linda Hamilton in Terminator 2. I also think Photoshop is fun, especially when other people do it for you. 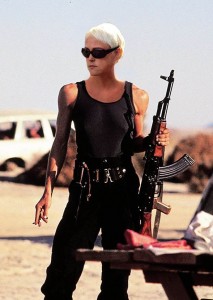 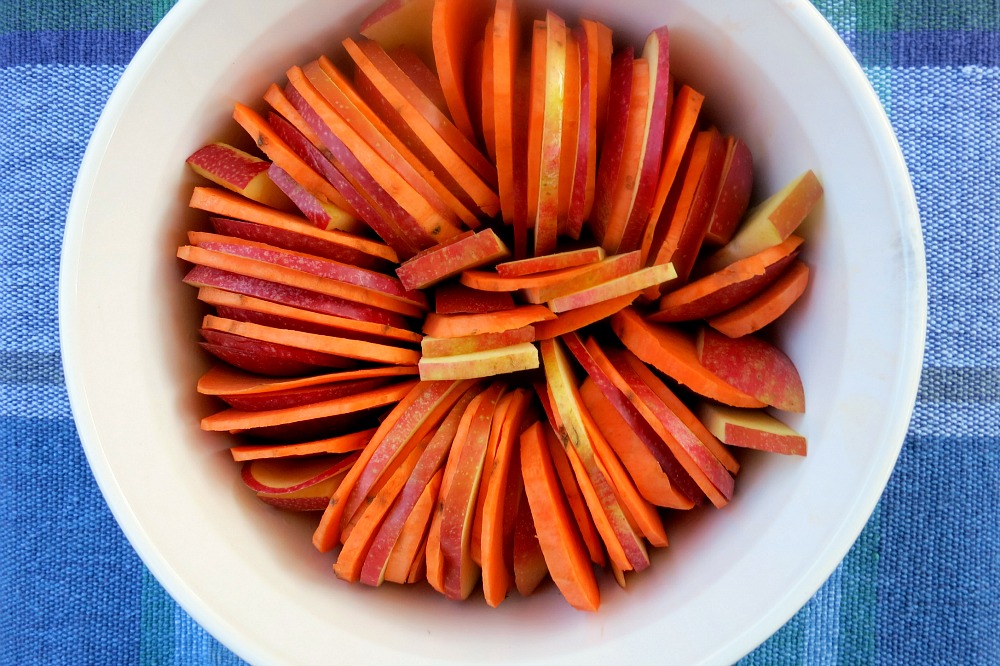 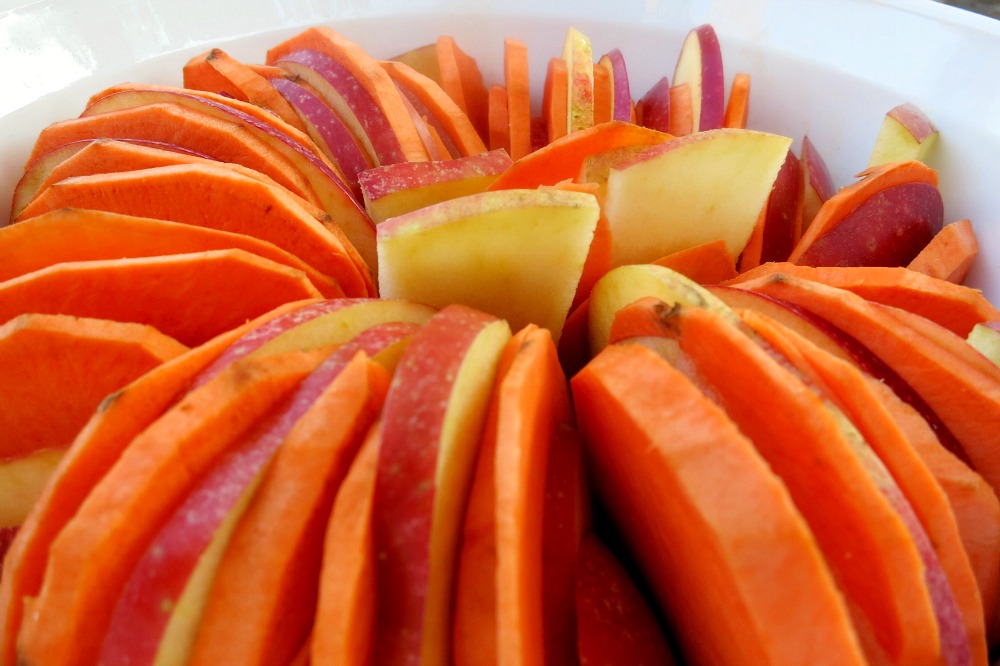 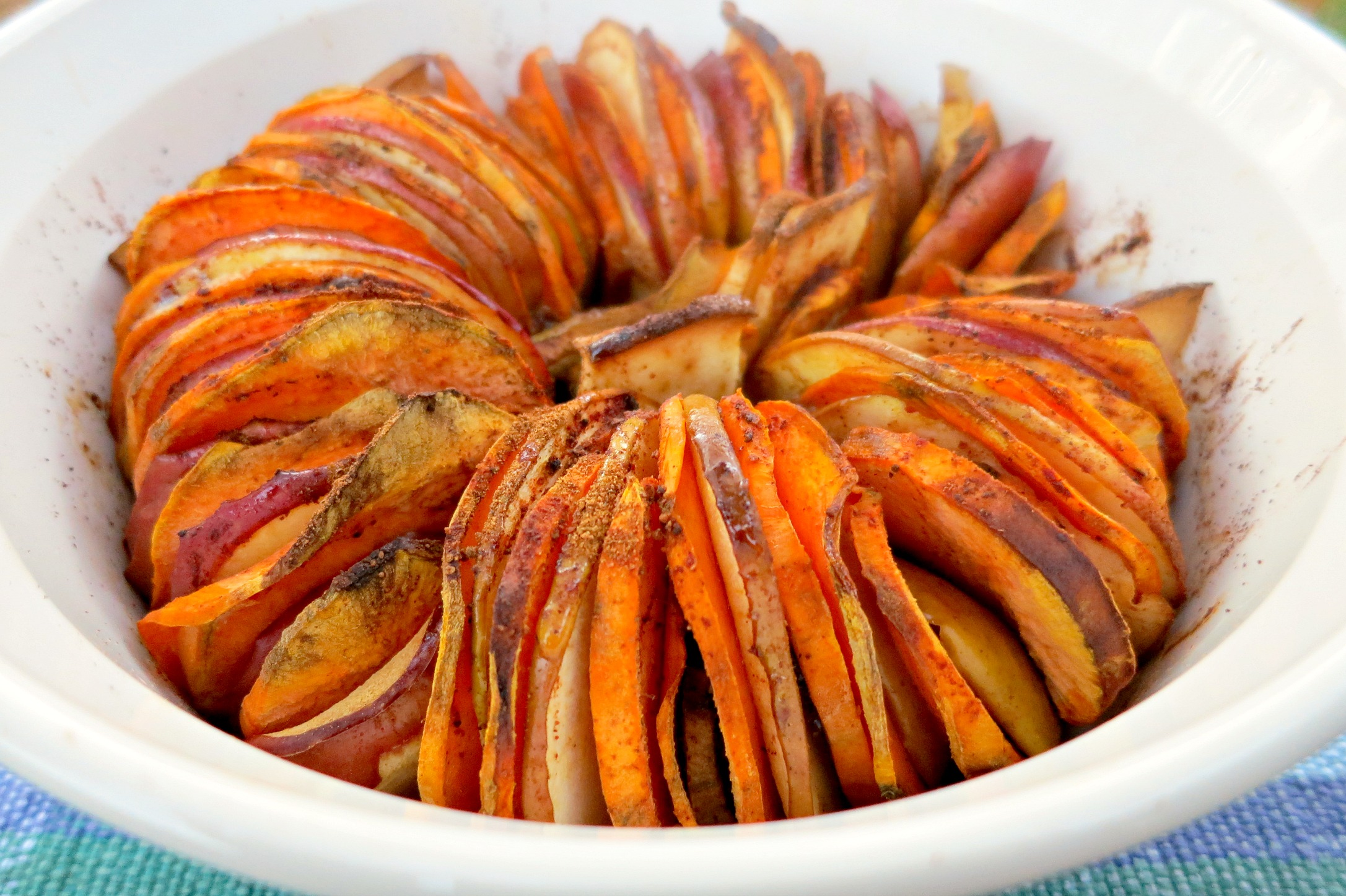 All in all, I’ve been doing a pretty impressive job (um hello, I already declared myself the winner) of using up our produce, and it’s become increasingly easier since our shares have shrunk. The one exception, because there’s always an exception, is the squashes. I haven’t actually touched them yet, other than to wash them and stage them in pictures because that’s normal. It’s also quite rational to photograph your food outside because the lighting is better. I’m dreading the day the neighbors finally get up the courage to ask what I’m doing. Aside from all that, I haven’t touched the squashes, so I’m not sure if I’m working on a Thanksgiving centerpiece or planning to eat them. What I do know is I’m hoarding squash like it’s going out of style. Say hello to my little friend(s). 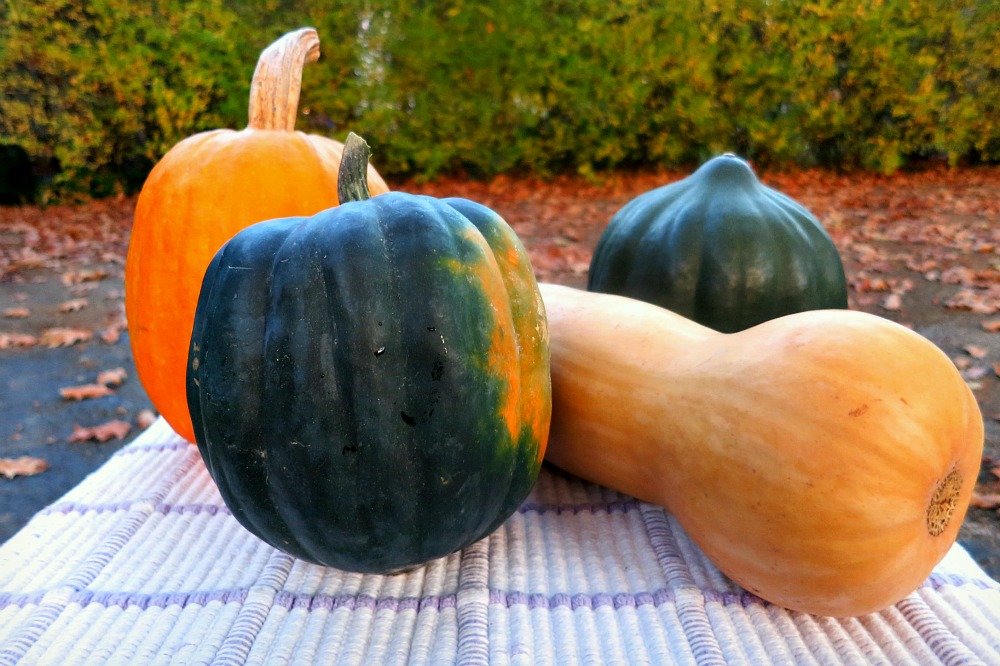 Imagine if I hadn’t given away the spaghetti squash from a few weeks ago. I’d be living in a squash jungle and having nightmares where they join forces to crush me. Disloyal squashes; those suckers will turn on a dime. I’ll have to come up with a plan to take them out before they stage a coup.

Is there anything from your CSA you’re stock piling? Don’t worry, it’s safe here. You can admit it, there’s no shame. Is there any food you’ve changed your mind about in the past year?   Is sarcasm one of your super powers?