You are here: Home / Good Eats / Taming the Beast

Before we get to today’s post, let’s give a shout out to Kristy at Gastronomical Sovereigntyfor hosting her weekly link up parties. Be sure to head over to her place and see what goodies people are cooking up with their local produce.

Now on with the show.

Very shortly (days even) after I mocked all things pumpkin, I received my first ever pumpkin in my CSA share. 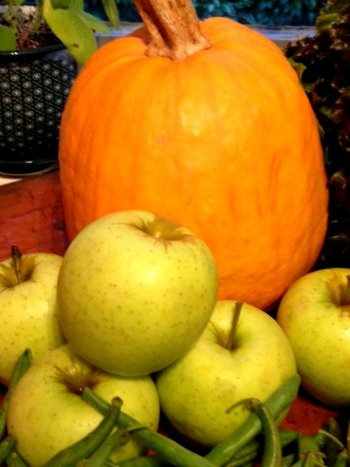 Yep, karma’s a bitch, and I was pretty much at a loss on how to handle my pumpkin. I knew I wanted to cook it and eat it, but that’s about it.

Complete honesty now, I was a little intimidated by the pumpkin since the real deal is most definitely not the same thing as picking up a can in the grocery store, which I’ve never done before either…and everyone in the blog world gasps and cries in outrage, “No pumpkin. What is wrong with her?”

Then there are some of you where cooking a pumpkin from scratch is no big deal. I’m sure you can do it with your eyes closed and one hand tied behind your back, but for me, this is like climbing Mount Everest, like swimming the English Channel or like taming the beast.

Well you can consider my mountain climbed (♫“ain’t no mountain high enough”♫), the channel swum ( ♪”ain’t no river wide enough” ♪) and my beast tamed because I took my pumpkin down this weekend, and it felt good. From here on out, you can call me Betty Fucking Crocker. No scratch that, I don’t want to be associated with a bunch of processed crap. Sorry Betty. 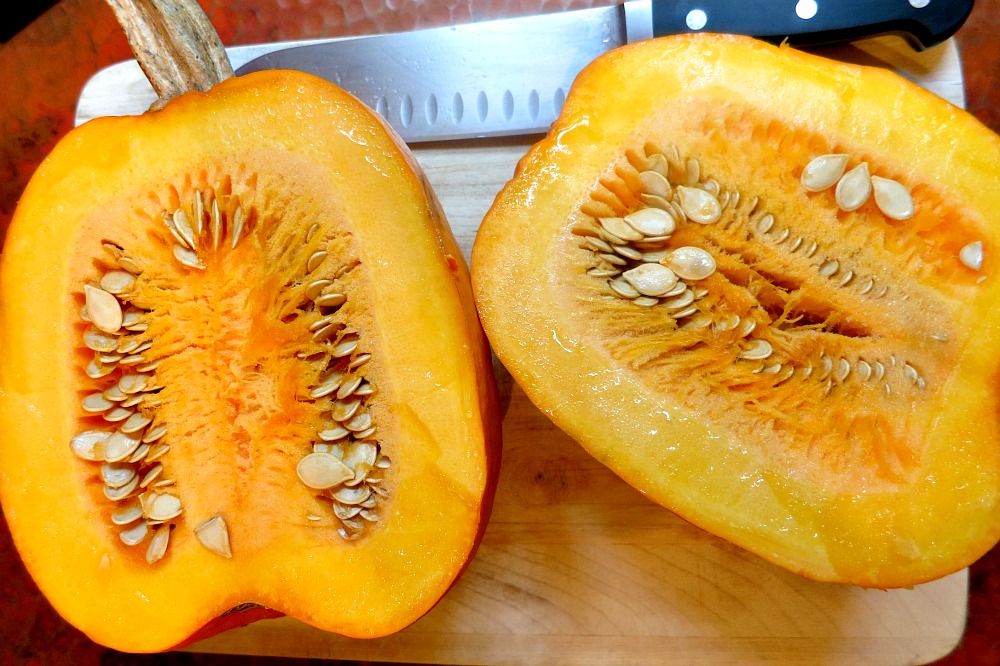 With my butcher’s knife in hand, I cut that bastard in two, and then I scooped out his fleshy innards and fed them to my garbage disposal (oh, to have a real compost monster). I also tossed the seeds into a colander because I’ve heard they’re the best part. Plus, I like to think of myself as an ethical hunter using every morsel of my kill. Well, except the innards and ultimately the skin, but whatever; just go with it. 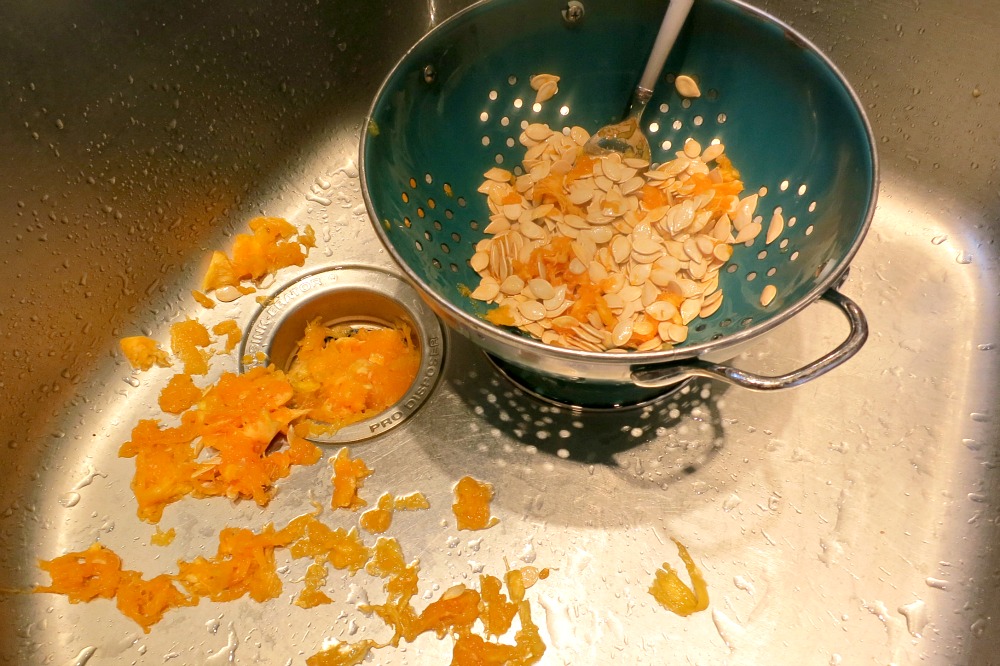 Holy crap, my sink is deep; this colander is pretty big, and judging by this picture, you’d never know it. Fact: my sink is deep enough to hide stacks of dirty dishes. Another fact: this would never happen because they’re an assault to my sense of order. The mere thought of dirty dishes piled up high makes me all twitchy, and not in a good way.

I digress (no shock there), I was really surprised by how easy and painless (for me, not the pumpkin) it was to pull out the guts. I must have a secret talent for scooping pumpkin innards, or my CSA pumpkin was a cooking squash specifically designed to have more flesh and less stringy stuff, or perhaps I scored the pumpkin flesh with a sharp knife before tearing out the entrails. I’m going with I’m magically skilled because hell, I like having hidden talents. Now if only I could unearth the rest. 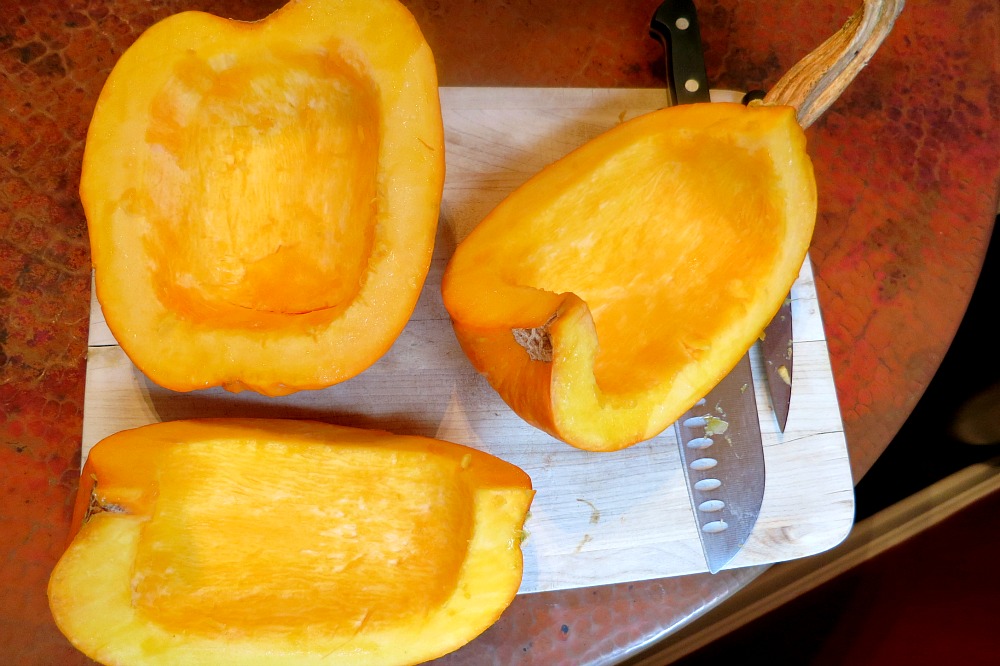 After hollowing these suckers out, I tossed them face down in a large casserole dish with a half-inch of water and stuck them in a 400 degree oven for only thirty minutes. The short cook time accounts for the fact I was working with a smallish pumpkin, which I also cut into quarters, and my oven is bad ass. Convection rocks! 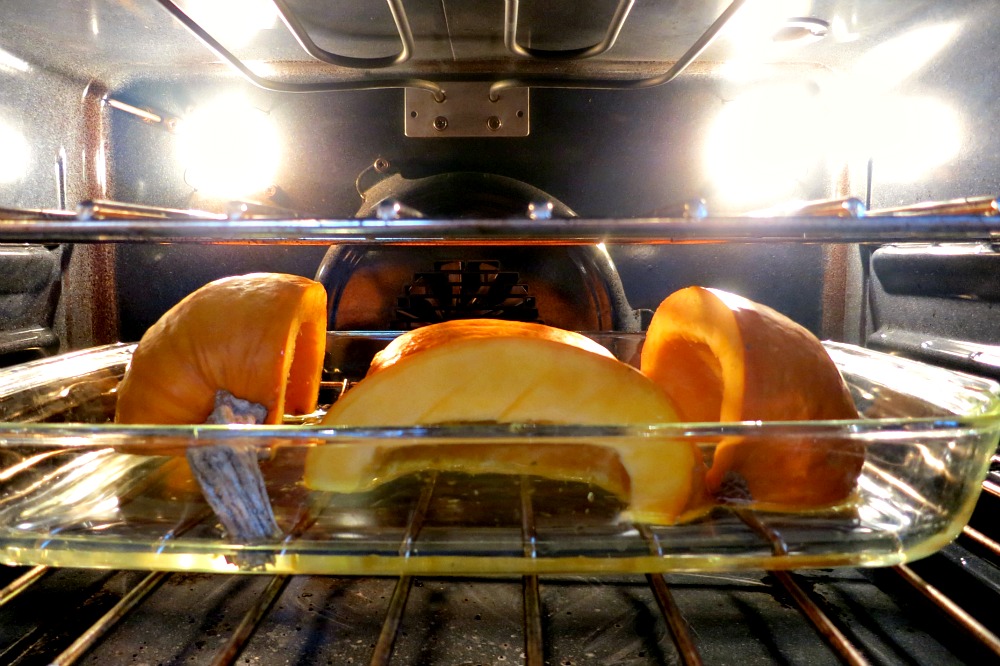 To tell if it was done, I stabbed my pumpkin with a fork, and it easily punctured the skin, which by this time was starting to look all dimpled and wrinkled. I could insert an old age joke here, but karma has already caught up with me once, and I don’t want it to happen again. I removed my pumpkin parts from the oven and since I’m not a fan of third degree burns, I let them cool for at least thirty minutes before moving onto the next stage.

Once the pumpkin pieces had cooled to a desirable handling temperature, I scooped out the flesh and in some cases, just peeled the skin off in huge chunks. The texture of the pumpkin reminded me of mangos: thick and stringy (this sounds so appealing), and I deposited the flesh right into my food processor. 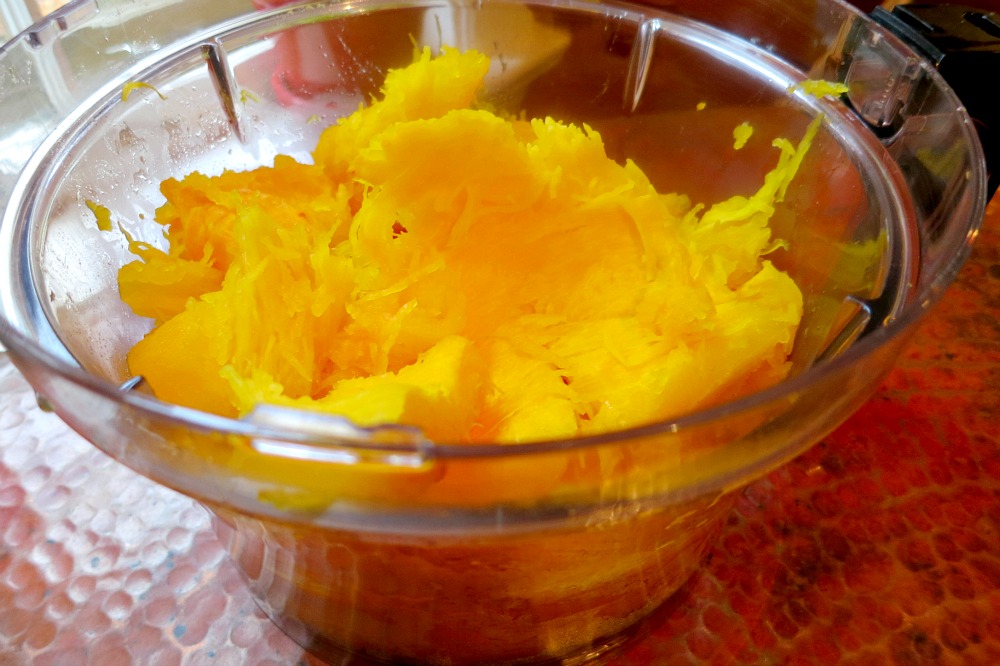 I let it run in the food processor for a good number of minutes, on high, until it was smooth and creamy (now that’s better). At this point in the process, I decided to taste the puree, and if I’m being honest, it was bland. It tasted nothing like pumpkin pie at all ( 😉 ) ; I was disappointed. Still, I forged ahead. 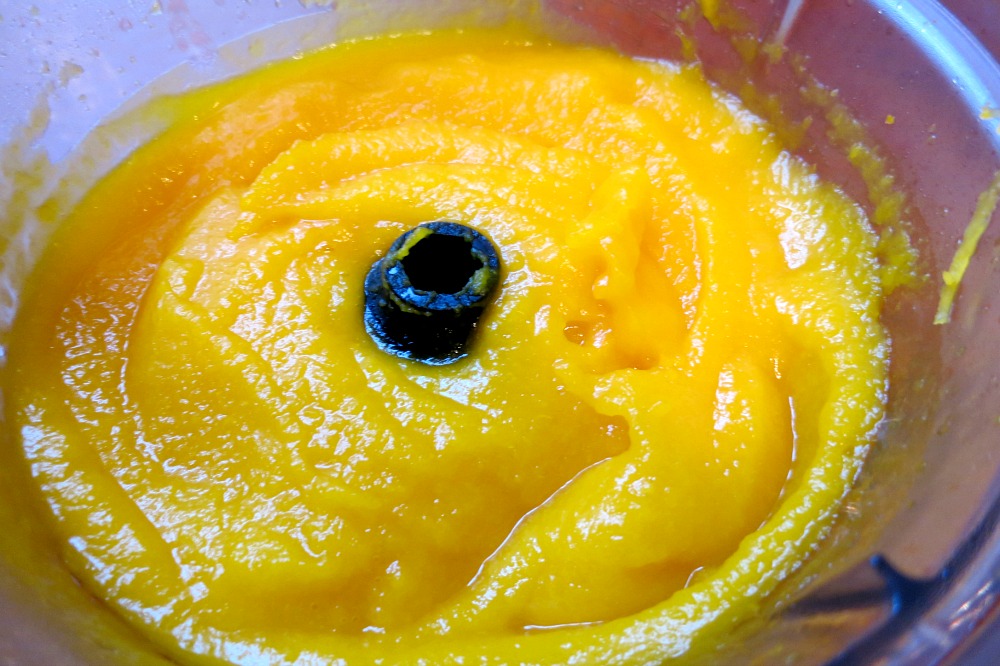 I read that pumpkins are full of water and need to be drained so I put on my MacGyver hat and got to work. Using a fine mesh strainer, set delicately on top of my ginormous four cup measuring cup, I lined the strainer with a wet paper towel and then I dumped my pumpkin puree on top, allowing the liquid to work its way out of my puree. I let this contraption sit on the counter for a couple of hours, occasionally mixing the puree with a spoon, and when it was all said and done, I was left with over a cup of “pumpkin juice.” Any ideas on what to do with the excess liquid? Seriously, all things Harry Potter came up when I googled it.

I was also left with roughly three cups of puree. Cue music…”Celebrate good times, Come on! Let’s celebrate. There’s a party going on right here a celebration to last throughout the years. So bring your good times and your laughter too we’re gonna celebrate your party with you!” 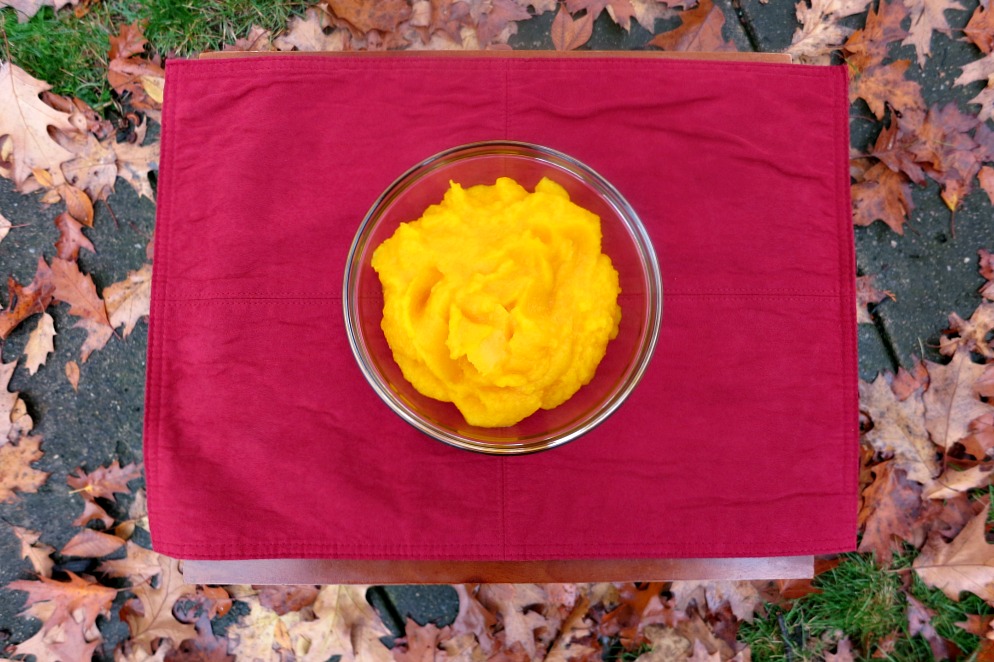 I cannot believe after four long and trauma filled weeks of my pumpkin mocking me, he has been transformed. Much like that horrific reality show, The Swan, I have taken a rough and tumble pumpkin and altered him for the better. The end result is…drum roll please….baby food. 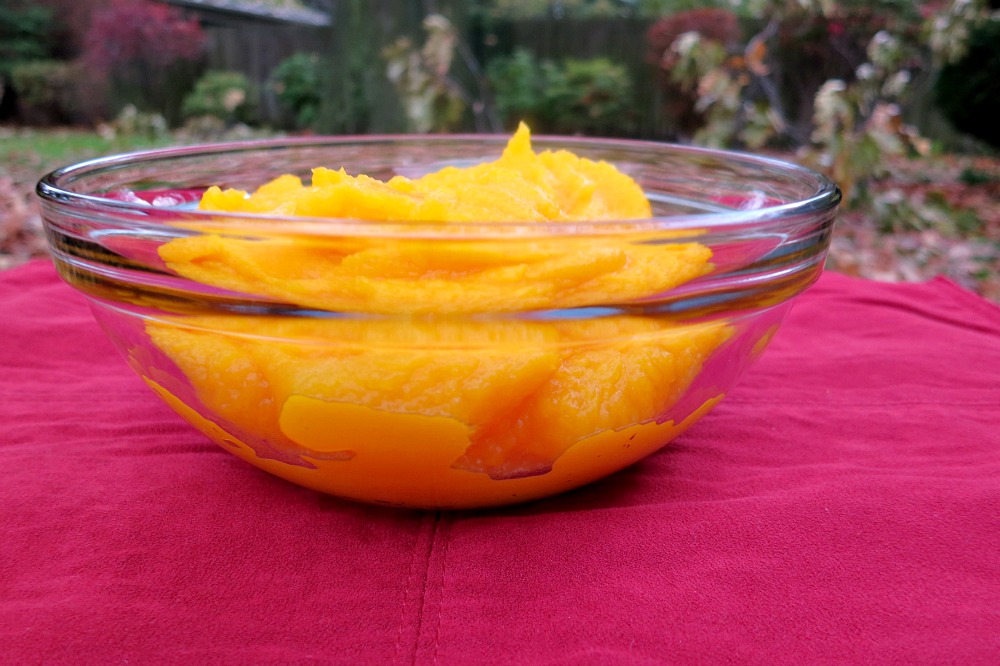 Yes after several hours, albeit mostly hands-free hours, I made baby food. Too bad, I have no babies which to feed my mushy orange puree.

All jokes aside, I used two-thirds of my puree in a Coconut Pumpkin Soup which was out of this world delicious. More on that later.

Have you ever made pumpkin puree from scratch? Would you? Did you feel like the king of the world when you were done?  Pumpkins aside, what did you make this weekend, and what’s your favorite thing to make from scratch?