You are here: Home / Bottoms Up / Strange-Ish But Good

Here’s the thing. I really want to participate in Laura’s Strange But Good link ups, but my food isn’t all that strange. I’m serious. You should see what these other ladies eat: peanut butter, jelly and eggs….um, no thanks. I’m sure it’s great, but I’m too scared to try. My issue, not theirs. I still want in on the weekly link up party though because Laura’s pretty funny. She eats a trillion meals a day and bench presses three times her body weight. Truth time, I have no idea how much she bench presses, but she’s in killer shape. By killer, I mean her bicep could swallow mine whole, although she seems really kind and sometimes snarky, which I adore, so I think her muscles will play nicely next to mine. Think being the operative word.

Also, I want to go to the party, dammit. Seriously, if you’re having fun over there, I want to be a part of it. Cue Ke$ha: ♫ “Now, the party don’t start ’til I walk in.” ♫ It’s a complete myth that introverts don’t like to party. I call shenanigans because I love a good party (especially of the dance variety) so long as I’m mentally prepared for it going in and have a de-stress plan for after. Also, a blogger party is different because I don’t even have to leave my house.

I decided to heck with the rules (Sorry Laura; feel free to scold me) and join in on the fun anyway. While my actual submission dish may not be strange, the cooking process most definitely was, which is how I justify my entry. Justification is one of my specialties. For a small fee (it could be monetary, although I accept food as well), I could help you create a logical and wonderful justification for almost any scenario…I should have been an attorney.

I submit to you Indian Butter Chicken Stew with a grab bag of veggies and the real reason this dish is strange, which is simply that I made it. See, I don’t eat meat, so while I made this dish from start to finish, I didn’t even so much as try it because I’m a vegetarian. No meat for me, but plenty of meat for my Hubby. Silly carnivore.

I started off with a jar of Patak’s Authentic Indian Butter Chicken Sauce, which I threw into the Crockpot, along with some chopped radishes (I still have a ton of these from my CSA), a diced onion, a couple of cloves of minced garlic, a carrot, and a stalk of celery. I then proceeded to boil two chicken breasts, so I could ultimately shred them and add ’em to my Crockpot. Boiling chicken, even if you’re a fan of chicken, is pretty gross. Sorry, it’s just weird how white it turns the second you drop it into a pot of boiling water. And the fat that accumulates along the top is gnarly. I’m really selling this dish, aren’t I?

In any event, the chicken came out fine and looked succulent and moist when I tore it apart with two forks. I know the word moist shouldn’t be a part of a food blogger’s vocabulary, except I think it’s kind of fitting when you’re talking about meat. While I can’t actually verify the taste myself, I could see the texture, and it was spot on (is that better?) because even I know there’s nothing worse than rubbery chicken (well except maybe factory farm chickens).

Bottom line, the Hubby loved it, and he absolutely raved about it. I also happen to think making the Hubby an all meat dish, which I have no intentions of eating, is pretty romantic of me. How’s that for working on my New Year’s Resolutions? 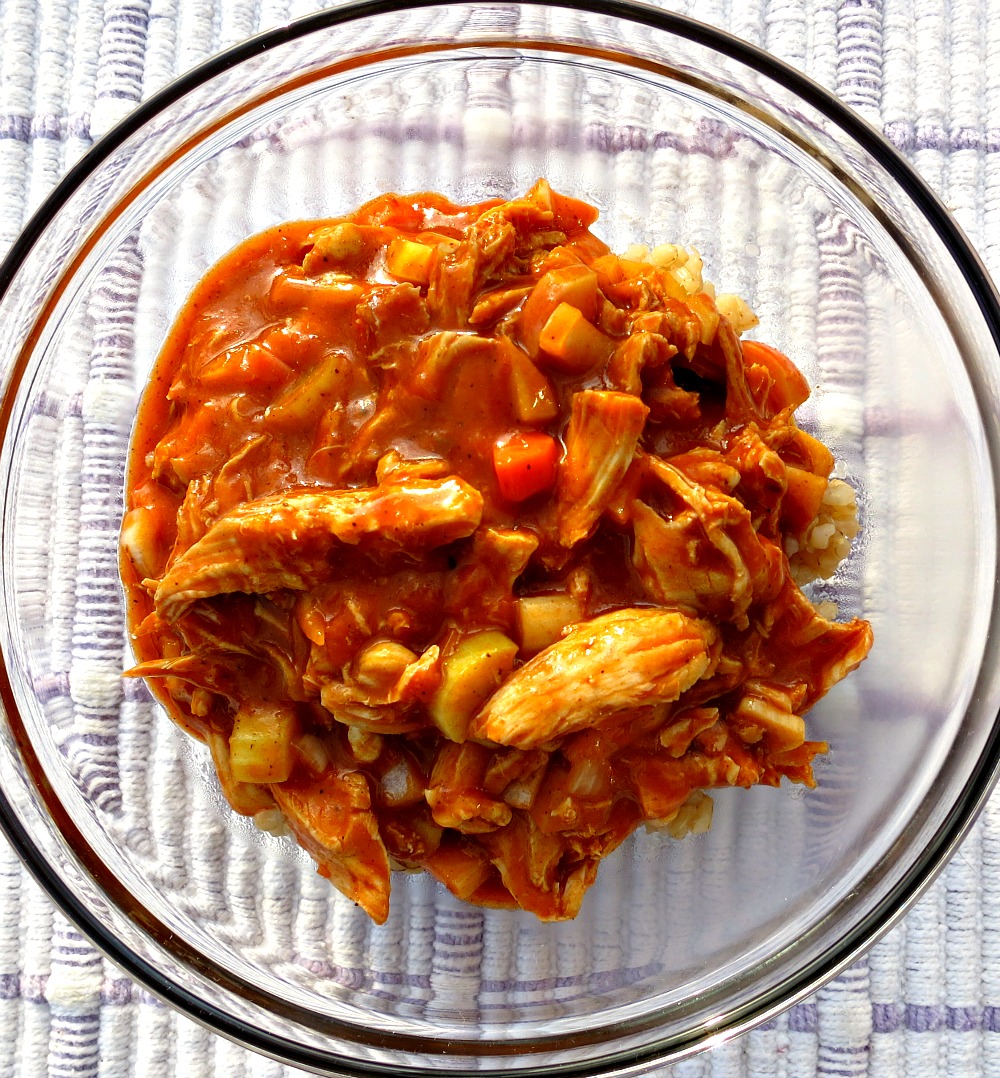 Just in case, my stewed chicken, even though it was made by a Vegetarian, doesn’t qualify as strange enough, I also made and drank carrot juice for the first time yesterday. I’m not sure if this actually qualifies since I don’t find it strange, but then again I didn’t think my Beet Juice Mimosa’s were strange either, although you most certainly did. I’ll never forgive you….just kidding. 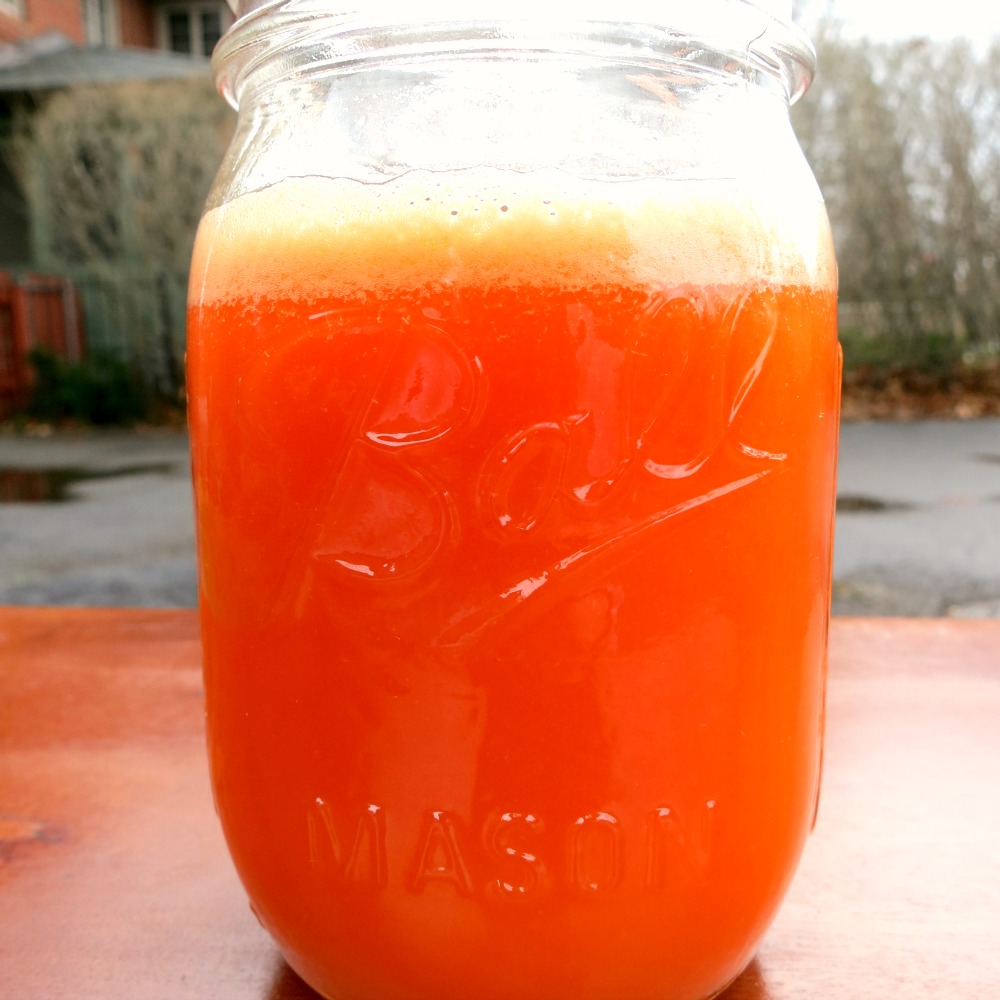 This picture really doesn’t do the juice justice because it was super good: light, sweet and airy. What this picture does have going for it is the word Ball etched across the front. It always makes me smile, especially when I’m drinking it down.

What’s the strangest thing you’ve ever put in your mouth? Would you prepare meat, even if you didn’t eat it? Are you a master at justification too? We could host seminars.