We are well overdue for another CSA Update. I’ve received two more weeks of goodies which I haven’t shared with you yet; how mean is that?! In truth, I’ve been too busy blogging about other fun and completely random things (WTB, which some people suggested means my inner psyche really does want a baby…only time will tell).

In any event, we are now eight full weeks into the CSA program, and it’s worth mentioning CSA’s are truly their own evolutionary chain where only the strong survive. They can be tough, and they most certainly are challenging. You have to stay the course if you plan to make it out on the other side, or really just eat your produce before it goes bad. Case in point, here’s an actual conversation between the Hubby and I from this past weekend:

Me: I was thinking for dinner tonight we should…

Me: Still no. We have a zillion veggies, we need to stay home and eat them.

Hubby: Oh…can we have Gelato later then?

Since we had two weeks worth of CSA produce waiting to be used, you understand why I had to deny the Hubby his pizza. Last weekend’s eats, which included said pizza, grilled cheese, and crackers and cheese (no veggies used here) was half the reason we were in this predicament. You absolutely can take a night off from your CSA. In fact, it’s imperative you do because everybody needs a break, but we took off about five nights, when you factor in my spinach salad cravings (while they were veggielicous, they weren’t from the CSA), so now we have to step it up, get our asses in gear, and eat our greens, reds, whites and yellows.

Here’s our lovely week seven CSA share; the odd hairy thing in the upper left hand corner is fennel. Mr. Fennel is still sitting in my fridge waiting for me to come up with a plan, and at this moment, I’ve got nothing. Let’s talk about what I have used though: the zucchini made their way into last weekend’s Zucchini Roll Ups, which then made their way into the trash (Boo Hiss!). They were weird, and weird food freaks me out. I easily used up the cucumber in the Hubby’s lunch time veggie wraps and my spinach salads, and the pickling cukes are pickling as I type; they should be ready by Thursday. I tapped into the tomatoes for my spinach salads, but still have half a container left. And when I denied the Hubby pizza, it was to make green beans instead. It’s not as cruel as it sounds; the green beans were fabulous because they were smothered in walnuts and blue cheese, and I served them along with some garlic covered asparagus.

By having a predominantly green dinner (I also put down a fried egg while the Hubby had a burger topped with another fried egg), we figured some guilt-free gelato from The Sweet Spot was definitely in the cards. I skipped the traditional bowl of gelato and went for the Tartufo instead. Say what? 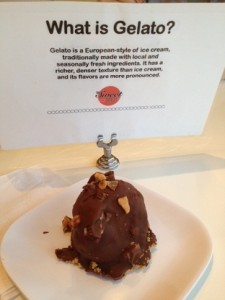 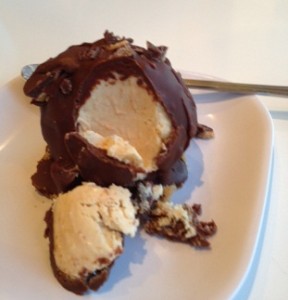 Ex-squeeze me. Baking powder. It was freaking awesome. There is a really good chance the Hubby and I will be going back for this little puppy again (like tonight!). In case you need one more reason gelato is amazing; it’s made with milk instead of cream, so it has half the fat of ice cream. Don’t get too excited though, the other main ingredient in gelato is sugar, so be prepared for a rush. This is me, without make up (!!!!), enjoying every single bite of my Tartufo. If you try to take it away, I will stab you with my spoon. Sugar highs do crazy things to people. Exercise highs are so much better and saner, but remember all good things in moderation.

Even after factoring in the gelato, the end result of week seven’s CSA share is we still have tomatoes, fennel, patty pan squash, a green pepper and an onion to be cooked and eaten (seems like a lot; eek). We have hardly touched week eight’s share either, but this is a pretty sweet week. 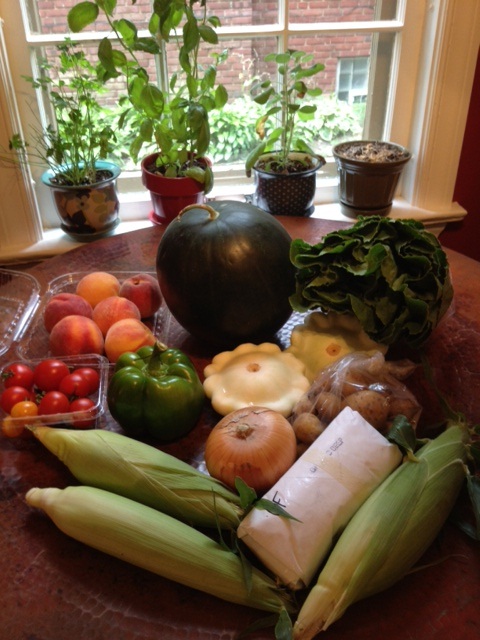 We got not one, but two types of fruit: peaches and a watermelon. Success! We also received a bundle of lettuce (romaine this time), more patty pan squash (hence the desire to stuff them), sweet corn, another onion and bell pepper, some more tomatoes and even some pretty little potatoes. It’s shaping up to be a good week, so I need to stop typing and start cooking. Until next time, mes amis.

« Open Weekend
A Picture is Worth a Thousand Words »