You are here: Home / Bottoms Up / From Jonesing to Juicing

I mentioned in an earlier post I was suffering from sugar withdrawal.

As a result, I decided to do a little at home detox, and what better way than juicing, and I don’t mean pump me full of steroids, roid rage kind of juicing either. Instead, I’m talking about consuming your fruits and veggies in liquid form. Sounds weird, right (I’m guessing it’s negative counterpart is more common)? I have always been a little fearful of liquid veggies and usually don’t venture outside my fruit smoothies, except for my solo green smoothie earlier this summer. 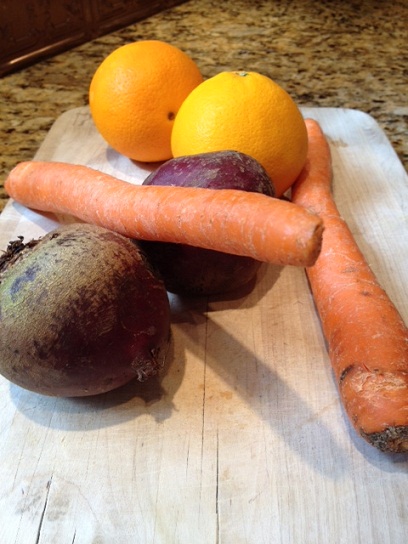 Truth be told, I probably wouldn’t have even tried “juicing” if we hadn’t received beets in last weeks CSA share. You see, I have a checkered past with beets and by checkered, I mean I don’t like them. I’ve made them into chips with a little goat cheese and also turned them into a pasta sauce, and both times, I was less than thrilled, which loosely translates to I couldn’t eat either. “Beets me” because the two us, we’re not friends.

However, one of the downsides (and sometimes it’s also a perk) of participating in a CSA is you don’t get to choose your produce; it picks you (like soul mates or star-crossed lovers). Now I’ve seen the movie Beetle Juice, I’ve read about beet juicing before, and know it can be done. People do it on the internet all the time (snicker, snicker). Hell, Heather at Kiss My Broccoli turned them into a parfait a couple of weeks ago. 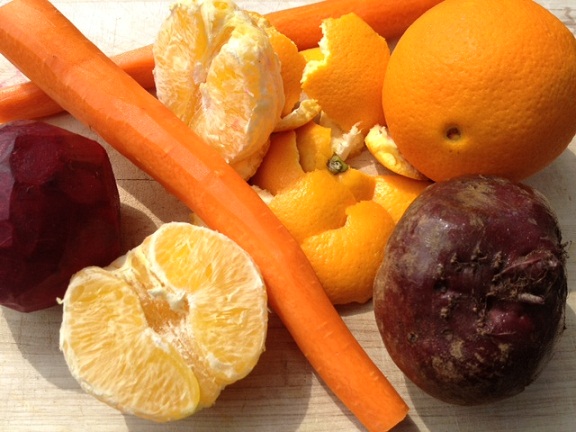 So when I picked up beets in our most recent share, with hands still twitching from sugar withdrawal, I figured it was a sign. Would there ever be a better time? Since I had beets (rhymes and rhythms) and weird crap in my system that needed to be purged (Out, damned spot! out, I say!), I decided to throw caution to the wind and go for it.

The instructions I’ve seen for beet juice are sketchy at best. None of them say whether the beets should be cooked first or even peeled, and some of the recipes are crazy intricate, while I was aiming for simple detox. The recipe I ultimately went with was from http://www.juicingcafe.com/best-beetroot-juice-recipes-healing-qualities-of-beet-juice-recipes and included 2 beets, 2 oranges, and 2 carrots. Basic, simple and what I wanted. While I decided to leave the veggies raw, I did clean and peel them all first. I also added some orange juice for a sweetener, and after a quick taste test, I threw in half a lemon to cut the beet flavor, which is normally described as “earthy” (read dirt) and some ice to keep it nice and cold. If I’m going in, I’m going in cold. 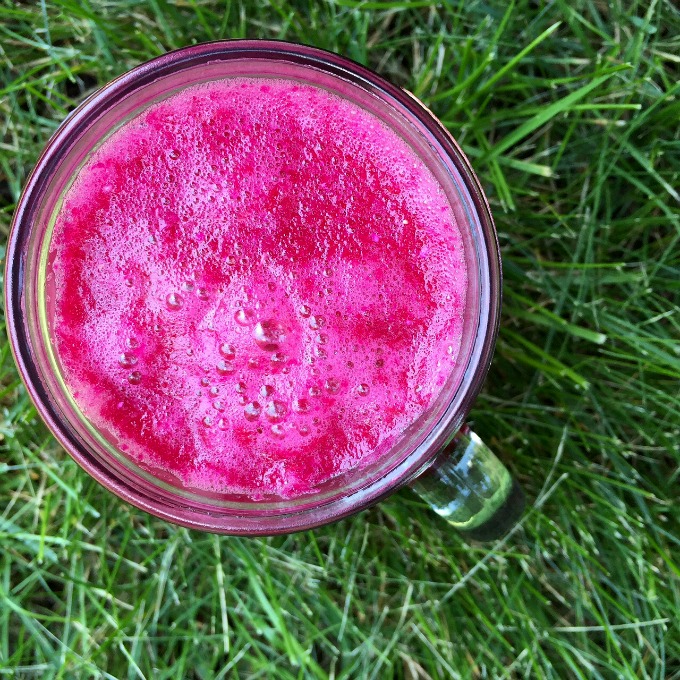 What I mean to say is it grew on me with each and every sip I took (like a strong drink), and I was mesmerized by the flavor. It wasn’t a blow me away with thing, but it definitely wasn’t bad either. As I continued to ingest my juicing concoction, I was strangely pleased with the drink and myself (my ego rears her sweaty head). It was weird and fascinating all at the same. I guess the best indicator is I went back for seconds, and so did the Hubby. We also made more the next morning, and I’m actually looking forward to getting more beets in our share. Who knew? Juicing is oddly addicting and strangely satisfying (again not the roid rage kind, although I’ve heard you can use the same adjectives to describe it).

Plus, the health benefits from juicing are amazing. It acts as a blood purifier (wish I knew that in college) and helps to replenish red blood cells. It is also known to reduce high blood pressure, cleanse the liver and kidneys (this is huge; these organs are vital), and increase the presence of cancer destroying cells in the colon. So, how do you like them beets? We could start a new catch phrase here.

Me, I think I like them just fine. So does the Hubby too because he wants to know when we’re going to have “that drink with the veggies” again. 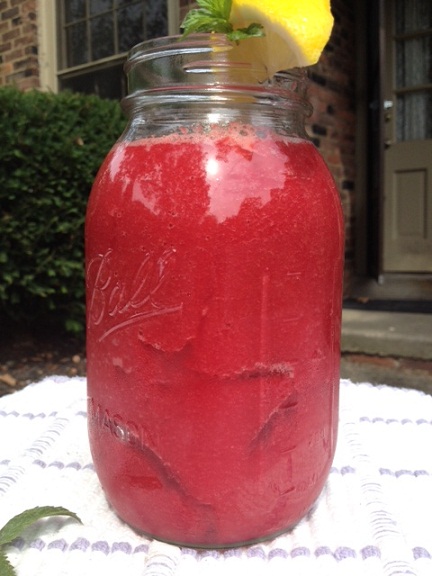 I chose this particular mason jar because it says Ball across the front (giggle, giggle). If that’s wrong, then I don’t want to be right.

Have you tried juicing before? If so, what concoction is your favorite?  Any suggestions or tips for me?