You are here: Home / Bottoms Up / Put Down the Soda, Back Away From The Can

It’s been a long time since my last tirade, so I’m definitely past due.

Combine that with the fact, I finally watched the last installment of HBO’s The Weight of the Nation and life just bitched slapped me (more on that later), and my watch says it’s time to rage….or rant, so here we go. Cue angry hip-hop: “You can hate me now.. but I won’t stop now.. Cause I can’t stop now.. you can hate me now.” I’d share the full clip, but it’s a wee bit inappropriate and too strong for my present state of mind since I don’t want to give anger more than it’s fair share of my energy. Instead, I’m going release it by writing about it, so Happy Monday to you. I hope you enjoy my binge and purge session (verbally this is great, food-wise, it’s never ok) or at the very least return tomorrow to the calmer, gentler Meghan who believes in peace, love and bunnies. And unicorns. Do not forget the fucking unicorns.

I don’t care if you are too skinny, overweight, average, or obese, you need to put down the soda pop. Unless you drink that stuff once in a blue moon, you have to stop. It’s that simple. Alright I’ll be honest, if you drink this vile sludge all the time, then it’s not simple because anytime you give up an addiction, it’s gonna be hard, but soda is one of the worst things you can put in your body, especially if you are drinking diet, which is an entirely different post for a different day.

Giving up soda is one of the best thing’s you can do for yourself. Don’t believe me…try it for a month and see how you ultimately feel. I promise, once you get past the withdrawal, you’ll be and feel better for it. I know because in a former life, I used to drink it all the time. True story. I spent college and many a year post schooling drinking soda, and I was also flabby and lazy. There’s a correlation.

Nothing good comes from soda pop. It is 100% empty and worthless sugar calories. Literally, it is devoid of any and all nutritional value. Check out the stats on a can of sugar, er I mean pop. Other than the sugar and carbs, the rest of the numbers reflect big fat zeros, since there are no nutritional benefits in it. I repeat you are not doing your body any favors by drinking that swill. I might not eat meat, but I can at least see the nutritional benefit of doing so (vitamins, minerals, and protein…oh my). The same can actually be said for most candy bars (not that I’m advocating these), but not soda pop because let’s hear it, all in one strong voice now: nothing good comes from soda pop.

Simply put, soda is a boat load of crap, and here’s a few reasons why: http://voices.yahoo.com/ten-reasons-quit-drinking-soda-pop-219521.html?cat=51

My advice is put down the soda and back away from the can, as fast as possible.

This stuff is toxic, and it pisses me off. I’m more angry with the soda companies than I am with the average consumer who drinks soda (although if you still drink it regularly after reading this post, then you are on your own). I’m furious with the likes of Pepsi and Coco-Cola who knowingly sell a product which is 100% bad for you, but they also market the hell out of it and profit immensely from it. They are getting rich and making us sick and fat all at the same time. They should be so proud…

Imagine if the tobacco companies could advertise in the same manner…oh wait, they used to do that. Remember Joe Camel, the cartoon character who sucked down cancer on a daily basis, and my personal favorite: candy cigarettes. Now they call them candy sticks, but back in the day, they were full-fledged cigarettes and little children walked around pretend smoking. I was one of those little tykes, and this does not make me old (shit, maybe it does). In today’s society, a toddler and a smoke would be considered child abuse, but no ones bats an eye at a three-year old guzzling Pepsi, and we wonder why diabetes is on the rise in children. This has to change.

We have to start seeing soda for what it truly is, which might not happen until they stop marketing it like the second coming. Case in point, American Idol and the X Factor, nice kid friendly shows, might as well be pimps for the soda companies since their logo is plastered everywhere.

Don’t you ever wonder why it’s always shown in a cup and not just the soda in its original vehicle (a can or plastic bottle)? Sure, the mammoth-sized cup looks nicer, but I’d bet money it’s because they’re not drinking soda. These judges have enough people on their payroll telling them to stay away from pop, and let’s be honest, their skin is way too clear to actually be downing Pepsi on a weekly basis.

Well, that’s it for my little tirade; I even exhausted myself. Since I ranted about the dangers of soda, let me give you some type of replacement because it would be cruel not to. Plus, I figure if you made it this far in today’s post, then you deserve a substitute.

So the easiest and best way to replace your soda is to drink water. Straight up pure and simple water. Not only is it amazing for you, but it also has zero calories and just happens to be free (now you’re talking).

If you think water is boring all on its own, then spice it up. Add some lemons, limes, cucumber, mint, strawberries, whatever suits your fancy or floats your boat. 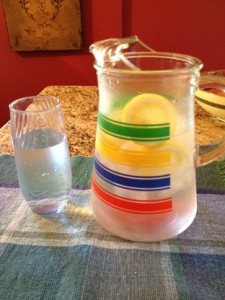 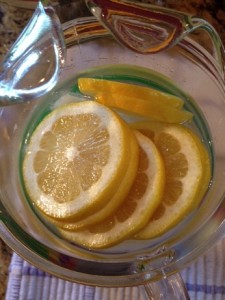 Now that I’ve gotten your attention, please, I beg you, put down the soda and back away from the can. Your body and your mind will thank you. Try it, I promise.

Do you still drink soda? Would you ever give it up? If not, what’s your go to replacement?

« CSA Another Week Down
Getting Grateful »