You are here: Home / Good Eats / The Story of the Sweet Potater Tots
On Saturday night, I surveyed the fridge and pantry and contemplated what to make for dinner. I had a few sweet potatoes on hand, and oddly enough, mayo and sour cream in the fridge. These are definitely not staples in my house, and their sell-by date was fast approaching, so I figured a dip of some sort was in order (all good things in moderation). I hopped onto Pinterest and discovered a recipe for Sweet Potato Goat Cheese Tater Tots with a spicy dipping sauce.  Score! 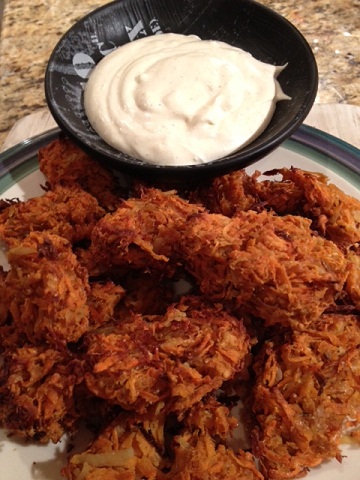 So pretty, yet so misleading.

Houston, we have a problem.

How is it that something which sounds so good and looks as tasty as this, can go so horribly wrong.

Let me start by saying this is a weekend project. It’s not a quick dinner or side you can throw together after work. Start to finish, it took about 2 hours with a lot of labor and a little bit of cussing. I like to cook so I don’t mind some heavy lifting in the kitchen, but it might not be the best idea when I spent 5 hours moving mulch beforehand (yes, we moved mulch all day Saturday too. We know how to party.).

I started out by reading the recipe start to finish.  I always do this because I like to know what’s coming.  No surprises for me.  I realized right away it was a big job, so I enlisted the Hubby, poured a glass of wine, and cranked up the music. Things started remarkably well.  I grated the spuds and gave my right arm a serious workout. 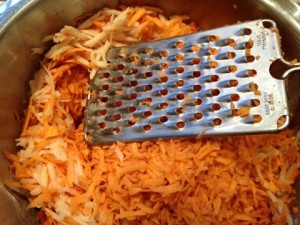 Have you ever grated sweet potatoes before? It’s hard, hard work. Next, the Hubby and I took turns squeezing out the potato juice (weird) using a colander and some towels.  It was a long and arduous process, so if anyone has a better way, and I’m sure one exists, please share it. Then, we mixed in the flour and cheese before forming the mix into tube like shapes. 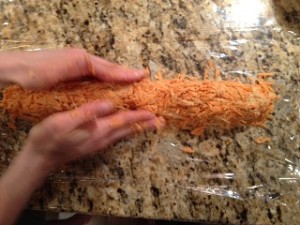 This is me, shaping the potatoes into tubes.

We ended up with three in total, which we wrapped up and deposited into the freezer for the recommended 30 minutes. While our pretty little spuds solidified into the great tater tots we still thought were coming, we put together the dip: equal parts mayo, sour cream, Greek yogurt, cayenne pepper, salt, pepper and curry powder.

Things were progressing nicely, or so we thought.  We removed one of the tubes from the freezer, and it all went downhill from there. We expected them to come out of the freezer solid and ready to cut into tater tot sized bites, but they had other plans. We made our first cut, and immediately they fell apart. I’m still not sure what happened, although I have a few guesses.  Either a) we didn’t freeze them long enough, b) we didn’t remove enough potato juice, c) both a and b, or d) it’s just crap. My vote is on C, although I’d settle for D. 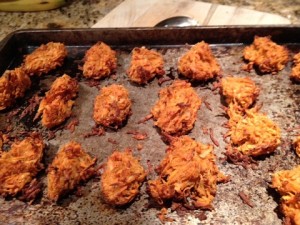 Not one to throw in the towel, I shaped them all out by hand.  And then baked them on a greased cookie sheet for about 40 minutes flipping them once and massaging them twice. Yes, massaging them because when I checked in on them, they were falling apart and I had to put them back together again and again.  I don’t recommend touching hot potatoes either.  It’s a great way to get hurt. Still, I soldiered on, unmoved by the extra work and the first degree burns because I knew they were going to be worth it. I could smell them baking and folks, let me tell ya, we had a winner here. Boy was I wrong.  After all our efforts, we sat down to dinner at 9:00 p.m. (I don’t advocate eating this late unless you’re on vacation), and with spoon in hand (they were still too crumbly to eat any other way), we dove in.  And………Drumroll please………..they were just “Eh.”  That’s it; not horrible, definitely not great, just “Eh.”

At this point, I would humbly (ok, maybe not humbly) admit defeat. But I still have two potato tubes in the freezer, waiting to be cooked.  And half the work, albeit the easy half, is already done.  So, I’m going to have to make some edits, doctor some things, but consider it game on.  Round one goes to the sweet potater tots.  Round two is up for grabs.