You are here: Home / Bottoms Up / WIAW: The Beach Edition

I wasn’t sure how successful I’d be blogging on vacation, but there’s something so relaxing about being on the beach and the availability of the neighbor’s Wi-Fi really helps. I also didn’t want to miss an exciting episode of WIAW hosted by Ms. Jenn at Peas and Crayons. As always, thanks for sponsoring this great weekly food fest. 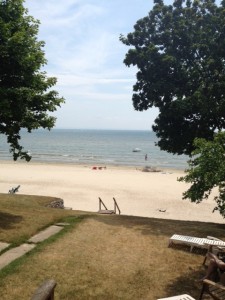 Our view from the cottage. Miles and miles of sand.

Since I am beaching it with the family this week, I’m sharing mine and some of the family’s Tuesday eats. Just so you understand how serious we are about food, we couldn’t purchase our tasty morsels all at one location. Oh no, not us; we made special and separate trips to the beer store and the wine store (we don’t play). We also hit up the Meat Store for carnivore food and cheese, followed by a stop at the local grocery story for produce and paper products. I’m pretty sure the Hubby was in his own meaty heaven picking out all the different cuts of meat. Needless to say, I went to the wine and grocery store.

My morning started the same as every morning, with a cup of joe, although I enjoyed it a few hours later than usual. I love sleeping in, and by sleeping in, I mean 8 a.m. I’m a rock star; I know how to party.

I was happy to find my friends in the north like almond milk and raw sugar just as much as me. After my morning wake up call, my twelve year old niece and I knocked out a quick

Tank Top Arms workout followed by this lovely little gem, which should make our legs long and lean. She picked it out from my Pinterest account and I really like this leg workout; it was quick but still challenging. We had to break the jumping jacks into two sets, but no one’s keeping track. It’s all about the effort, and while we worked our arms and legs, my sister hit the bike trail and went for a long ride, while my dad did his usual daily run (and I do mean daily). The family that works out together stays healthy together….and then gets to indulge in cocktails and desserts later.

I met my mother at a restaurant in the city for breakfast, where I ordered a Breakfast Burrito stuffed with scrambled eggs, black beans, onions, peppers, tomatoes, and Monterey Jack cheese along with some home fries. The burrito was pretty good; although the home fries were a little overcooked, so I only ate a third of them. I washed it all down with a glass of freshly squeezed orange juice and some aqua. 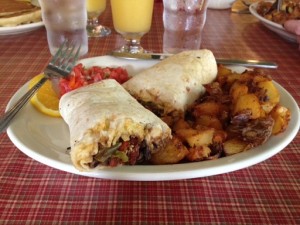 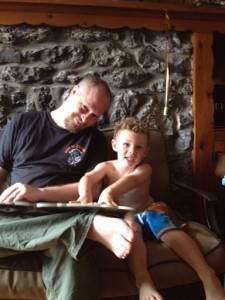 My brother Colin and my nephew Max.

After breakfast, I went back to the beach and played with my three year old nephew for a good hour (it felt like three: Kudos to all you mothers out there). He was a little ball of energy and cuteness. We played “Let’s Splash Aunt Meghan,” and “Time to Chase Max.” Bottom line, I got my cardio in, and who can resist this cute little face. He is super adorable and best of all, the most well-behaved kid I’ve ever met. Granted I haven’t met many, but this kid is good with a capital G. We took a break from playtime to have lunch and since I had really just eaten breakfast, I opted to snack on some fruit instead; my favorite and perfect for those 90 plus degree days. 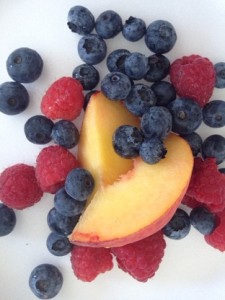 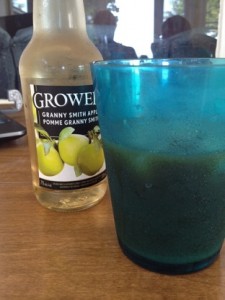 Staying in line with my fruit theme, I had a hard cider (or two) followed up with some iced coffee later in the day. I also drank lemon and lime water whenever I wasn’t sipping on cider or coffee. It’s important to stay hydrated, especially between cocktails.

For an afternoon snack, I had a hard-boiled egg and some Energy Bites because the Hubby and I brought along a double batch. After snack time, we hit the beach and Lake Erie again. We swam, played a little softball and swam some more. I took a quick cat nap late in the afternoon and woke up just in time to enjoy some dinner. 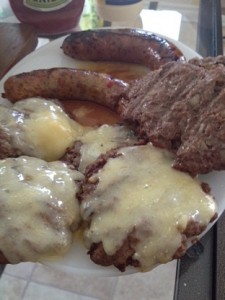 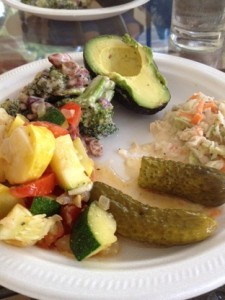 The carnivores (i.e. everyone but moi) had some burgers and brats, while I dined on multiple veggie salads, an avocado and pickles. I didn’t want to miss out on utilizing everything in our CSA just because we were on vacation, so I smuggled some produce across the border. I sautéed some zucchini, squash, onions and tomatoes in olive oil, and I also made an enormous bowl of coleslaw with the cabbage and kohlrabi we received in our week six CSA share. A simple vacation can’t keep a good CSA girl down. And yes, this is what a kohlrabi on steroids looks like because it was bigger than a softball. The Hubby refers to the kohlrabi as an Octopus; he’s a little freaked out by the tentacles. This coming from a guy who eats alligator, bison and duck. 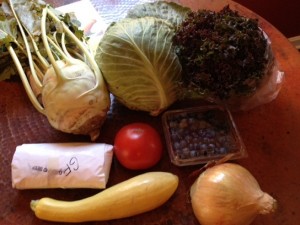 The only thing actually remaining from our CSA shares, and I do mean from all the weeks, is the lettuce, which somehow made its way across the border as well, perhaps in the trunk of my car, underneath a beach towel, so I think a nice green salad might be in order tomorrow. I haven’t had a salad since Saturday, and I’m really jonesing for one. Who would have thought I’d be hooked on salads. When they look like this though, how can I resist. 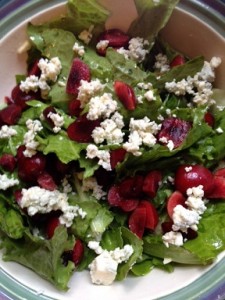 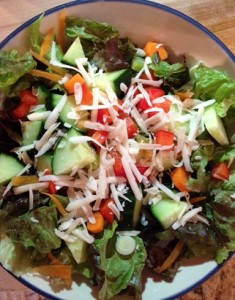 Well, that’s all for now. Signing off from Canada and sending a little “peace” your way.