You are here: Home / Good Eats / A Pizza in a Pear Tree

Yesterday I referred to watching the Ohio State game this weekend, but I left out the minor fact we had company over for the game too. Now I’m not much of a sports gal, and by not much, I mean I kick the Hubby out of the house for televised sporting events or I send him to a separate room to watch. When it comes to sports, the Hubby is a crack head and pretty much a full-fledged addict (sorry Boo; it’s true). To put it in perspective, the way we feel about food is how he feels about sports. Football, basketball, baseball, and who knows how many fantasy leagues he’s in; I lost track years ago. There are a few exceptions to my “no sports for me” rule (the Superbowl for one), and since we we’re talking about the hometown team on an undefeated streak, no less, I indulged him. Not only did I watch the game, but we invited friends over too. Did I mention he made my pie crust? 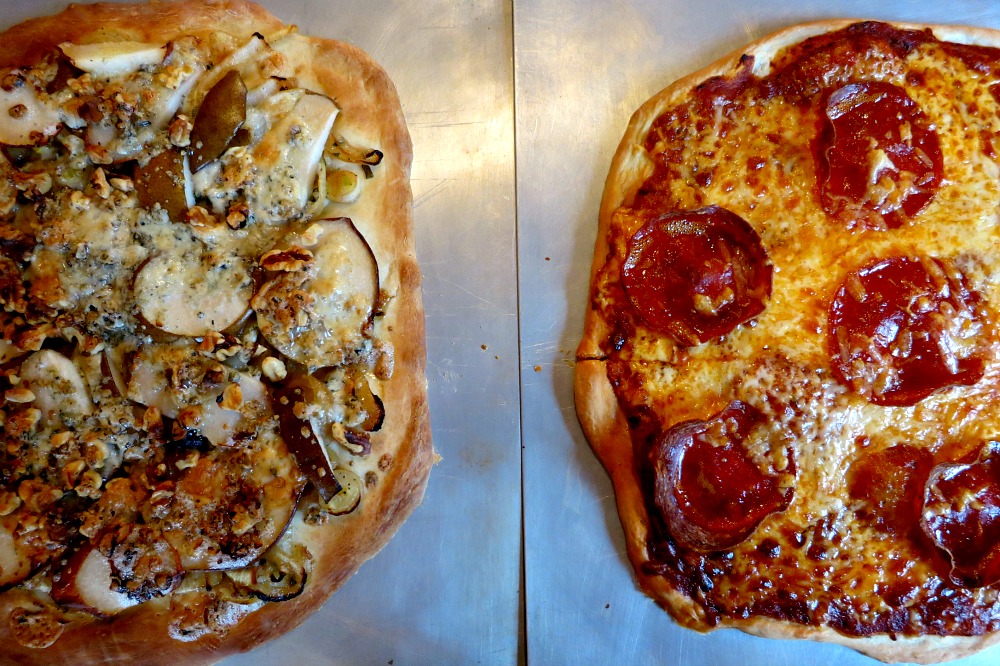 So I knew we were having company, but it wasn’t until Wednesday afternoon that I realized I’d have to feed them. Here’s how I found out….

Ring, ring…ring, ring (this is the phone):

Me: Whazzzzzupppppp.  Alright I was at work, so my greeting was likely more muted than that.

Hubby: (formalities and sexual innuendo aside) Diane wants to know what she can bring on Saturday.

Me: What can she bring? What do you mean? What time is this game on Saturday?

Me: Crap. Lunch time. We have to feed people.

Me: Uh, yeah we really do. Alright, let me get through Thanksgiving first and then I’ll think of something. Tell her to sit tight, and we’ll get back to her. This might have been tinged with a tiny bit more alarm and a dash of panic.

Hubby: We’ll just order pizza. Nothing to worry about.

It’s funny the difference between men and women. For men, it’s simple. Any food crisis or shortage can be solved with pizza, whereas for me, pizza is a last resort or a guilty pleasure, which I’m generally ok with, but not two days out from Thanksgiving. I’ve had my share of guilty pleasures and was ready to get things back on track. Scoff all you want, but there’s a reason the holidays are the most unhealthy time of the year, and this time around, I’m going to avoid that trap.

Seriously, I signed a “Healthy Weight Maintenance Pledge” at work, and if my weight stays the same from November 19th until early January, they will pay me $5 dollars in cold hard cash or maybe just a gift card to the coffee place downstairs. It doesn’t matter, because this year, I plan to collect. Join me if you want, although you’d have to do it solely for sense of pride and personal health and wellness because while my workplace is cool, I don’t think they’d pay you too.

In any event, pizza was out for me, but since I had no plan, I did what I do best. I pushed the entire incident from my mind for the time being (this is a great technique for not dealing with shit, although likely not psychologist recommended).

At some point in the middle of the night Thursday, I was awoken from slumber. My vision of unicorns, bunnies and apple pies was interrupted by a meal plan for Saturday. Of course, it was obvious. We’d have pizza; homemade pizza. With a plan in place, I reburied myself under the covers and promptly fell back asleep. 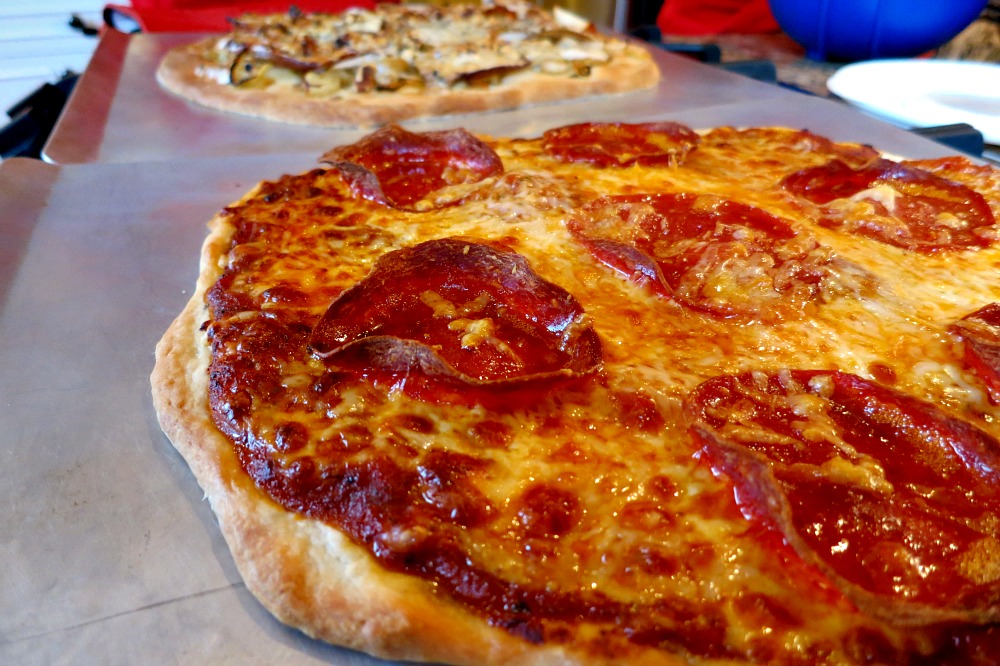 I made a traditional cheese and pepperoni pizza for our guests and the Hubby because you never know what people would be willing to try. There are some folks with weird food phobias (cough, cough, I was one of them for years), so I knew enough to have  a staple pizza ready. Loaded with cheese and pepperoni the size of my fist, this might not be the healthiest option, but it’s far better than anything the pizza delivery man would have handed me, costs far less, and since I wasn’t touching this pizza, what do I care? 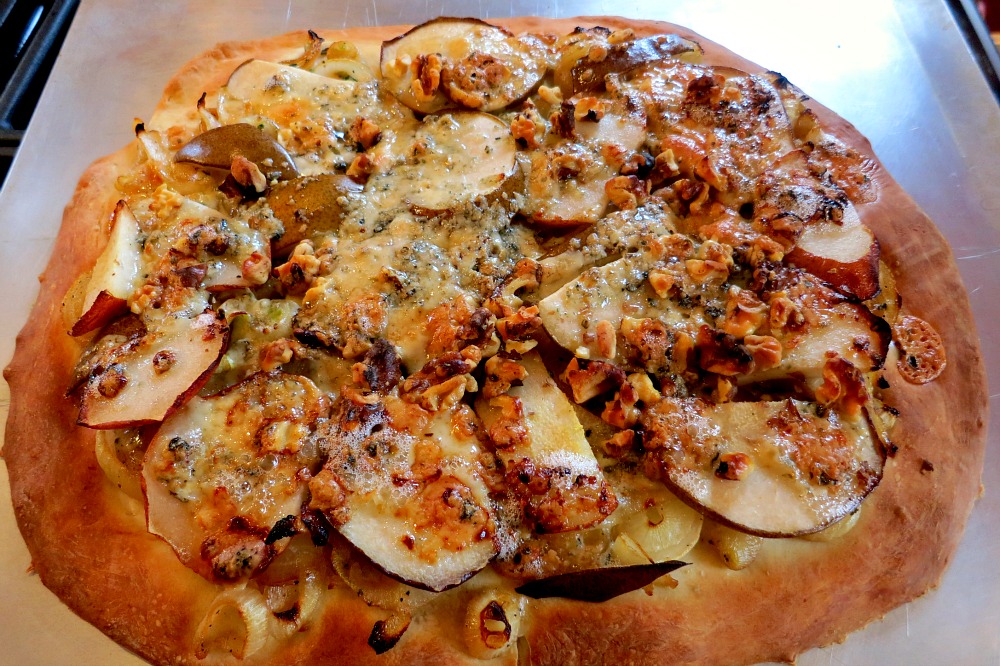 For myself, although I did share, I made this beautiful number: pizza topped with sautéed onions (the sauciest of sauces), toasted walnuts, freshly sliced pears and a mere half cup of blue cheese. When you spread the cheese over the entire pizza, it’s like having a tiny spoonful. Or if you devour a third of the pizza like I did, it’s less than a quarter cup of cheese, which I am entirely comfortable with, given all the other nutritional goodness taking place here. Calcium, Fiber, Omegas…oh my.

Not only did my guests try it, but they really enjoyed the combination of flavors. It was described as “unexpectedly delicious,” and while I’d love to take credit for the unusual flavor combo, this little gem came from Eating Well, one of my favorite food magazines. I could tell you this is the “adapted” version, but since I only changed the vehicle on which these delicious toppings are consumed (from flat bread to pizza dough), it’s safe to say, this one belongs to them. I don’t mind eating it though, and I certainly don’t mind recommending it. Go make this now; you can thank me later. One more reason not to hold back (as if you need another): pears are totally in season right now so get your eat on and celebrate local seasonal produce with me, yourself and Kristy at Gastronomical Sovereignty.

What’s your favorite pizza toppings? What are you doing to maintain your weight this holiday season? Anything? 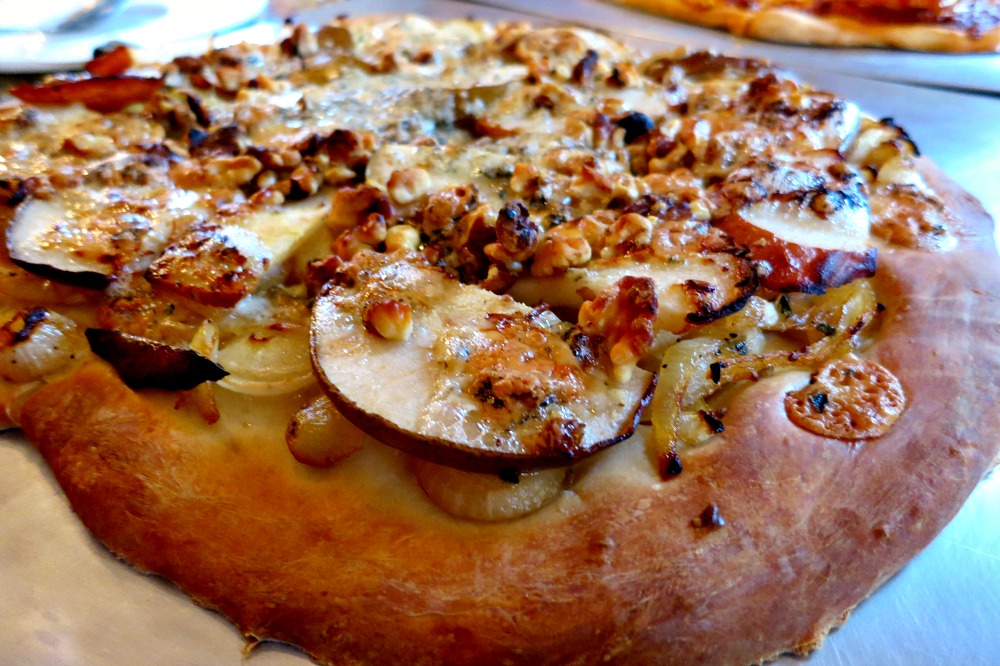