You are here: Home / Reflections / To Eat or Not To Eat Pesticides

To Eat or Not To Eat Pesticides. That is the question.

It’s been awhile since my last rant; far too long really (consider this your warning).

Now where did I leave my soapbox? Ah, there it is. A quick jump up and we’re off.

I have read all sorts of studies (more than I care to admit) on pesticides, and pretty much all findings show trace amounts of pesticides has been found on our produce, at least one-third of it. It’s important to note, trace amounts are considered acceptable according to the U.S. government, who are also the same folks who gave the seal of approval on meat glue and pink slime). While pink slime is not allowed in some other countries, nothing’s too good for us here in the States. We’re just so advanced or always looking for the cheap and easy way, no matter the cost (or really because of the cost).

Trace findings of pesticides is actually touted as a good thing since it’s just small amounts, and “the American Council on Science and Health, a nonprofit group that is partially funded by the food industry, and often defends chemical use, says pesticide worries are overblown and are playing on people’s fears.” http://abcnews.go.com/GMA/story?id=8315670&page=1.

Personally, I take issue with relying on anyone’s opinion when they are partially funded by the same folks using the pesticides. Call me crazy (or a conspiracy theorist, which is what they’ll have you believe), but I think there might be a conflict of interest here.

Hell, we wouldn’t even need the fancy pants organic label if we hadn’t chosen to douse our food in chemicals.

Regardless of how you feel about organic or non-organic, pesticides have been found on produce, so the question really is are they bad for us?

There’s a lot of folks who say pesticides aren’t dangerous or detrimental to us at all, especially in the trace amounts (again allowable by the government). On the plus side, using pesticides allow us to grow more food, by keeping bugs (“pests”) off the growing produce, which means we get to feed more people. More food = fewer people starving. See, you thought this was going to be all one-sided, didn’t you.

While preventing starvation is important and a worthwhile cause which I support whole heartedly (come to my house, and I will feed you), we have to make sure the food we are producing isn’t harmful. And some people think pesticides are incredible harmful. They say pesticides are ridiculously (in a bad way) toxic.

We need this guy (and I do NOT recommend this movie; sorry Brother).

The anti-pesticide argument is they lead to birth defects, disrupt endocrine and liver function (you really don’t want to mess with your liver), lead to weight gain, can cause cancer and depression, http://foodtrainers.blogspot.com/2011/06/just-how-bad-are-pesticides.html and a whole host of scary sounding shit.

So who do you believe?

It’s really up to you since you can find a study to support pretty much anything from one extreme to another: Pesticides are perfectly safe, pesticides will cause cancer and kill you.

For me, and this is 100% my personal opinion, I’d rather not eat trace amounts of any chemical whose purpose is to kill things. I wouldn’t eat or drink an insect repellent even in small quantities, so I’m thinking trace amounts of pesticides multiplied by the three to five servings of fruit I consume daily adds up to something I want to avoid when possible. But hey, that’s just me. If it’s something I don’t eat often or is on the Clean Fifteen list, then I might try to save a buck and go conventional. Not with fruit though. I eat way too much of it to have it be laced with anything, which isn’t actually food. 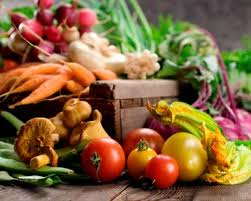 I will tell you when the Hubby and I switched to organic produce and moved away from processed foods, we both had health improvements. Whether it’s solely due to one or the other, or a combination of both, I can’t really say. I just know I feel healthier for it, and I like living this way so for the time being, I’m sticking with organic. Now if only we could make organics more affordable, which is an entirely different issue for a different day, especially since I think one rant a day is plenty.