You are here: Home / Bottoms Up / Strange But Good: Southwestern Pizza with Corn & Black Beans

Before I get right to it today, I have to say I’m just tickled pink with all your feedback on my Verbal Purge post. I’m hanging out with a Southern gal this weekend, so I thought it’d be appropriate to start working on my Southern phrases. Tickled pink is really all I got though, and I’m not even sure it qualifies as Southern.

I digress, in the middle of trying to thank you too, which makes for a fairly lousy appreciation bit. Let me try again: Thank You. Since the majority of my eats are different (and delicious, obviously), I didn’t think I was doing anybody any favors in this little HLB community of ours, and I was wrong. I would eat crow now, except I’m a vegetarian.

It turns out, my eats have helped some of y’all (more southern phrases poking out; I could go so far south with this joke, and I guess I kinda just did). Your comments literally changed my perception and actually made me a tad bit teary eyed, which isn’t easy to do, aside from random sob fests on the floor, but I was totally hormonal then so it doesn’t count.

It would mean a lot to me though if I actually saw you start eating some egg yolks and a little bit cheese every now and again, unless of course you’re vegan or lactose intolerant. Then I don’t recommend it, especially not if you share a bathroom with other humans. Just sayin’.

In order to express my appreciation, I give you pizza and not just any pizza either. No, I have a Strange But Good pizza, made out of leftovers because that’s how I roll.

Drumroll please….too dramatic. No such thing.

I present to you a little thing I like to call The Mexicali Blues Pizza. 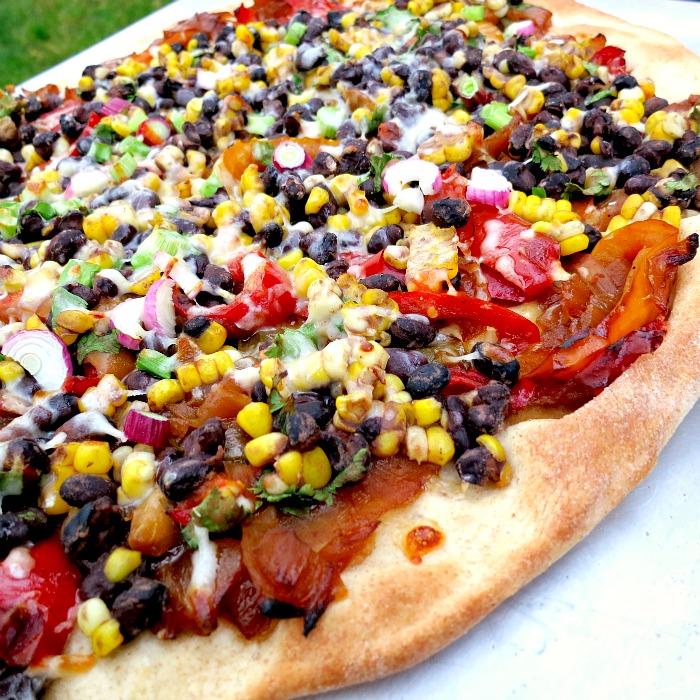 You might not remember (as if), but I threw a Cinco de Mayo themed baby shower a few weeks back. It rocked, and since the party was at my place, I got to keep the leftovers: some Strawberry Tequila Lemonade and a couple ears of corn, to be exact.

Sometimes booze is bad, sometimes it leads to culinary genius, or maybe that’s the just the booze talking. 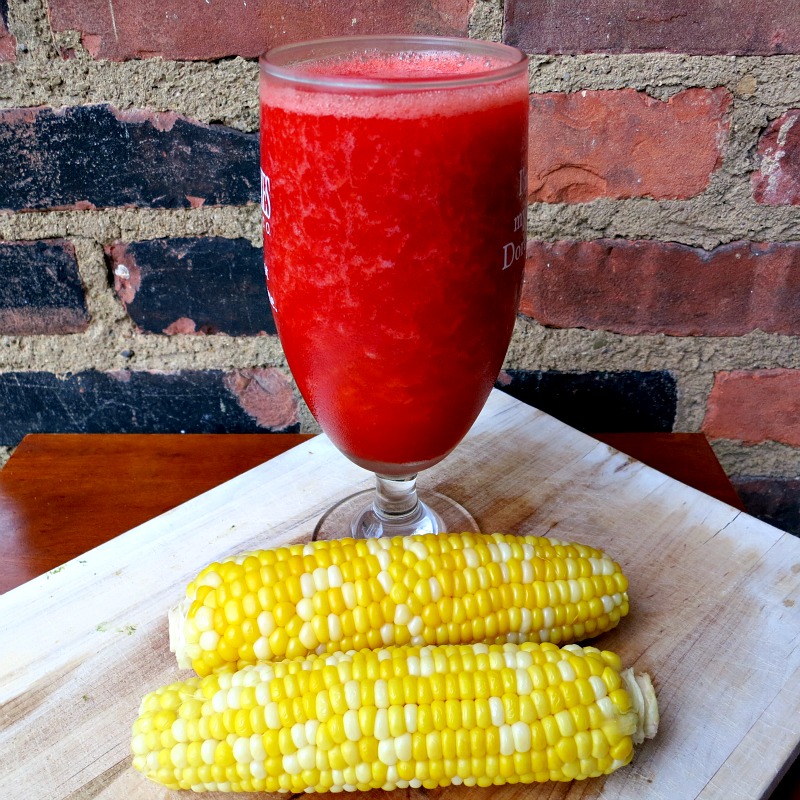 I also had some sautéed onions and peppers and half a bundle of cilantro hanging around, doing whatever it is leftovers do. They probably live it up in my fridge at night. I certainly would.

I cooked the corn, shaved it from the cob, and mixed in up with a can of black beans and fresh cilantro. 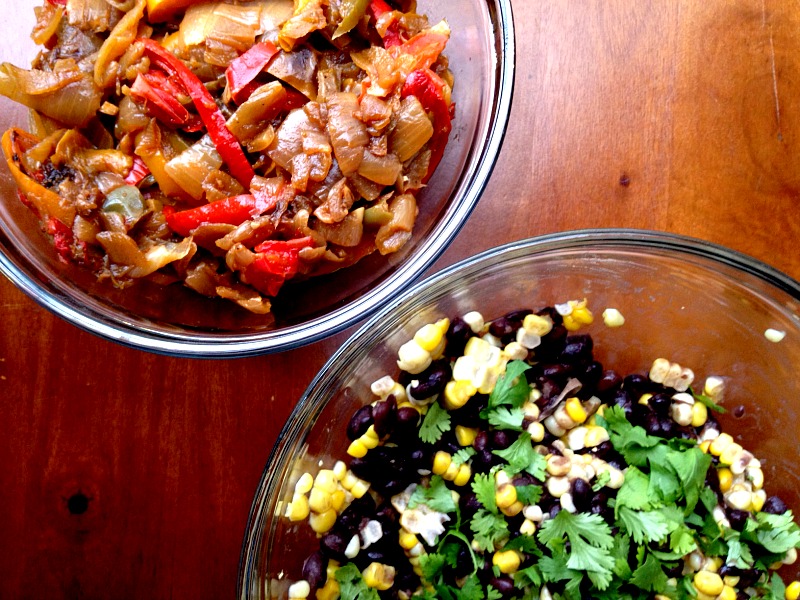 I smothered a pizza crust in the sautéed, practically caramelized, onions and peppers because you can never have enough onions and peppers. Well unless you’re on a first date and then any onion is too much onion. 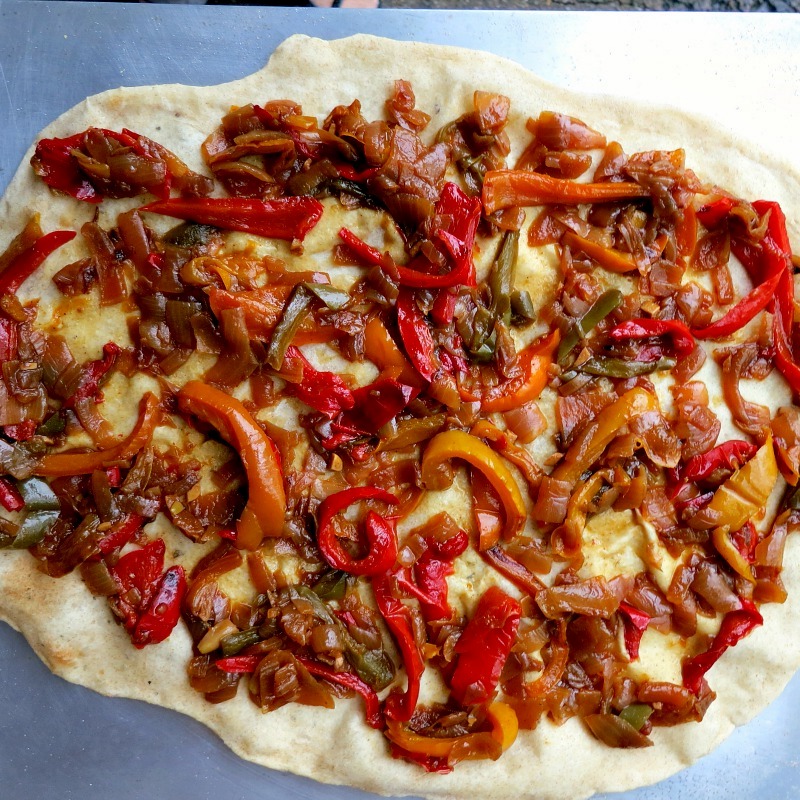 I tossed the black bean and corn mixture on top of the veggies, along with some chopped green onions (never too much onion) and some freshly shredded mozzarella cheese. 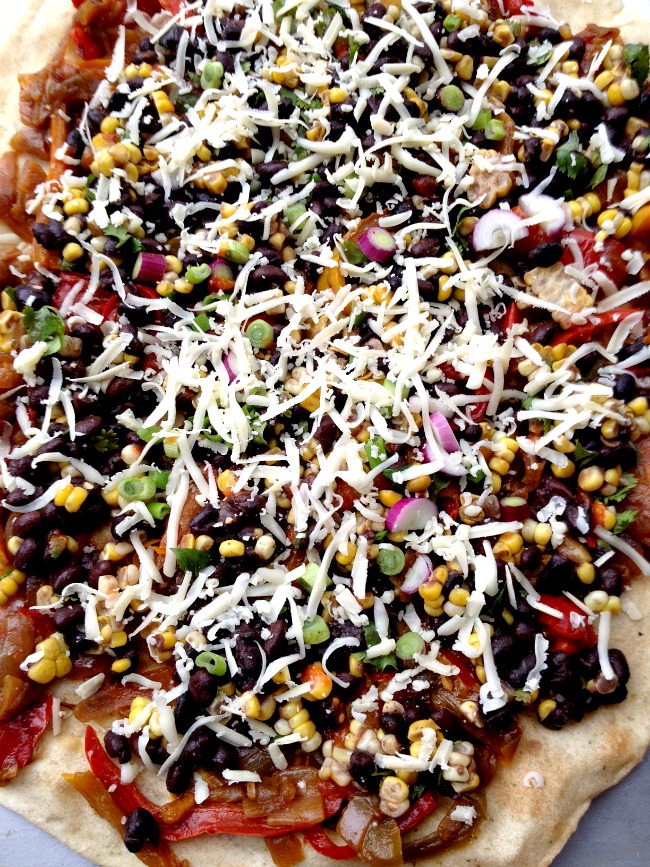 Then I baked the entire thing for fifteen or so minutes before face planting right into it. It was ridiculously good. Honestly, go buy the ingredients and make this. Or maybe wait for your local corn to come in and then make this because that’s about the only way this little gem could get any better. Saucy, salty, sweet, and cilantro-y; this is a flavor explosion in your mouth. Don’t say I didn’t warn you. 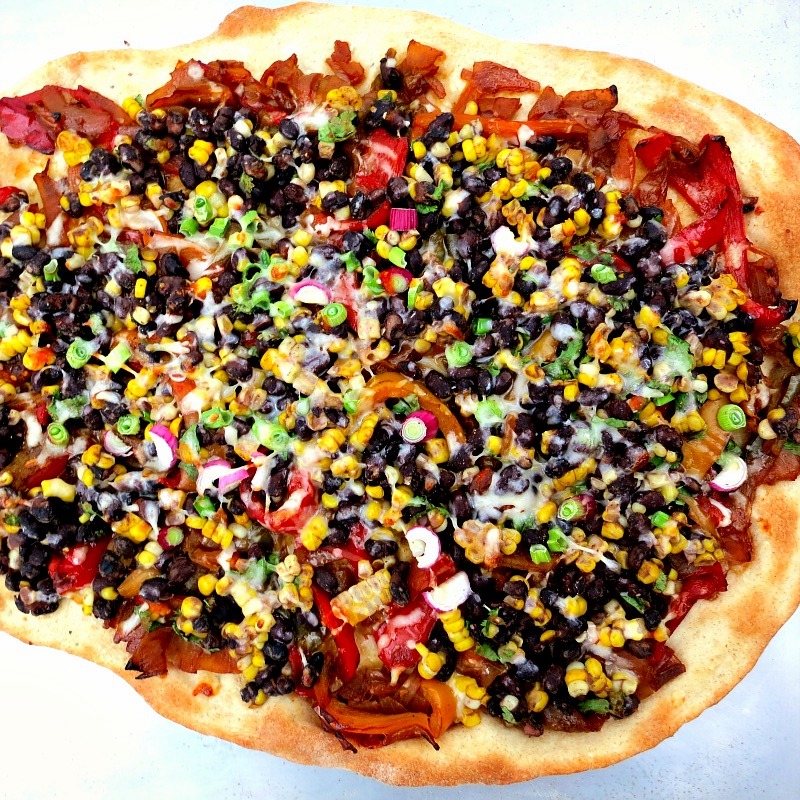 Before you run right out and make this (I can hardly believe you’re still reading right now; Bless Your Heart (I’m getting better at this Southern thing)), head on over to Laura’s blog to see what other Strange But Good contenders are out there. Then come back and create this pizza because it’s just that damn good. You won’t regret it.

*(serves 2 really, really hungry folks or 4 reasonably hungry people: The Hubby and I ate it in two separate sittings).

Side Note: I rarely measure when I cook and this time was no exception (I did mention the Strawberry Tequila, yes) so these are fairly good approximations. At the end of the day, it’s a pizza so you can add as a little or as many toppings as you want.

Do you make homemade pizza often? What are your favorite strange but good pizza toppings?