You are here: Home / Bottoms Up / WIAW: The Dining Solo Edition

Even though my recent love affair with Duck Dynasty continues, I thought I’d pop in today since it feels like forever since I participated in a legit What I Ate Wednesday. It’s probably only been a couple of weeks, but in blog time that eons ago. I’m pretty sure blog years would give cat years a good run for their money, which means I’m no longer a spring chicken, although let’s pretend I’m still wet behind the ears. I like to envision myself as young….for no particular reason (cough, cough).

Special thanks, a quick booty shake, and two over-eager jazz hands go to Mama Peas and Crayons for hosting our fine weekly affair. With over 180 participants last week, I’d say it’s a raging success…now if only we could say the same about my Week In Review link up party. Hint, hint. You should think about getting in on this action now, while it’s still hip and vibrant. You could say you were one of the founding members; imagine how badass that would be. Alright maybe not so much, but think about it anyway m’kay. I’d surely appreciate it.

Enough shameless plugs (and believe me, they are shameless because I’m rather shameless) let’s get to the reason for your little visit today: food.

I’m sharing my Monday eats with all of you and since you told me you rather enjoyed the not staged and more random food photos, I thought I’d throw some of those in here as well. See, I do listen; I even try to give the people what they want. Ask and you shall receive. I think I just went all scriptures on you because my Catholic school antenna popped up. Whatever. Apparently today is going to be one of those day’s my mind races all over the place. Go with it…or focus, yes let’s try that.

First breakfast on Monday was a Banana Strawberry Smoothie with a little OJ tossed in, or really poured in, if you want to get all technical about it, because I needed a liquid agent. Considering the whole thing was a bit on the sour side, I think the OJ might not be at its peak anymore. I drank it anyway, and I’m still here to tell the tale. I also plan on finishing the OJ in future smoothies to come. What can I say; I’m a little reckless and I hate to waste food. 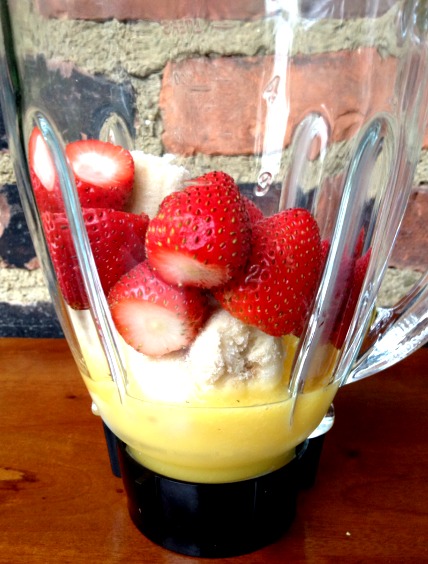 Second breakfast was a healthy serving of Cat’s Apple Honey Oat Cake. This probably needs no explanation, but let’s be real, that’s never stopped me before. The picture on the left is the nice pretty shot I got on Sunday after making said cake, and the picture on the right is how it really went down Monday morning at the office; paper plate included. It’s all fine dining over here. 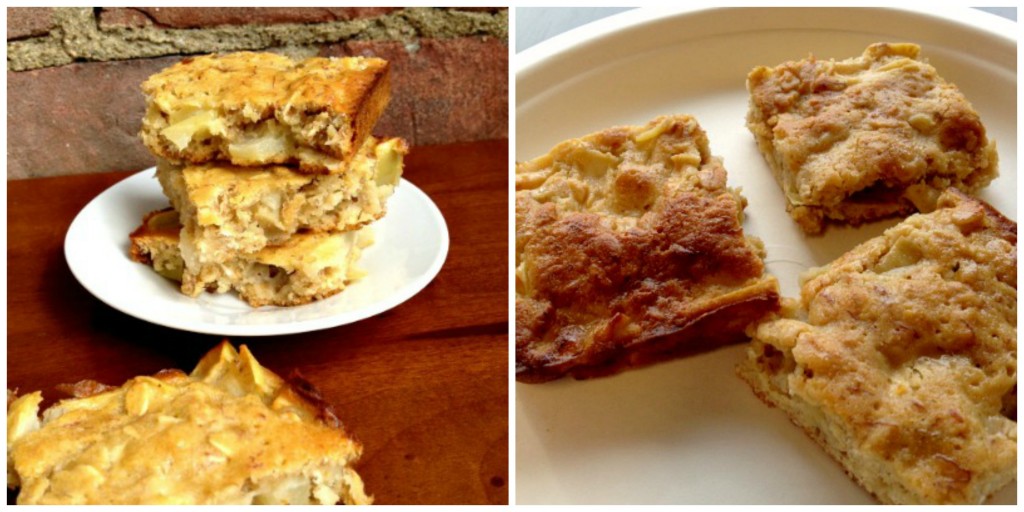 After waiting the required number of hours (to be clear, there are no required hours, I just didn’t know how to transition to my midday meal), I moved onto to lunch, which was also eaten à la office as well.

Lunch was Falafel and Tzatziki sauce, which I scored from my lovely grocery store, Nature’s Bin, over the weekend. And because I really like dipping my food in sauces and spreads, I also scarfed down two stalks of celery and a handful of crackers all smothered in Jenn’s Creamy Cilantro Herb and Veggie Spread. By the way, more crackers were eaten with definitely more spread than shown in the picture below. What can I say; I went back for seconds and maybe even thirds. It was totally worth it. Try this spread, and you’ll understand. 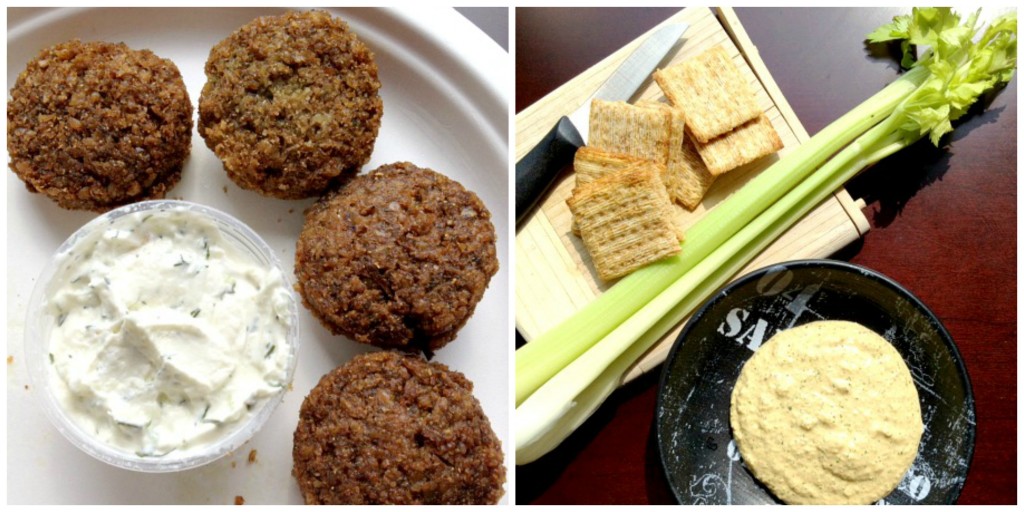 I got home from work a little late on Monday, and quite frankly I didn’t really feel much like cooking. Despite my overall blasé vibe, I thought of my girl Brittany and our pledge to make some pretty fantastic solo meals (#diningsolo – feel free to join our movement) because we’re worth it and pushed forward with my original dinner plan instead.

I had leftover corn from my CSA, coupled with two dozen eggs patiently waiting in the fridge, and a handful of tomatoes on the counter so I knew a Mexican Egg creation was in order. I would have gone all Huevos Rancheros except I had no tortillas, corn or otherwise. As far as the huevos go, I got those in spades.

Full disclosure: this picture is most definitely staged. I’m sorry. I can’t help myself; I like to eat pretty food. An intervention may be in order or we could simply let me eat pretty food. I vote for the latter. 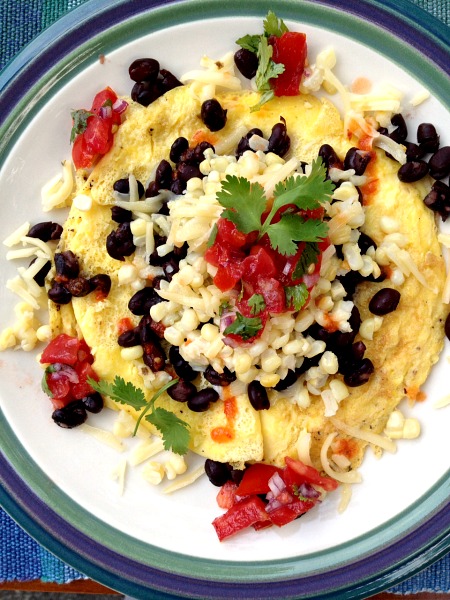 Dinner was a three whole egg omelet without any folding, just straight up pan flippin’, and topped with Monterey Jack cheese, black beans, my CSA corn, a quickly tossed together salsa and fresh cilantro. It was delicious, a whole lot of food and I ate every single bite. #diningsolo for the win.

I’d like to tell you it ended there (not really) and had I been completely stuffed it would have. Shockingly though, I wasn’t feel overtly full so I finished off the last of Sunday’s Strawberry Peach Cobbler, with a spoon and directly from the baking dish. Eh, it happens and to be clear there was only a quarter left. 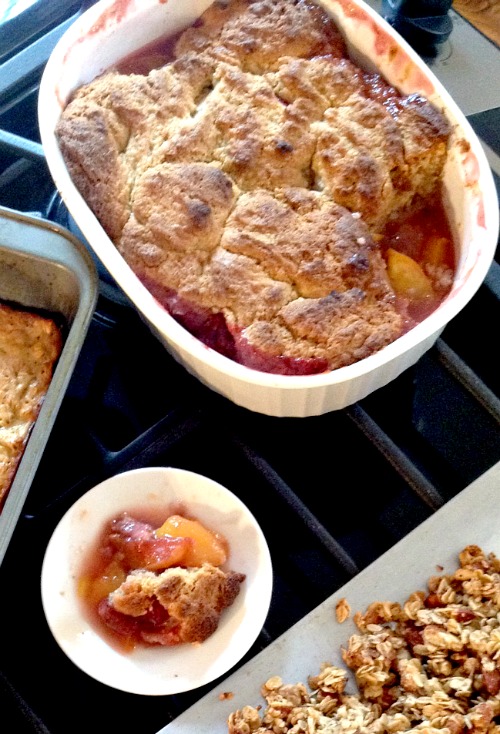 There you have it; an entire day’s worth of eats. I hope it was as good for you as it was for me.

What does a day in the life of your food look like? Have you ever had Mexican Eggs?