It’s only now as I type out the title of this post, I realize I used the wrong raisins. Oops.

Brown raisins, golden raisins….oh well, it probably won’t have much bearing. At least I hope not. 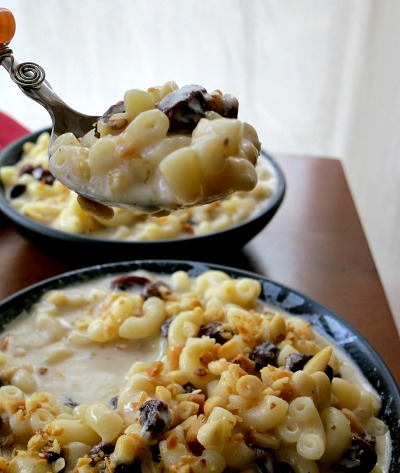 My girl Kirsten of Farm Fresh Feasts notoriety tapped me on the shoulder (not literally, because sadly she lives hours away) about doing a blog post using a fancy pants recipe from a new Macaroni & Cheese cookbook she was given for the sole purpose of recipe recreation and shameless promotion. At least that’s what I’m assuming it’s about because I heard nothing beyond gourmet Mac & Cheese. Obviously, she came to the right place.

Melt: The Art of Macaroni & Cheese by Stephanie Stiavetti and Garrett McCord. 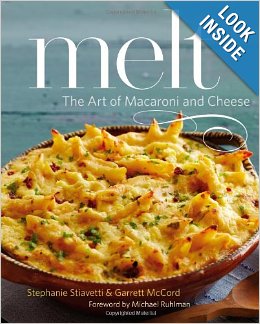 Mac & Cheese is my thing. It’s one of my favorite things in fact, especially this time of year. I adore fresh pasta and will soon take a turn at making my own again, and my love for cheese, well it knows no bounds. At one point in my life, I was fortunate enough to be the lucky recipient of the Cheese of the Month Club, and I got two to three different bricks of joy on the fifteenth of every month. It was the gift that kept on giving.

One time, I got a particular odoriferous blue. I’m talking full on funk-ti-fied, as in every single time you opened the refrigerator door, the entire kitchen was instantly plunged into Funky Town, which is a great song by the way. Normally that’s my kind of town, complete with a little hip shaking and full on duck lips, but not this time, because this cheese was ridiculously overpowering, which thankfully is the exact opposite of what I’m about to share. 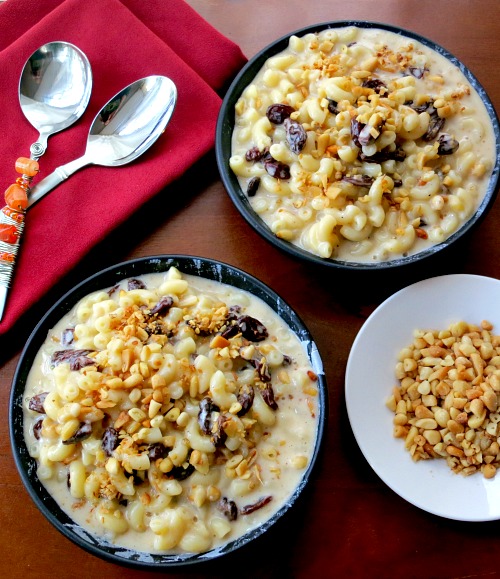 Now I know you gorged yourselves silly yesterday on turkey, potatoes, pies and whatever else you could get your little mitts on. I don’t judge, especially since I was one of you. Alright not really, but only because Thanksgiving isn’t my meal. Come Christmas, you better watch out though.

My point is, as a result of the holiday festivities, you’re probably craving something simple and light, and this pasta absolutely fits the bill. Hear me out because this is not your traditional pasta. In fact, it’s nothing my mama would’ve ever made, although I guarantee she’d love to try it, especially since I get my love of cheese from her. The fruit I attribute to my dad, but the cheese belongs to my mom.

This Mac & Cheese isn’t even baked. It’s essentially pasta blanketed in a light and flavorful Mornay sauce. It’s creamy, without being thick, which might be a result of using the sheep-milk’s Gouda as opposed to the traditional cow. A few bites in, I used the terms delicate and fragile to describe the dish. The Hubby, not wanting to feel left out, chimed in with “sensitive.” Yeah, I’m not sure where he was going with that one. In any event, the raisins add a touch of sweetness and the pine nuts lend a buttery crunch. Quite frankly there’s not much I’d change about this recipe. I might halve the amount of raisins used or perhaps try using the correct kind, but since I’m not a big fan of raisins, unless they happened to be covered in chocolate, it’s no surprise I’d ease up on them.

I give this pasta two thumbs up, and if I had more of those clever digits, they’d be cast skyward as well.

Anyone else looking for a guinea pig for recipe testing? I’m happy to play the part, especially when they involve my two great loves: fruit and cheese. 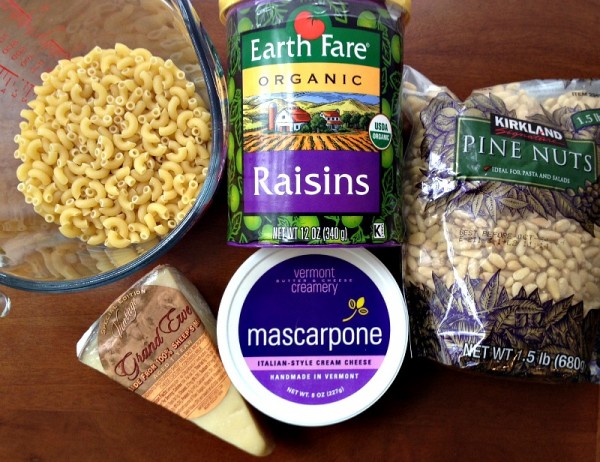 Are you a fan of gourmet Macaroni & Cheese? This first question is really rhetorical. What do you think about pairing raisins with pasta? Have you ever tried a sheep’s milk Gouda? This was my first. 😉