You are here: Home / Bottoms Up / WIAW: The Weekday Edition

I have full on conversations with myself all the time.

Or maybe they’re monologues. Does it count as a monologue if there’s an actual give and take, even though it’s all from the same person? Now there’s a question for Shakespeare. Too bad he’s unavailable for comment, although I suppose I could just make it up. It’s what happens in my head more often than not.

In addition to monologues, I have snippets of ideas pop up in my brain and stay lodged there until I take action. For example, I knew months ago, I needed to share my workday eats for my next What I Ate Wednesday, partially because they’re usually less indulgent and more structured than my footloose and fancy free weekend meals, which leads me to the other reason I wanted to share. My weekday meals represent how I eat the majority of the time; roughly five out of seven days if you want to get all technical about it. It’s good to know my math skills are still going strong. Monologues: check. Math skills: check. Clearly, I am on top of my mental health.

Basically, if you want a true taste of Meghan, even though I’m truly reserved for the Hubby, workday eats is where it’s at, which is why I’m bringing my Monday meals to the table.

Let’s begin… with coffee, which is where every day starts for me. I add a touch of raw sugar and almond milk to my morning mug. 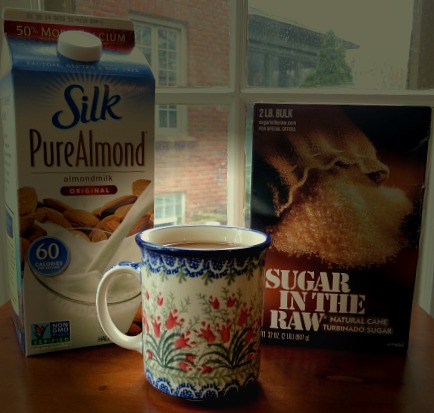 After coffee comes breakfast, which was a smoothie packed with kale ice cubes, frozen pineapple chunks, a banana, some strawberries and a touch of orange juice to make the medicine go down. Alright there was no medicine, but you get the idea. Since I was out of granola, my staple second breakfast, I paired my smoothie with two slices of Tomato Basil Bread, toasted and topped with butter. Sometimes it’s good to switch up second breakfast. 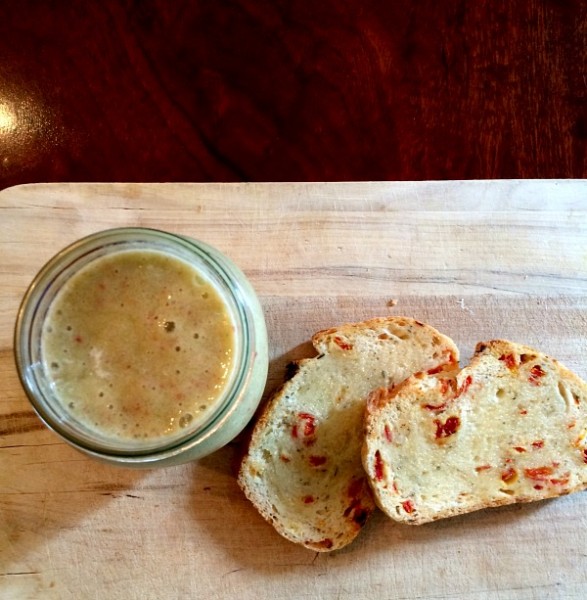 After breakfast, I hit up the office for a few hours and then went to the gym for a lunch time Body Pump class. I might have a thing for bright colors. Clothes, produce, it doesn’t matter. 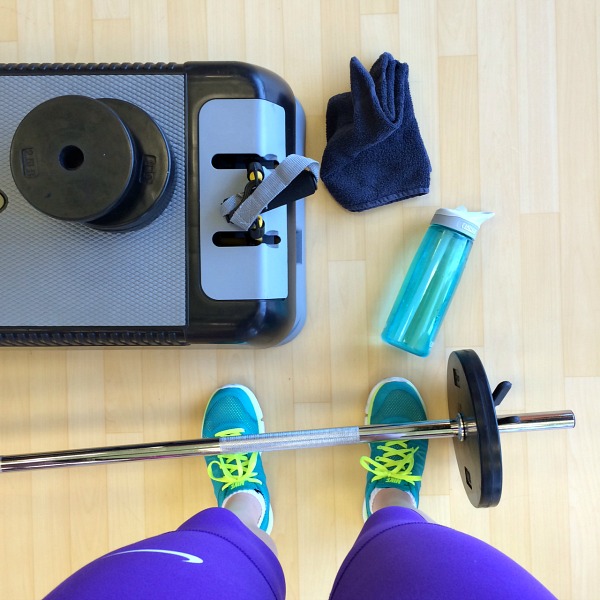 Not shockingly, I was starving afterwards. I quickly inhaled two of Arman’s No Bake Caramel Pecan Bars and a bowl of cherries, which netted about twice the amount pictured. Arman’s calls these bars healthy; I call them delicious. 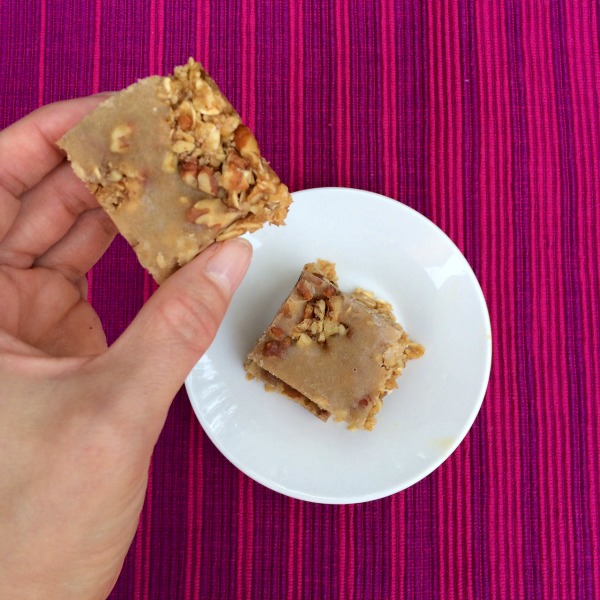 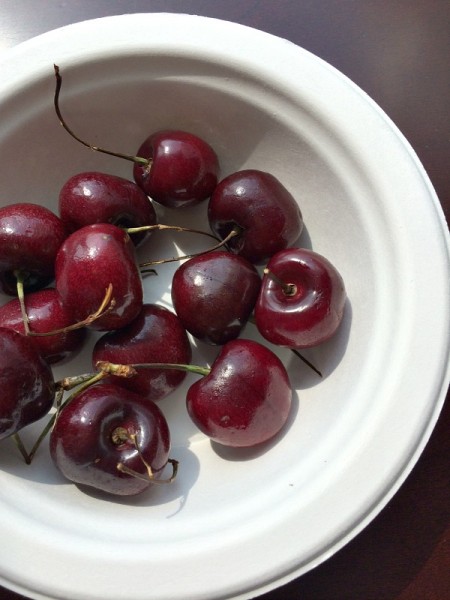 Lunch came an hour or two later, when I was again ravenous. It was a giant green salad with lots of toppings: cheddar cheese, cherry tomatoes, toasted walnuts, bell peppers, carrots and a hard-boiled egg. The giant cucumber hanging out in the background was just for show. Truly, I had planned on eating him with a side of hummus, but time got away from me, which happens a lot at the office, and he remained untapped…until Tuesday, that is. 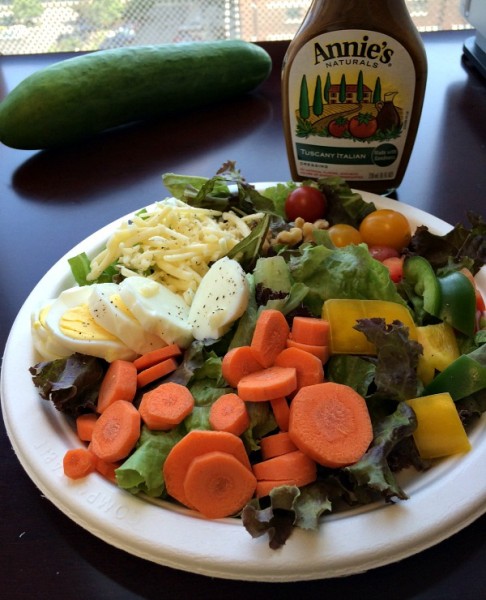 Dinner happened some hours later at home. It was a bowl of my Vegan Three Bean Chili, which I bastardized by tossing some cheese on top. Underneath the chili is a lovely mountain of brown rice, and on the side is my daily vitamins, which I normally eat right out of the bottle, although I decided to plate them today for you. I take two One A Days, which defeats the purpose of a one a day, I know. I also regularly ingest two D’s (um, I live in Ohio, where we only get sun one-third of the year), one C (to prevent the sickness, and I mean any sickness) and lately a calcium supplement because the lovely folks over at Adora sent me some samples, and who am I to turn down chocolate…er I mean vitamins. 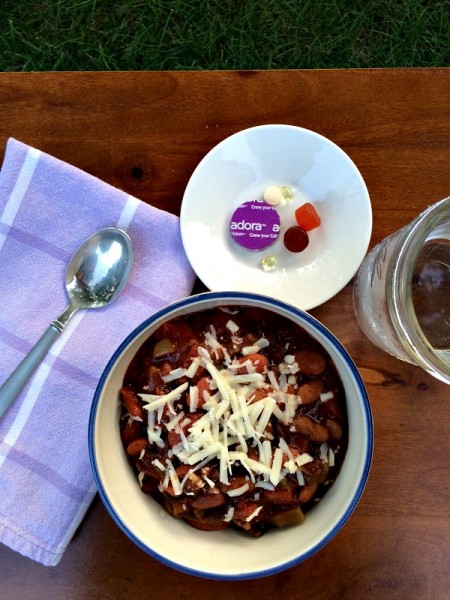 In between all my meals, I drank copious amounts of H2O because hydration rocks. It also makes you go to the bathroom a bazillion times a day, but you can’t win ’em all.

What do your weekday eats look like? How do they differ from your weekend meals? What’s your go to snack lately?