You are here: Home / Good Eats / One Potato, Two Potato

I have an affinity for potatoes. A love really. I am Irish, so it’s practically in my veins and would explain why I have an entire Pinterest board dedicated to these beauties. Confession, I just created this board a week ago, but only because, when I was restructuring my food boards (satisfied sigh for organization), I realized I had pinned a ridiculous amount of potato recipes. It only made sense to give them their own home. Home is where the potato is, or heart, or something sentimental.

Here’s just one of the recipes I pinned and then actually got around to cooking for Parmesan Sweet Potatoes. This recipes hails from the kitchen of teeniecakes and can be found here: http://www.teeniecakes.com/2010/12/roasted-parmesan-sweet-potatoes/.

Let me start by saying, I’m a big fan of savory sweet potatoes and happen to think they are just as much fun as sweet ones. It’s not always about rainbows and puppies, although I’m a fan of those too. Plus this recipe couldn’t be any simpler and barely needs instructions, but I took a crapton (still not a word, still rolling with it anyway) of pictures, so I think step by step photo directions are in order.

If you read me at all (eek, that sounds awkward), you know I’ve been getting sweet potatoes in my weekly CSA share. I’ve got an abundance, and I don’t want to waste them. I hate wasting food, and I certainly don’t like letting my CSA win; I’m a wee bit competitive. I noticed a couple of my oh so sweet potatoes were starting to get a little soft (never a good sign, and I do mean never), so the clock was ticking. Nothing like some pressure to get the job done. Like sands through the hour-glass, so are the spuds of our life….let’s get cooking.

Step One: rinse and peel your sweet potatoes (about two big ones or three medium-sized). Get yourself a high quality veggie peeler and this step will take mere seconds…per potato, of course. The more potatoes, the more seconds it takes; its simple math, which just happens to be my favorite kind.

Also, I’m sure you’re wondering why bother rinsing these little gems when you’re just going to peel them anyway. The answer is because they’re dirty little suckers and if you don’t wash them, that shit gets on your hands and then eventually on your freshly peeled potato. Just be clean people. Kitchen hygiene is important. 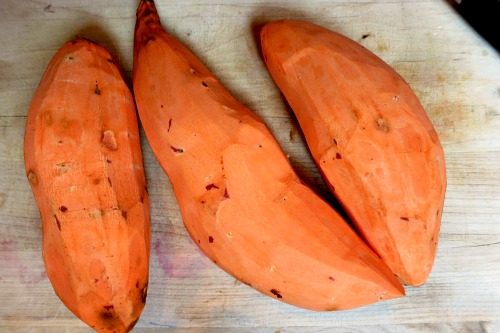 Step Two: dice your potatoes into bigish chunks (as seen below) and then toss them into a mixing bowl. They don’t have to be perfect (it’s unattainable anyway), but try to keep them the same size so they’ll cook evenly. You don’t want one small mushy potato and another one in the same batch hard enough to break your tooth. That’s bad. Really bad.

Step Three: Add olive oil, garlic, Parmesan cheese, thyme, salt and pepper. Take your potatoes outside, snap a quick picture and then mix it all together. Feel free to skip the outdoor picture part, but bear in mind, you’ll lose some of that outdoor air flavor. It adds a little “je ne sais quoi” to my meals. 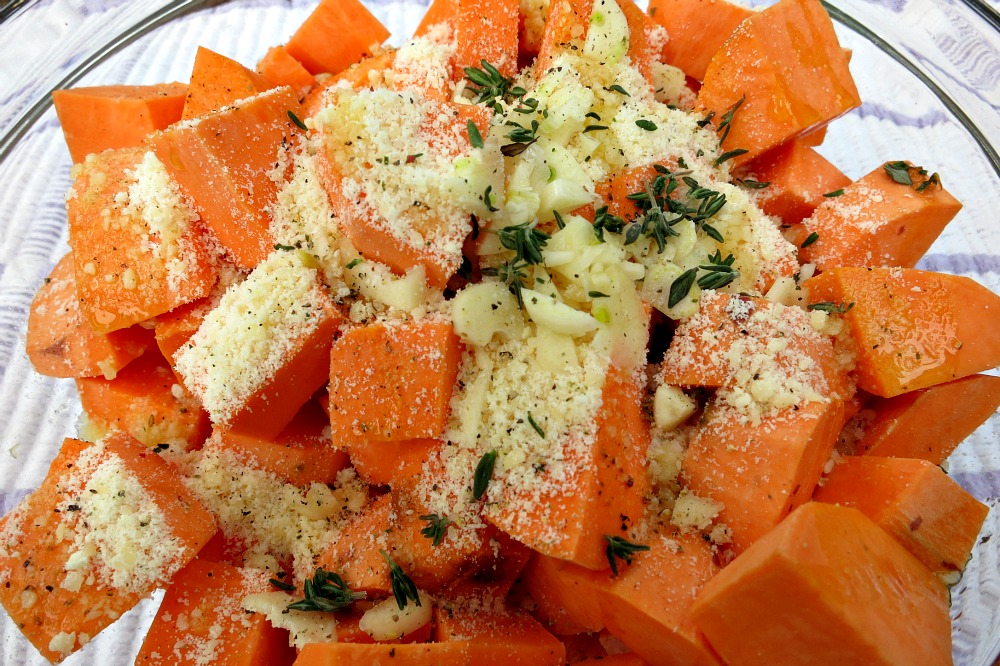 Step Four: Spread your well mixed potatoes into a single layer on a cookie sheet lined with foil. Again haul them outside for their moment in the spotlight and some more fresh air smokiness. When people eat them and say, “Man, these taste like fall,” you’ll know you’ve succeeded. 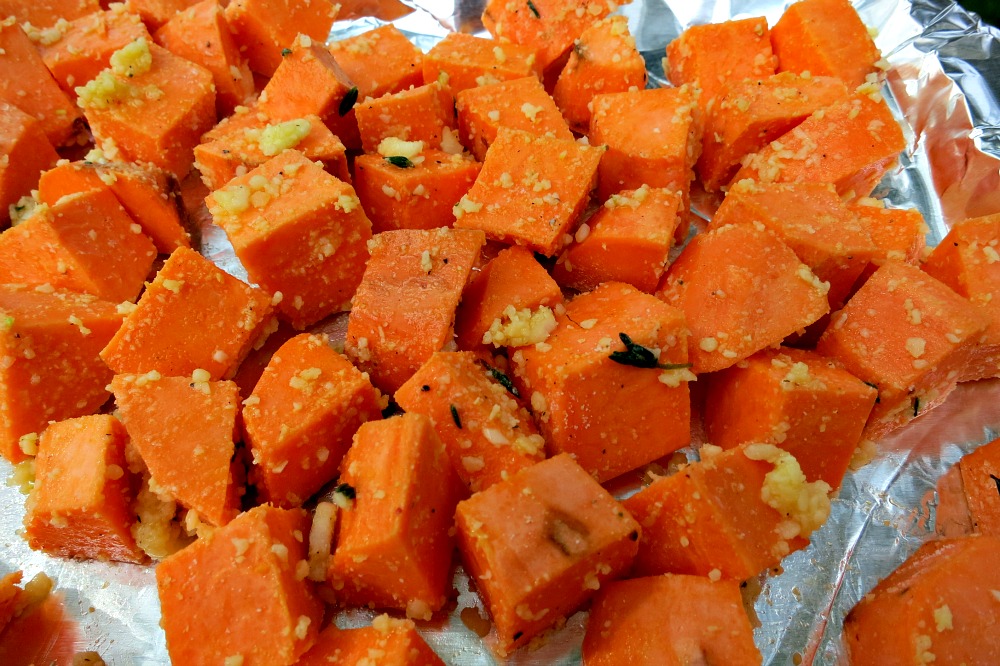 Step Five: Pop them into a 400 degree oven for thirty to forty minutes. I went with a mere thirty minutes. The recipe recommends cooking them for another 8 to 10 minutes on the broil setting, but I skipped this part because when I checked my spuds at the thirty minute mark, they were done. Stick a fork in them (literally) done. 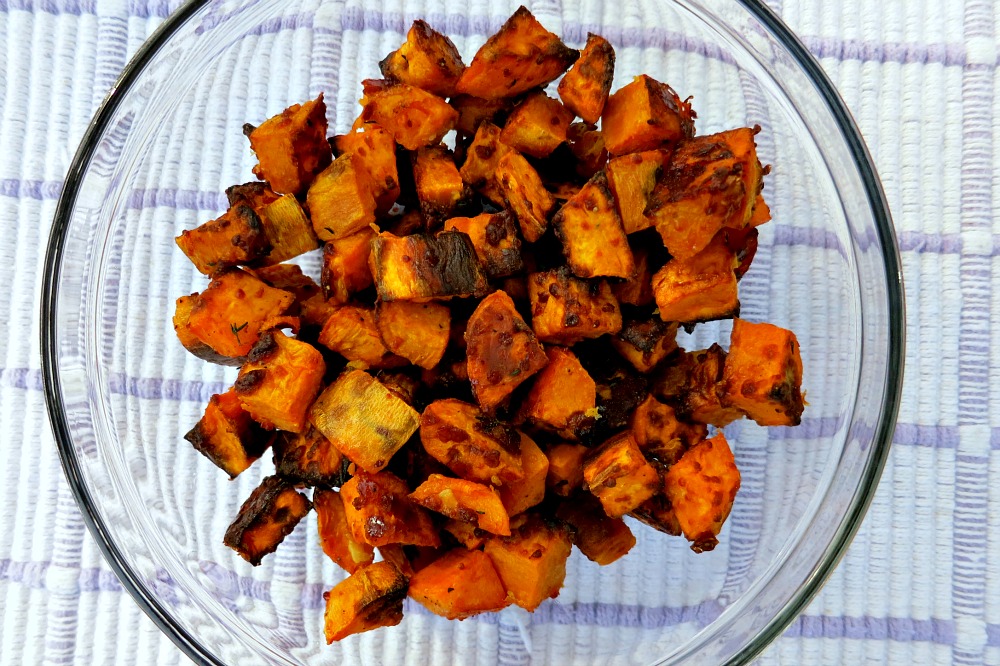 Once literally done, remove potatoes from the oven and enjoy. This is also the part where I lost my way…yet again, because other than popping one in my mouth, I never did get to eat them, much less enjoy them.

I know it’s a travesty. I brought them to a party, but left before dinner and my potatoes were ever served, so I can’t really describe their amazingness (another non-word), but I do think you should make these and then report back. I’m so pushy. I’m sorry; I can’t help myself. Would it help if I said, “pretty please?”

Pretty please with an organic, locally sourced, and naturally ripened in the sun, cherry on top. 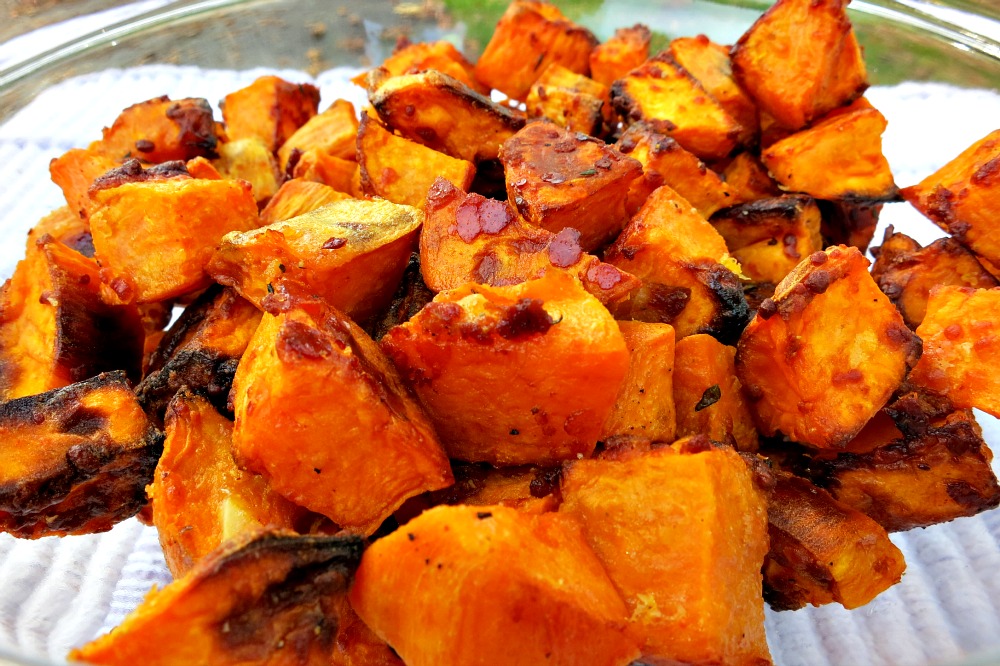 Look at how pretty they are. They have to be good right?! I need to know. The suspense is killing me.

Looking for Parmesan Roasted Red Potatoes? Then I recommend this recipe. It contains the trifecta of potatoes, garlic and cheese, and turns out fantastic every time. 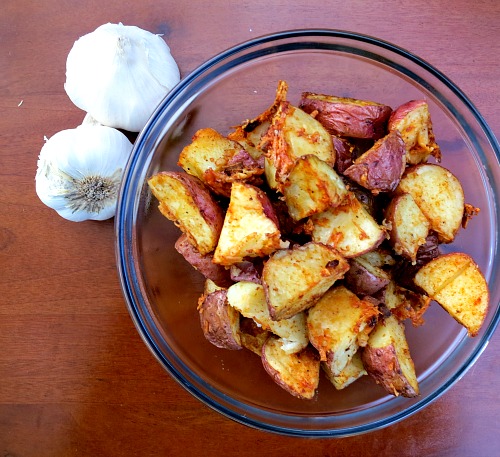 Do you heart potatoes too? How could you not? What’s you favorite potato dish?