You are here: Home / Bottoms Up / Dirty, Dirty CSA

“Hello there,” she says suggestively.  “C’mon in. Don’t by shy,” because we’re about to do another link up party, and this one’s all about my CSA. As much as I’d love to dive head first into all the food (literally), let’s meet our hosts. We have two fabulous ladies who couldn’t be more different in their writing styles and sassy speak, but when it comes to the food, these gals can agree: local produce is where it’s at. Say hello to:

Heather at In Her Chucks 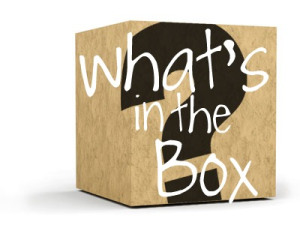 Let me introduce you to week five of my Winter CSA. Say hello to my little friends.

I’m going be honest, I took these pictures last Thursday night, a little after 8 p.m., because that’s when I finally dragged my sorry ass home from work, which was pretty typical of every night last week. The lighting was bad, my camera took a dive (yes, exactly that same night), and I was told washing your produce ahead of time, even for their photo op, can be detrimental to their longevity. As much as I’d like to dismiss Kirsten’s advice (not to be confused with Kristy), I lost a baby Acorn squash a few weeks ago, so there might be something to it. That being said, my produce is, in the words of Christina Aguilar, “Dirrty.” 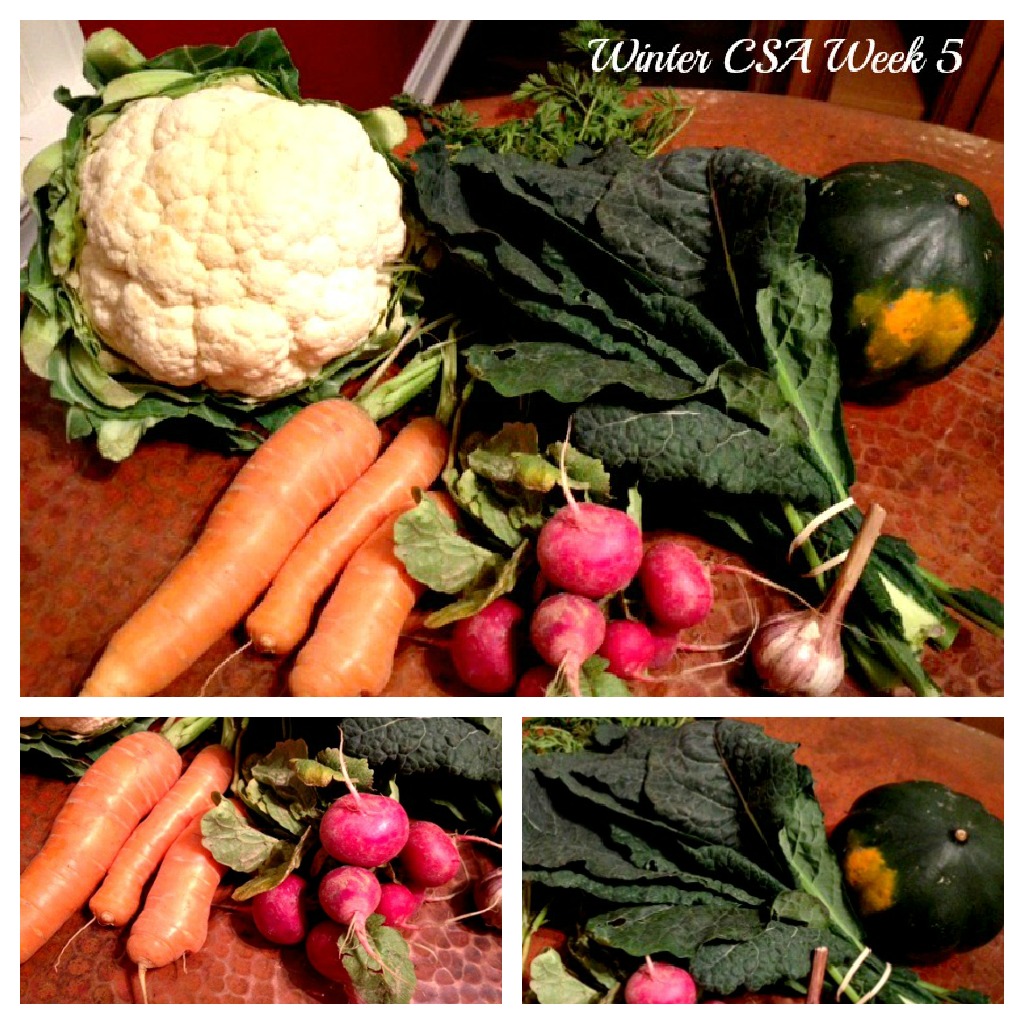 If you ain’t dirrty

By the way, this is a great song for a spinning class. I know because I’ve been filling in for the actual teacher the past couple of weeks. My god, what an adrenaline rush. Ya know what else is a crazy adrenaline rush? CSA veggies. Look how dirrty, abnormal and funktified they are; I love it.

In this week, my half-share included an Acorn Squash, a perfectly coiffed cauliflower, a half bunch of kale, some carrots, a bundle of radishes and another bulb of garlic. I’m still rolling in the garlic over here, but that’s all good with me. It takes forever to expire, and I’m getting ready to roast and freeze a batch so I say, “Bring on the garlic; it’s about to get dirrty up in here.”

I’ve revealed my naughty goods, but I bet you’re expecting to see what I’ve done with it. I certainly wouldn’t want to disappoint so onto the nitty-gritty.

This should come as no surprise to my regulars, but I’ve been drinking my greens. The Kale has made a lovely addition to my morning smoothies, and it’s safe to say I’m hooked, although my Da says, “I can’t believe you drink that stuff.” Da, in case you were wondering, is my lovely father who goes by just Da now because he is too cool for the last “d.” Before that, he went by Babydoll or sometimes just P. You see, my Da is like Diddy and changes his name every few years. Try to keep up, will ya?

I like to slurp my smoothies from old mason jars because it’s a cool vessel, but mainly because it says “Ball” on the outside of the jar. It makes me giggle every time I take a sip because I’m very mature (snort) and not shockingly, I couldn’t sit through a high school health class with a straight face. What can I say? I grew up with brothers, and I still have the mentality of a teenage boy; sex jokes and potty humor are my thing. They both make me laugh, and with all the hours I’ve been working lately, I sure could use a good laugh, so let me drink my ball (just one for me and Lance) in peace.

I threw my cauliflower into a bowl of “delicious ugly,” and I am officially coining this phrase. Feel free to use it, but send all proceeds to my attention. Some food bloggers create recipes; me I go for dirty words. Also in this bowl of “delicious ugly,” because it really is hard to tell, is some whole grain pasta, a rich and creamy cheese sauce, and fresh chives, which are still hanging on, in my outdoor herb garden. 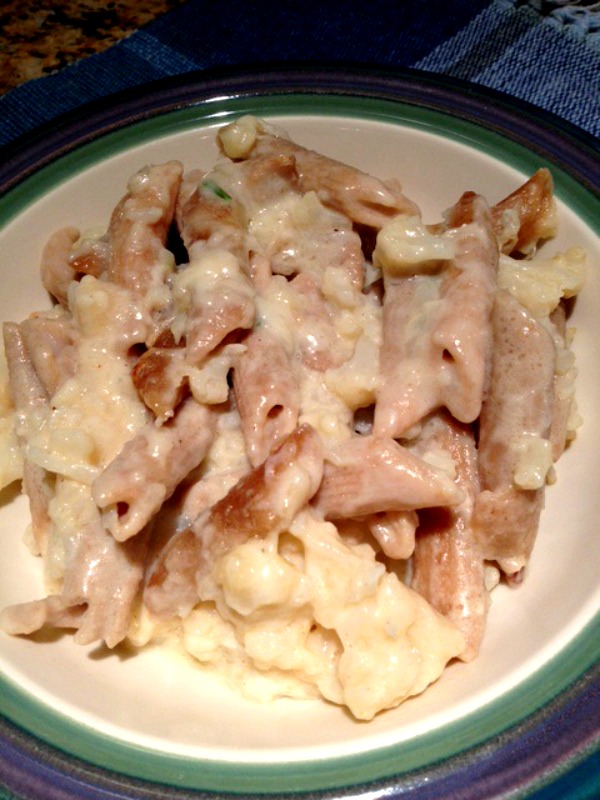 Moving on to some pretty pasta, my garlic (part of it, anyway) got tossed into some heated olive oil, cooked for a minute and then drizzled over whole wheat spaghetti, Kalmata olives, fresh parsley (again from my herb garden), feta and tomatoes. I could, and pretty much do, eat this every week. In fact, this picture is from “one of those other times,” she says while waving hand flippantly in the air. It gets around. 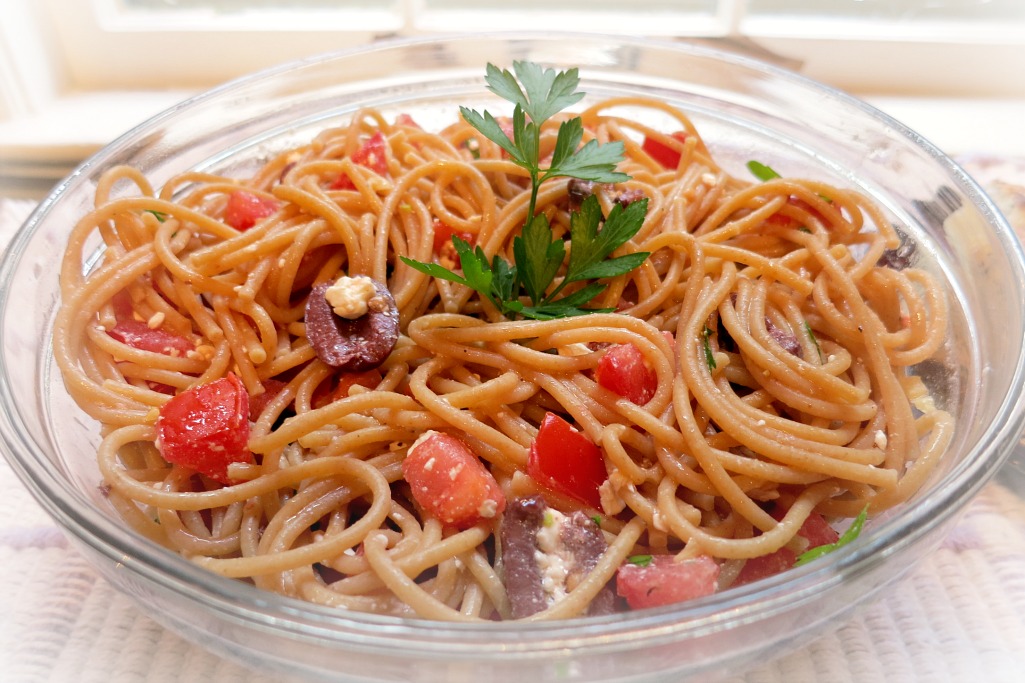 The carrots and radishes have been an integral part of the Hubby’s lunch time wraps, along with some bell peppers, cucumbers, feta, hummus, onions and spinach (alpha order makes me glow). 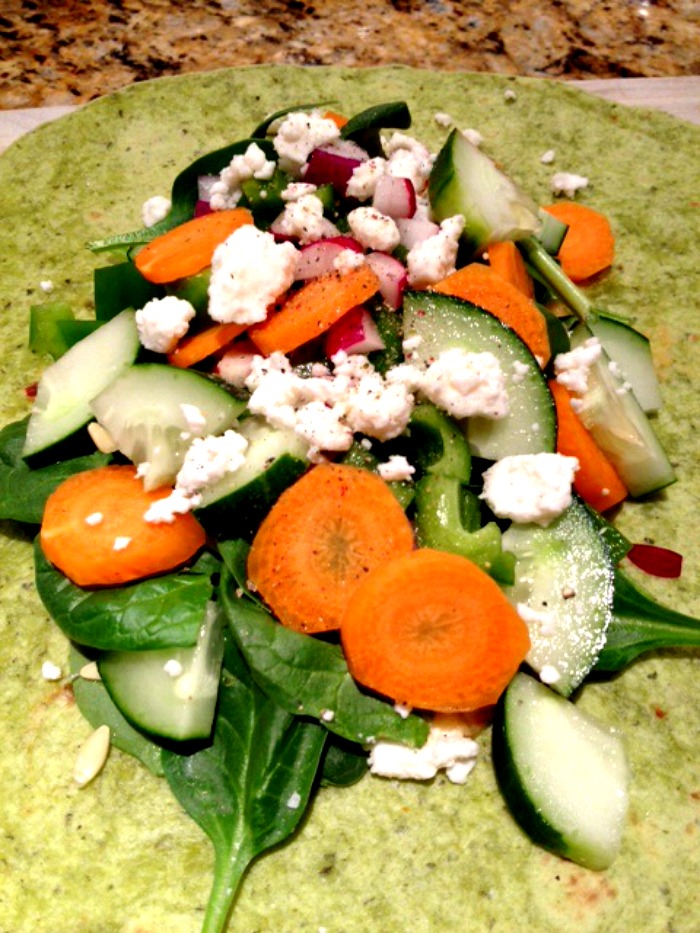 Since I don’t think I’ve talked about balls enough already, let’s move onto my Huevos. I hope you realize whenever I say Huevos I do so with a heavy Spanish accent and really enunciate the oooossss. I also picture myself with a thick pornstache and a stogie. I’m not sure why, it might be because November was Mustache Month or all the Sons of Anarchy I’ve been watching lately, but whatever the reason, it’s Huevooooooossss time. A corn tortilla, some scrambled eggs (yolks and all) topped with black beans, sautéed onions and peppers, cheddar cheese and radishes. It was lick my lips and pornstache good. 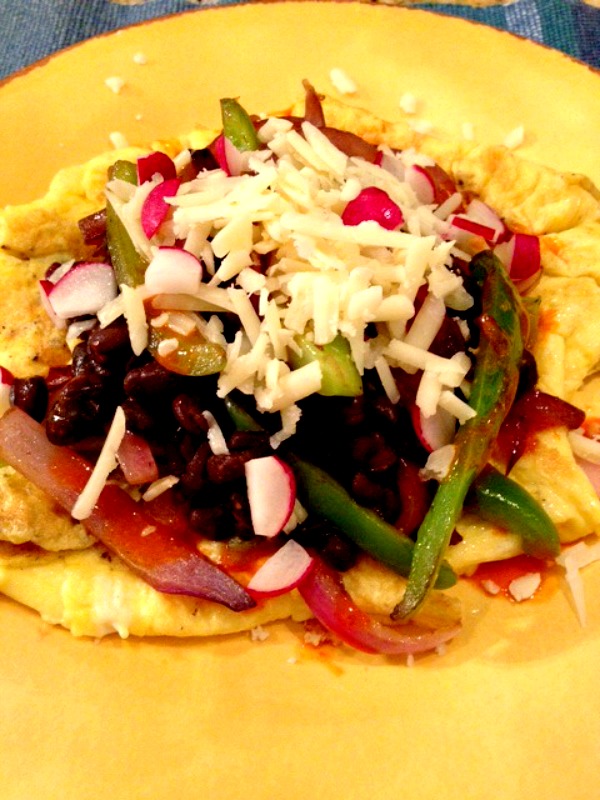 In honor of CSA weeks gone by, and since I knew last night was going to be another late one at the office, for dinner I defrosted the last of my Apple Butternut Squash soup and devoured a nice warm bowl alongside some baked Sweet Potato Fries. It was the perfect comfort food after a long day. 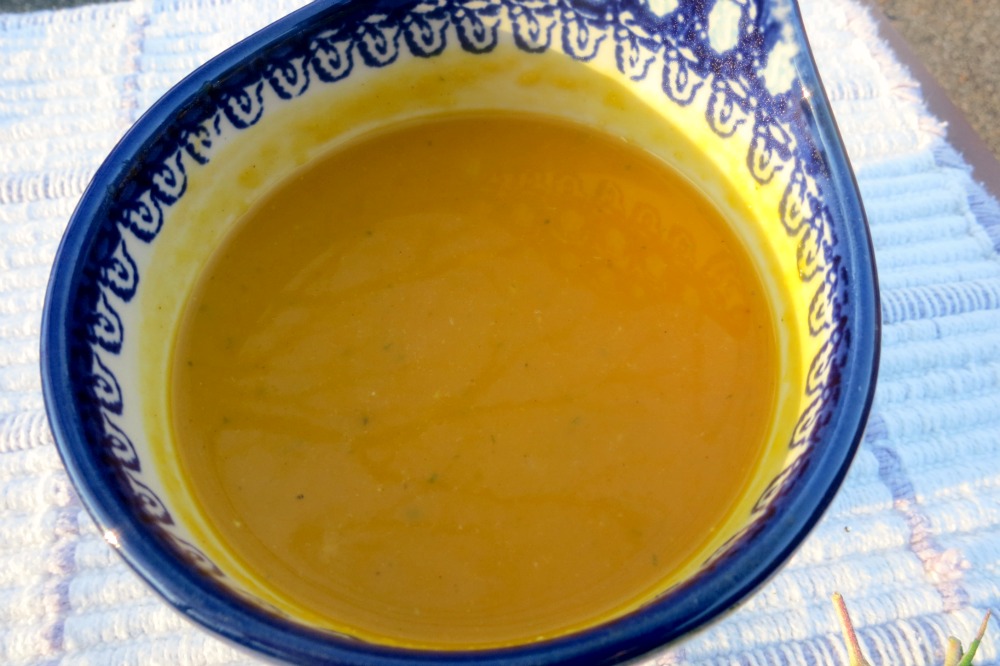 All in all, I think I did a damn fine job (two snaps and an exploding glitter ball) of working through my recent batch of CSA goodies and even delving into the ghost of weeks past. The only thing I haven’t touched is my baby Acorn Squash, and have no fears; I don’t plan on losing another one.

What have you been doing with your CSA goodies? Can you talk about balls with a straight face (I’d be super impressed)? Do you sometimes find yourself speaking with an accent, or is it just me?