You are here: Home / Good Eats / What I Ate Wednesday: The CSA Edition

It’s been at least three weeks since I shared my last produce pickup, and I would call myself a bad blogger, but been there, done that. That’s so last week. Pshhh.

I could proclaim I feel bad about being selfish with my veggies, but I don’t and proclaiming is for the birds or at the very least a certain band who would walk five hundred miles, which is just ridiculous unless you’re Forrest Gump; then it’s totally believable.

Truth be told, I feel way worse over side skirting the regulations for Jenn’s What I Ate Wednesday link up party. Sorry Hostess with the Mostess; forgive me for I have sinned or broken the rules, which is kind of the same thing in my mind. I promise to make it up to you with mass amounts of veggies and a side of blueberries because I know you have a thing for blueberries. You and Veruca Salt; not that there’s any connection there. Far be it from me to imply such things, certainly not when a certain someone is eight months along.

Since I promised Jenn, and I owe you a mess of veggies, let’s begin, and let’s do it in weird mood lighting because that’s how my pictures came out. I could tell you I was aiming for an ethereal quality, which wouldn’t be so odd since I do tend to put my produce on a pedestal, but it was really just overcast. Does it help to know I had to stand on a chair to get this shot? No…oh well, I tried. 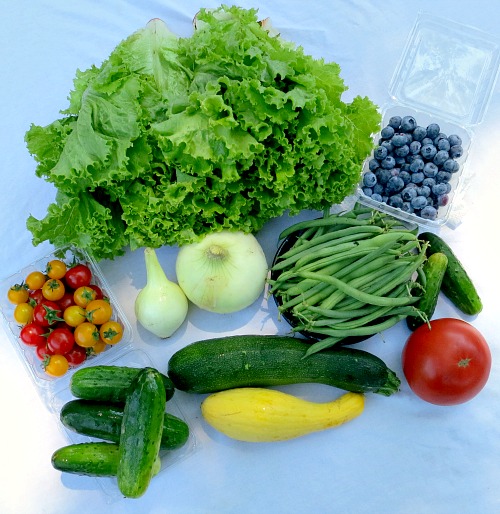 This particular week in CSA land, which is right next door to fields of frolicking bunnies and prancing unicorns (it’s sort of like having Mr. Rogers for a neighbor, but less creepy; can someone get this guy a new sweater?), we took home a bevy of beautiful and bountiful produce. Specifically, a boatload of green leaf lettuce (nothing new there), blueberries, cherry tomatoes, bunching onions, green beans (and so it begins), pickling cucumbers, zucchini, squash and a wonderfully juicy tomato. I remember this tomato like it was yesterday. So fresh and so clean, clean.

Speaking of Clean Eats, in typical fashion, I’m going to break down where all my delights and delectables went because that’s where the real fun is; move over Mr. Rogers, we’re headed to Funky Town.

My blueberries, along with a banana, made their way into bowls of cereal. I’m still digging the Mom’s Best brand for their almost sketch free ingredient list; now if only they would rid them of GMO’s. At least they’re honest about it, which is more than I can say for most companies. 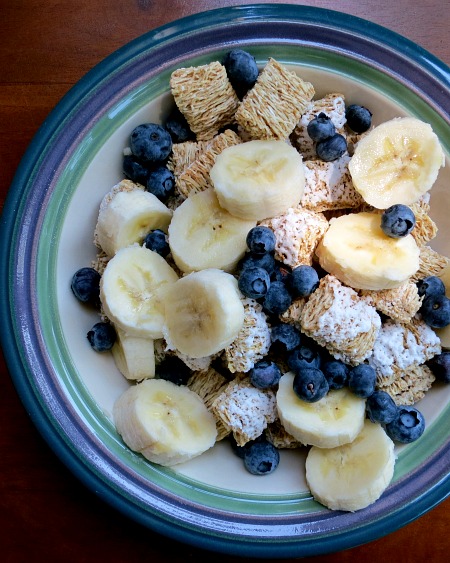 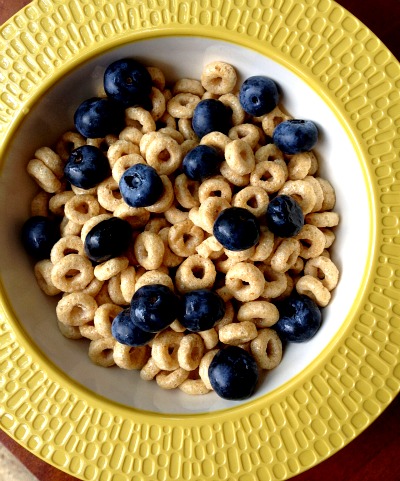 My blueberries also took part in some salad action along with crumbles of blue cheese and balsamic dressing. Swoon. That wasn’t my only salad though. When you get bundles of lettuce bigger than your own head, you eat a lot of greens for lunch. You also stop taking pictures of most of them because you might be getting a tad tired of lettuce. Shhh; it’s a secret. 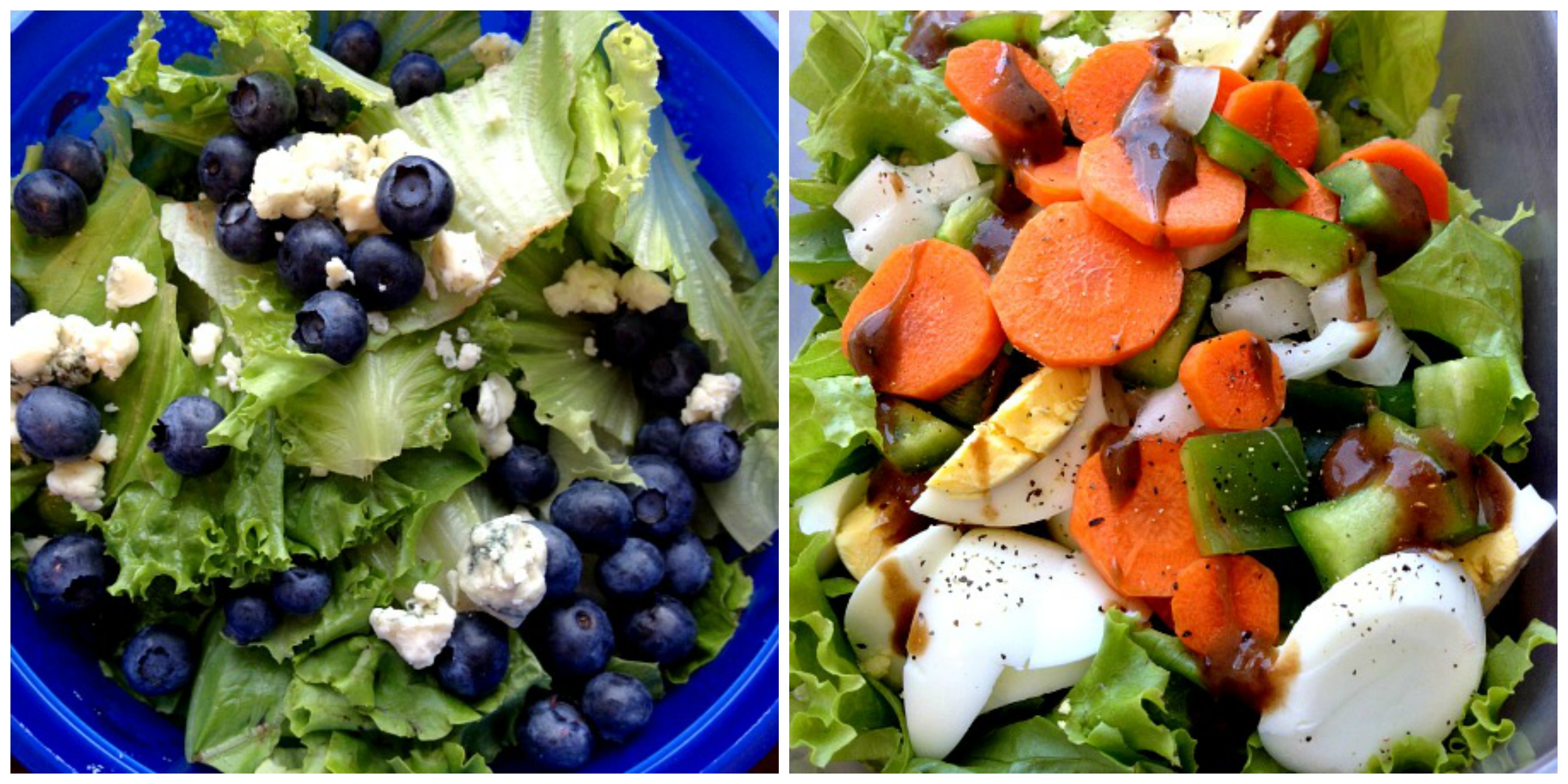 Moving on, I tossed the pickling cucumbers into empty, and thoroughly cleaned out, peanut butter jars. I waved my magic wand, tossed in a clove or two of garlic, some dill and called it Pickles. Full disclosure: I love pickles. I love the ones you get with a sandwich when you go out to eat, and I will gladly eat your pickle should you willingly neglect it. I also love the ones you buy in great big hulking jars at the grocery store, but I don’t know if I love the ones I made.

Here’s the thing: these particular pickles are sitting in my fridge as I type this, because I’m a little bit scared to try them. I know, I know; I can do a Tough Mudder, but I’m scared to eat my own pickles. I guess I have some kind of deep rooted pickle trust thing. Make what you want with that and remember I never claimed to be sane, which is something else that’s for the birds. 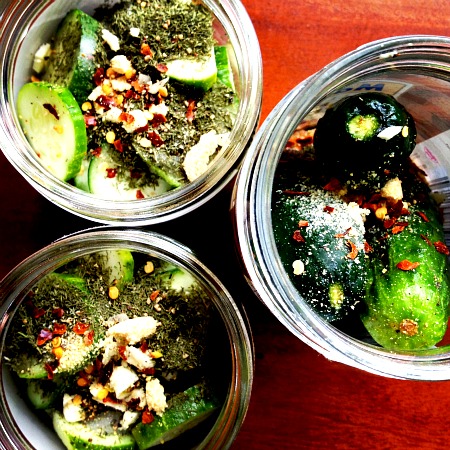 Enough about pickles, let’s talk about some ripe and juicy tomatoes instead. Who knew veggies could be so naughty? Don’t even get me started on the zucchini, but since I mentioned it…..some of my baby tomatoes coupled with one large zucchini and all got together on a boat; that is a zucchini boat. These things have been on my bucket list (i.e. my Pinterest board) since last summer, and I finally got around to making them. They’re pretty good, and even the Hubby, who only likes his zucchini in bread, was a fan. 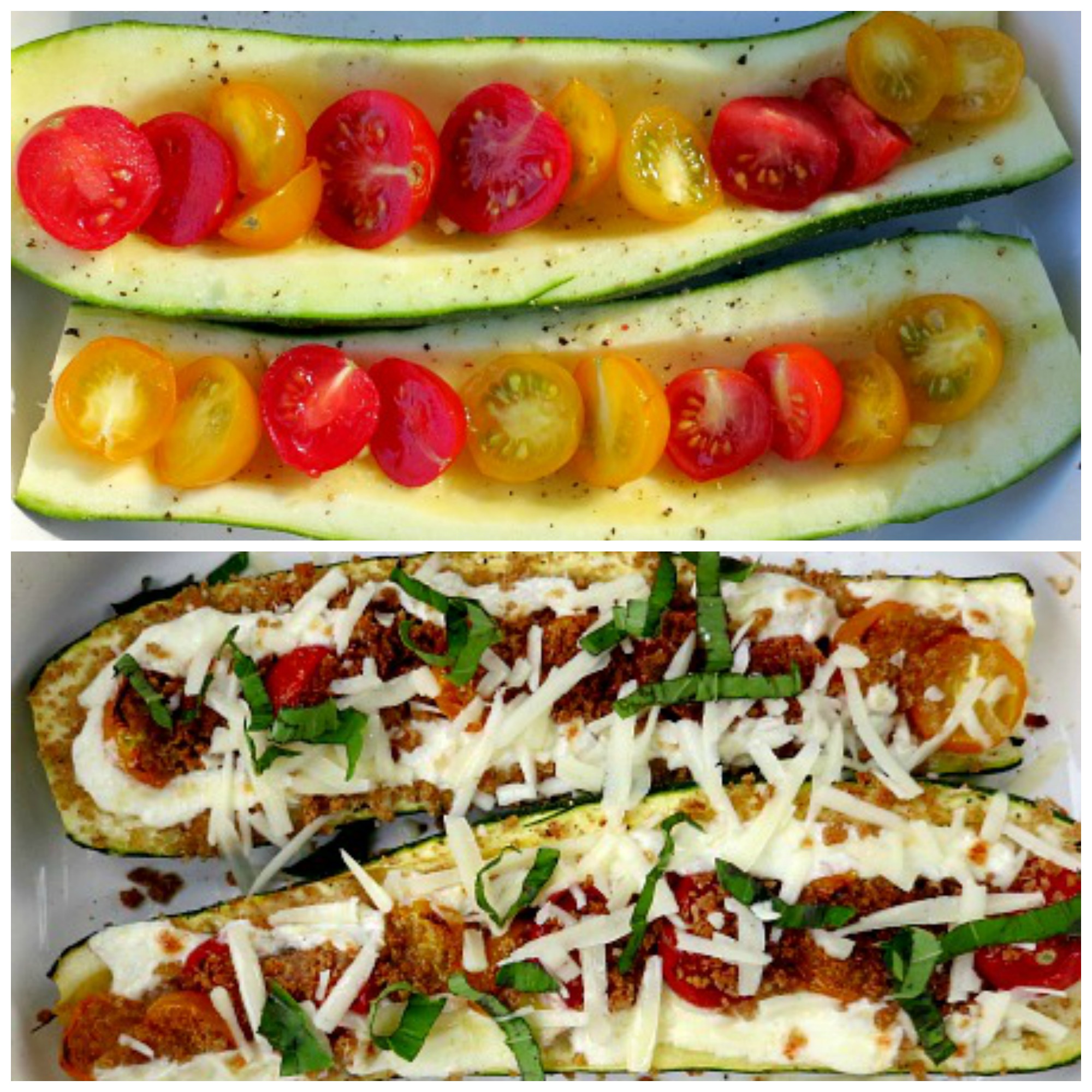 Some more of my petit tomatoes, along with the Big Hoss got used in this Heirloom Tomato Salad. Nothing says summer quite like a refreshing and taste bud tantalizing tomato salad, well except maybe a dripping wet peach, eaten over the sink or a crisp and sweet ear of corn, bitten right off the cob….I digress; this salad was summer on a plate or really a serving tray if you want to get all technical about it. Party pooper. 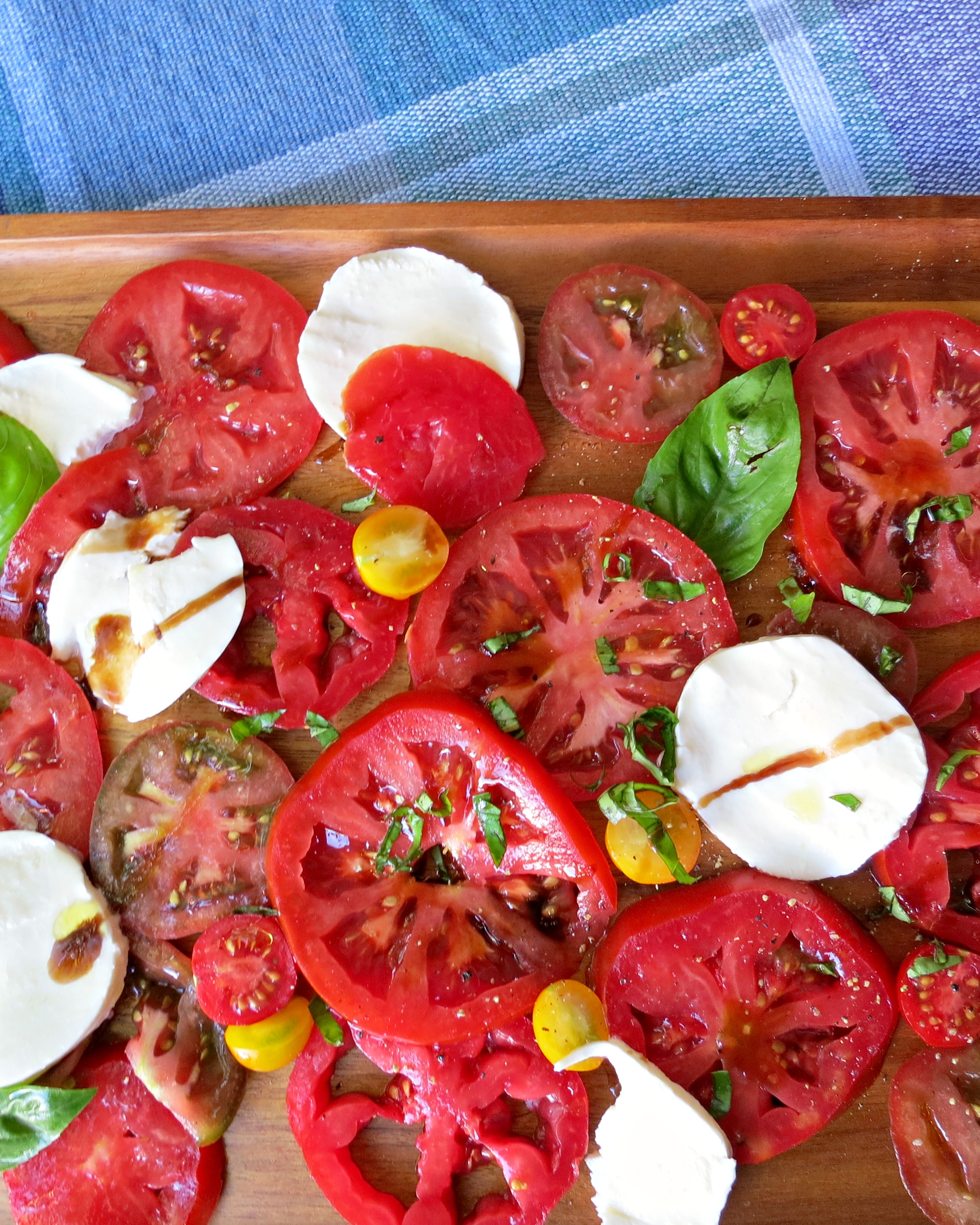 As part of that same meal, I went ahead and made Jenn’s Sweet Potato Chickpea Burgers because well, they’re awesome. Seriously, I’ve made these particular gems three times now, and I don’t see myself stopping anytime soon. I have at least a dozen in my freezer, and I’m worried they won’t make it more than a couple of weeks. They’re that good. Do yourself a favor and make them. 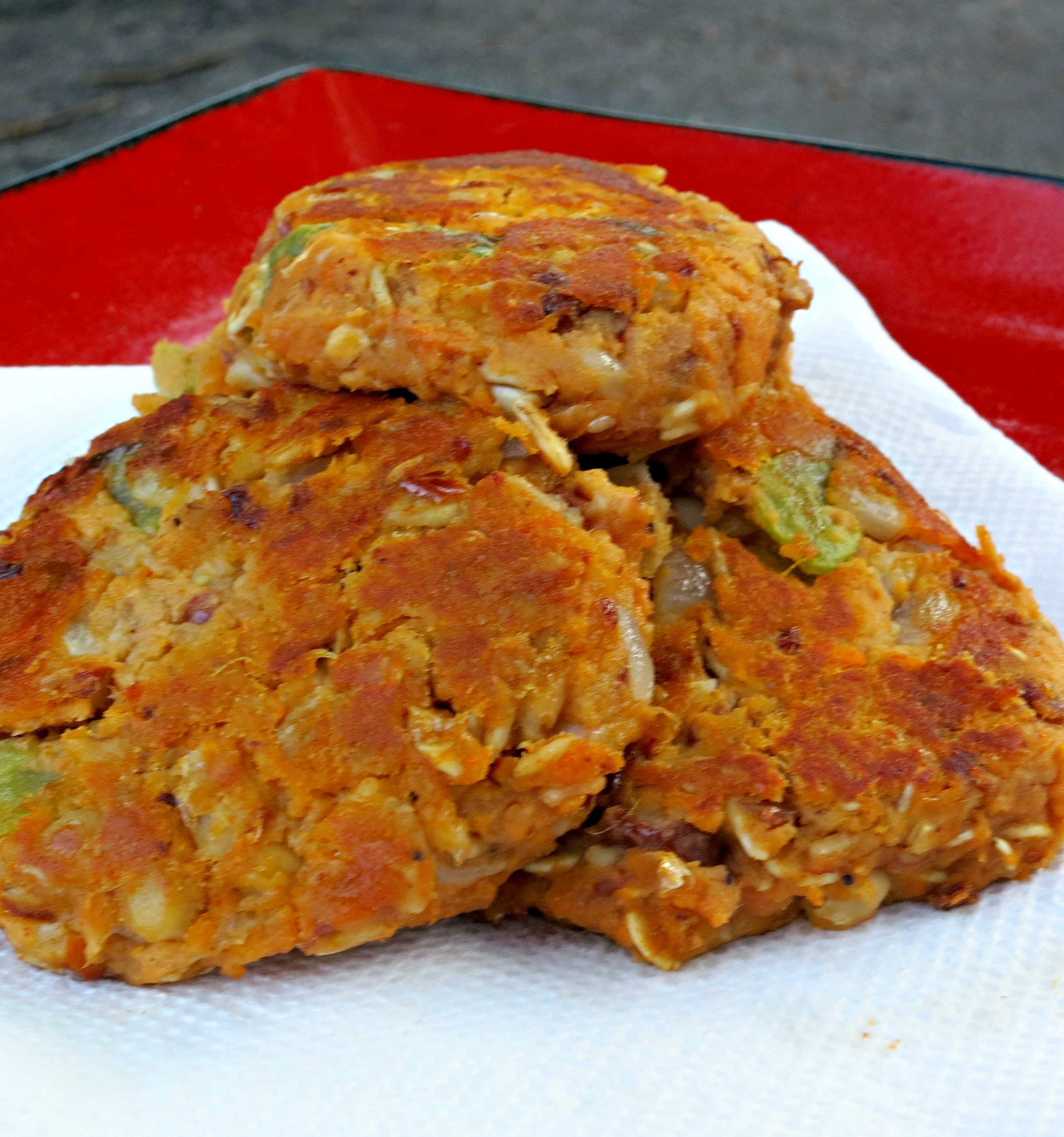 Just in case you aren’t totally convinced, although you obviously should be since I told you about them, here’s some more photographic evidence of their complete and utter amazingness. 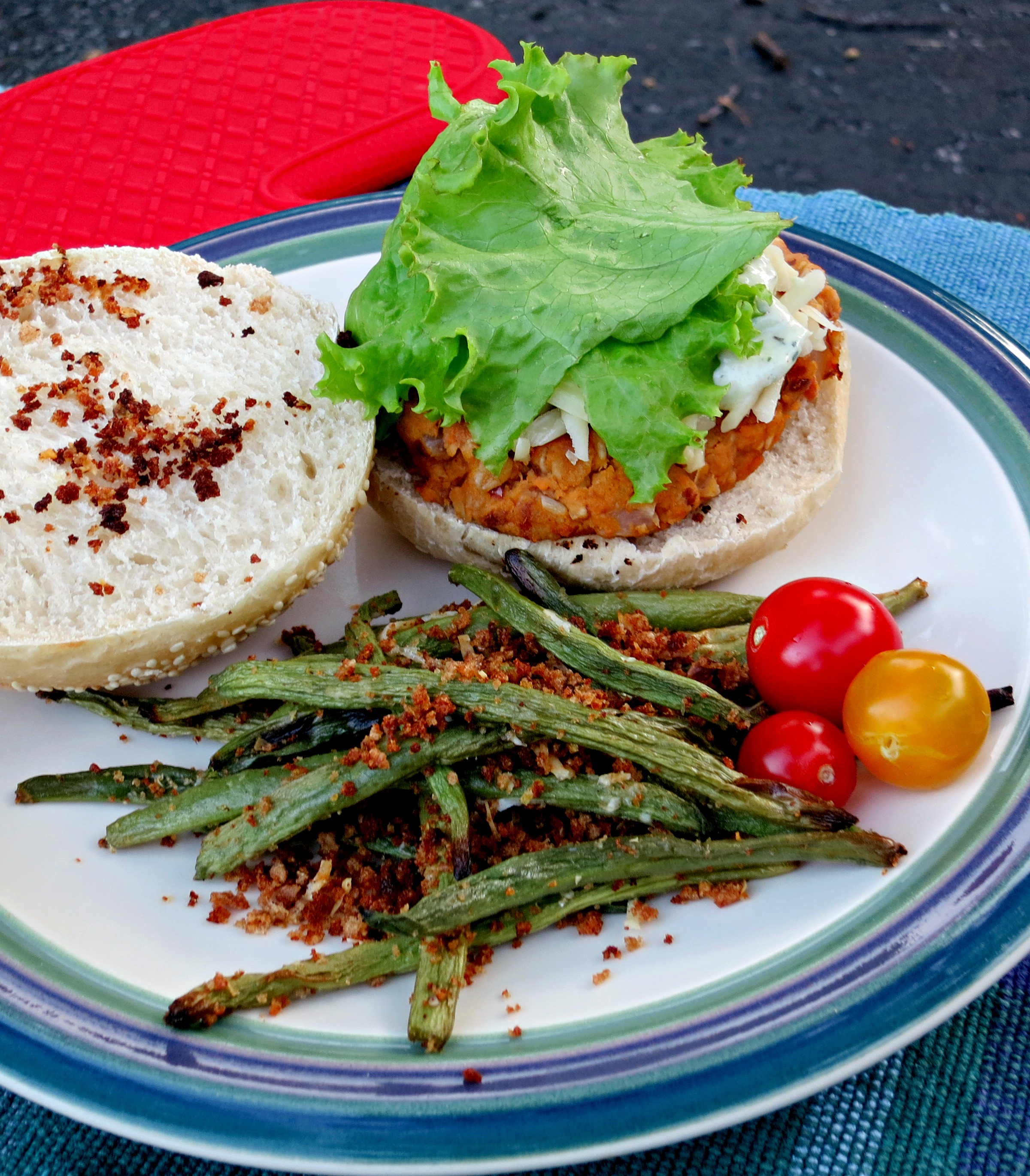 “Why yes, those are my CSA green beans in the foreground as well. How very astute of you to notice.” Back to the burger….

I’d love to end today on a sweet note, with a stellar dessert to be exact, but I don’t have one. Not this week anyway, but there is one coming up and it involves blueberries. Stay tuned.

This post is also linked up with Heather at In Her Chucks and Kristy at Gastronomical Sovereignty because they are all about my pickles…er, I mean my CSA veggies, which to be fair does include pickles this week.

Have you ever made pickles? If you did, did you eat them? What vegetable scares you? C’mon, I know you have one. You can confess here; this is a safe zone.

« Week In Review: The Back To Reality Edition
Five Confessions »