You are here: Home / Bottoms Up / My Day with the Ginn Academy Cooking Club and HealthCorps

I need to step on my soap box today.

Bear with me while I get this thing situated; it’s a big box. I know I’ve been working out and all, but it’s still pretty heavy, plus a tall order to boot.

Obesity is a big problem in the United States, no pun intended. Child obesity even more so.

Some days those numbers make we want to scream and shout. What kind of country are we building when our children’s mortality rate is lower than our own? How is that setting them up for the future?

Some days those numbers make me want rant and rave. What message are we sending our kids? What sustainable habits are we teaching them?

Some days those numbers make me want to throw in the towel because they’re just so damn disheartening, especially when you consider that obesity, for the majority of them, is a learned trait.

There’s a reason I signed up to be a Healthy Living Blogger though, and it has nothing to do with protein powder, egg whites, or two-a-days.

For me, being a Healthy Living Blogger is about promoting health and wellness, through whole foods, in a sustainable and responsible fashion. I am not a nutritionist, a fitness expert nor a registered dietician. I’m just a girl who loves her veggies as much, if not more so, than her cake, and I want to show people how those same veggies can be sinfully delicious, minus the sin part because I’m on my best behavior today.

I want to make a difference in people’s health, and I support anyone whose vision is in line with my own. HealthCorps is one company I can get behind, in front of, or whichever way they’ll take me.

HealthCorps “vision is to lead a nationwide movement toward a new generation of healthy young people.” With the addition of an on-site Health Coordinator in schools, they are creating “an  innovative in-school model that inspires teens to make healthier choices for themselves and their families.”

I was fortunate enough to be a part of what HealthCorps is trying to accomplish here at Ginn Academy, an all boys high school in Cleveland, Ohio. I joined Jasmyne Jackson, their on-site Health Coordinator, and her students for a day with the Cooking Club. 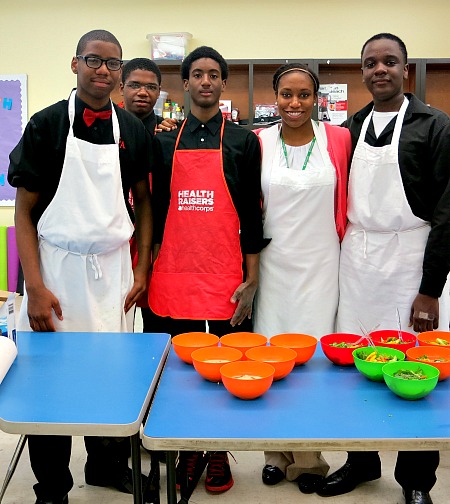 The Cooking Club is an after school program, that meets weekly and teaches the students how to make healthier choices, and also how to implement them, by literally getting down and dirty in the kitchen, or really the classroom turned kitchen. Details, details. These guys have a Vitamix, which makes it a step above my kitchen, although they are lacking an oven, so I guess we’re even. 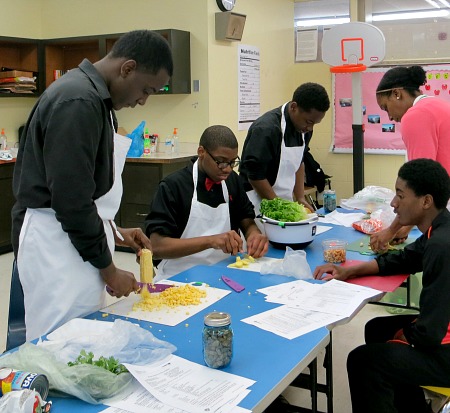 Even without an oven, they managed to put together a pretty spectacular spread. Thai food was all the rage when I was there. We got to learn a bit about the culture and the benefits of a Thai diet, and I got to try a freshly made green salad topped with sliced mango and shaved ginger. The dressing was the star of the show though. It was a perfect balance of sweet and salty, which not only impressed the kids, but got them to see a far healthier and equally delicious alternative to their once beloved ranch dressing. Accompanying the salad was a satisfying and savory bowl of Thai Style Fish Chowder, which included garlic, jalapeno, potatoes, corn, lima beans, ginger, cod, coconut milk, fresh cilantro, basil and mint. It was a flavor explosion, and these kids made it all by themselves, from start to finish.

In previous cooking club sessions, they’ve created a whole host of dishes, including but not limited to granola (my specialty), linguine with mussels, and green smoothies, the surprising, yet overwhelming fan favorite. Obviously, these guys have great taste.

Between the Cooking Club and the annual Health Fair, there is a dedicated group of people at Ginn Academy working to broaden the horizons of these kids by exposing them to new food choices and lifestyle practices, such as yoga. The school is also working on plans for their own community garden, and next week they are celebrating National Salad Day, a topic I can totally dig. Maybe they’ll let me bring some salad toppings; I’ve got a few in mind. They are sharing and teaching skills which will benefit these students for the rest of their lives; or at least so long as they need food for survival, which I’m pretty sure is going to be a while. 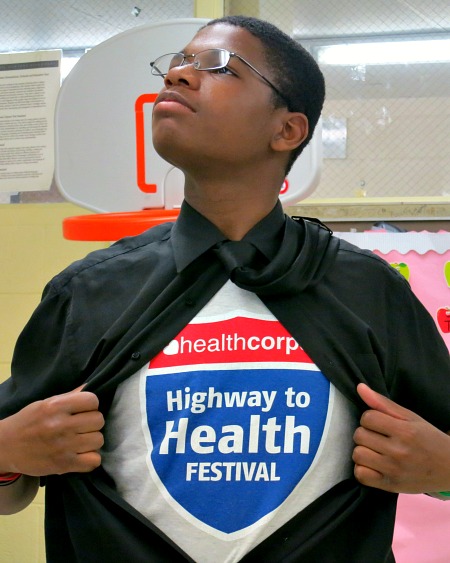 Being a part of their Cooking Club, even for one session, was something I’ll never forget. When it was all said and done that day, we got to kick back and enjoy the fruits of our labor. We even put on some tunes, while we happily slurped up our soup and dug into our salads. Too bad it wasn’t Outcast. ♫ “I’m sorry Ms. Jackson (oh). I am for real.” ♫

Have you ever got to be a part of something like this? Would you want to? If you are an HLB, why did you join the community?