You are here: Home / Reflections / WIAW: The Hubby’s Edition

Have I told you about the Hubby?

“While his ninja skills are no match for my own,” she says as she cracks knuckles, “he’s a veritable wordsmith capable of crafting sentences more superfluous and silky smooth than me.” Tis true. The man has a way with words, among other things, some of which cause me to cast a subtle and slightly devious smile, when I reminisce about them. Living apart from your spouse all week is its own sort of foreplay, no?

In any event, last night as I was driving home after yet another late night at the office, I was talking to the Hubby and bemoaning my What I Ate Wednesday post for today. While I love the concept, my participation has been an ongoing thing for two years now, and truth be told, I’m running out of different ways to describe my daily eats. You see for me, it’s just as much about the words, as it is the food. 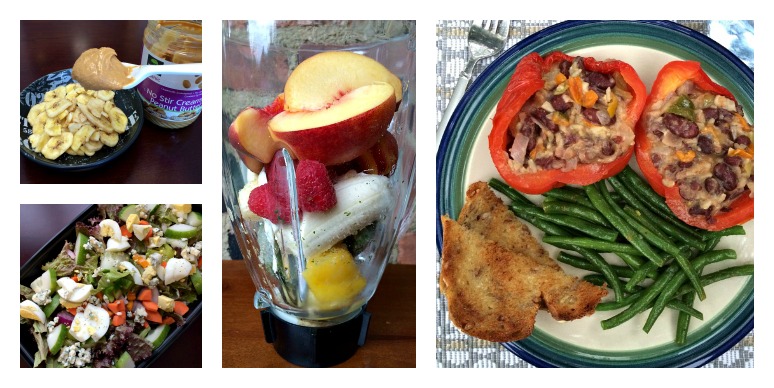 At the Hubby’s gentle suggestion, I  opted to take the night off, not realizing he had an ulterior motive. You see, waiting in my mailbox this morning (Move over Tom Hanks and Meg Ryan, “I’ve Got Mail”) was an email from the Hubby, with a subject line which read “Reader Submission For Your Blog.” I’ve decided to share it with you; it’s the least I can do after the great Sweet Potato debacle. His post has nothing to do with food or fitness, although he was mowing the lawn at his home away from home, so I guess we could say he was exercising. Yes, that’ll work.

I give you The Hubby’s Tale, not to be confused with The Knight’s Tale, even though it captures an epic battle between a Man and a Stray Pennsylvania Cat.

It’s a beautiful warm day; the sun is shining, the birds are singing, and I am thoroughly enjoining the outdoors as I mow the lawn without a care in the world.  I finish my current lap and rotate the mower to start the next stretch when suddenly all sweet melodious noises stop.  Staring at me, maybe five meters away, right in my path, is a tubby feline with a fat face and a death wish.  I am absolutely frozen as this wannabe jaguar is holding my gaze, either too dumb to fear my mulching mower or, as I’m about to discover, a shameless schizophrenic s.o.b. who traded his Lithium for a pinch of nip and a bottle of Jack.

With a one-eyed wink, he drops his drawers and all modesty, while impressively maintaining eye contact.  I sarcastically extend my verbal gratitude as he buries his business in the long, healthy grass that I will momentarily be cutting.  I react with the only rational action I can think of, that is pull out my iPhone and snap a picture.

As he is finishing up, I’m having an internal debate on the merits of using the bag at the back of the mower to collect the clumped grass and moving forward… other clumpage.  Satisfied with satiating the Earth, my  ebony adversary, with whiskers held high, saunters towards my leg.  In my soul, I know he is victorious and wants to be rewarded with a scratch on his ugly malicious head.  Instead I let loose a primordial scream for him to move his nasty ass out of my way.  Mercifully, he acquiesces with a salty snicker and snaps me in the calf with his tail.  I know what I must do, but I don’t like it.

I push the mower forward, one step at a time, but find myself unconsciously slowing and staring as I approach the freshly fertilized flat.  Ironically, with the courage of a lion, I accept my fate and mow over the percolated poop.  Like when you use the hose to vacuum up a huge bug in your basement, I can feel the nuggets spinning in the cyclone of the blades, mixing with understandably unhappy clippings, then splattering into the back of the collecting bag inches from my knees. I am moderately successful in keeping the vomit down.  That is, until I notice a formerly welcoming next door neighbor, who witnessed my entire “Nightmare on Wood Street” from her beautiful blue convertible with no windows to hide her disgust. 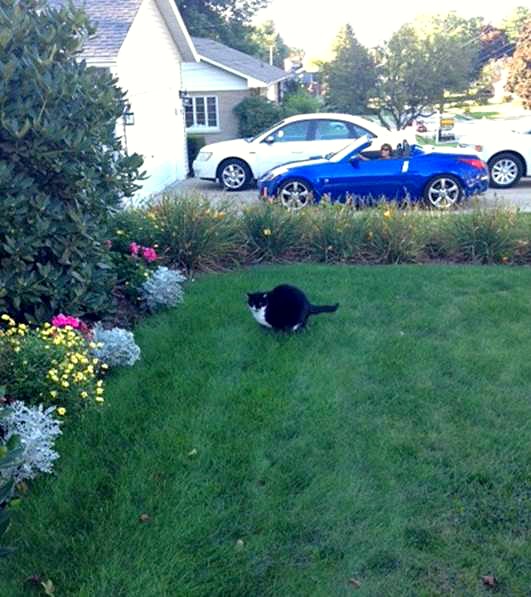 Tell me about your partner of your choice. I want to hear only good things. Go.