You are here: Home / Good Eats / An Apple A Day

My winter CSA ended the week before Christmas.

I know it’s heart breaking. I haven’t mentioned it sooner because honestly I’m not ready to talk about it, much less deal with it. I prefer to take the ostrich route and bury my head in the sand, which is a very effective coping mechanism recommended by no medical professional anywhere.

In any event, I got a pretty decent sized bag of apples that last week. If I had thought about it and realized I’d be doing a post about them… if I hadn’t caught the plague… if decent lighting actually coincided with the hours I’m home and if they hadn’t been received during the holiday madness, I might have taken a picture of my pretty little apples. Then again, I might not have.

Either way, you’re getting a stock photo from the internet. Ooh look how shiny. 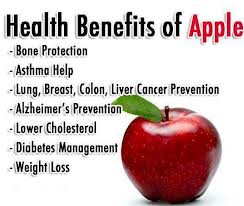 Gone are the days of just biting into an apple and chomping away. In October, sure I’d gnaw away, braces and all, but not in January. It’s too late in the season and frankly I’m bored with downing apples straight up. I did that for months, and I’m ready to move on.

My recently departed CSA had other ideas though.

So I went on an apple hunt. I scoured the internet, Pinterest, my favorite food bloggers…you know all my usual haunts in search of some good old-fashioned apple recipes, and let me tell you, you guys did not disappoint.

First, I made some Chewy Apple Oatmeal Cookies, mostly because I promised my father-in-law cookies way back in November, so it was high time I actually delivered. Sometimes I think the beater is the best part, although these cookies are hard to deny, provided you’re into oatmeal cookies sans chocolate. I know we’re a rare breed; I say embrace it. These cookies are chewy on the inside, yet crispy on the outside. Cookie perfection. 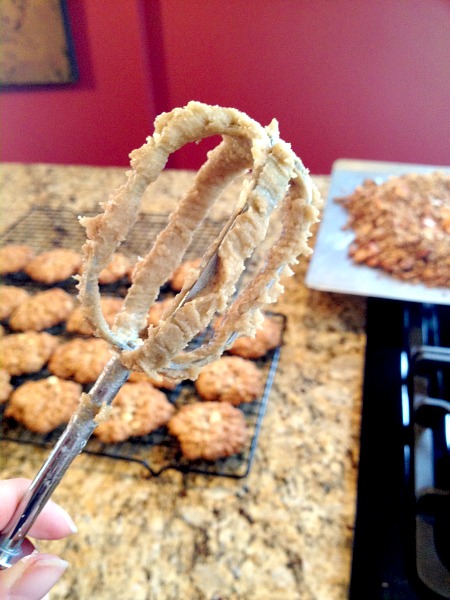 Moving on, I dipped my toe or really dove head first into less healthy waters. Yes, I’m qualifying the cookies above as healthy, and while it’s a stretch, they are better than donuts, which is where I went next.

I made these mini Apple Fritter balls. 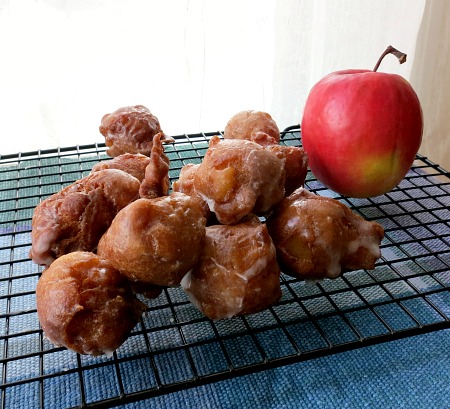 Balls aside, which I’m sure can’t be good since it’s not their natural state, these mini fritters were magically delicious. They were also fried and then dipped in icing, which is a recipe for success, although not one I’d eat every weekend. In fact, before I popped these, which is akin to ♫ popping tags ♫ but better, I can’t even remember the last time I enjoyed a donut. They made my black little heart skip a beat with delight. That might have been the fat and sugar, but whatever. I like indulging from time to time, especially when it’s covered in icing.

Back into calmer waters, I also made a great big batch of Ms. Amanda’s Chunky Homemade Applesauce. While I didn’t dip each apple slice in lemon water because I was short on time, I did squeeze lemon juice over them, while simultaneously dousing them in cinnamon, and the end result was sweet bliss, made only sweeter when eaten from a heart-shaped bowl. In the words of Amanda, Awwwr.

Next up was Jenn’s Creamy Potato Apple Brie Soup, which involved some of my favorite things. Spuds: check (also from my CSA). Fruit: check. Cheese: check. With ingredients like this, it’s impossible to go wrong. Throw in a Crock Pot, and it couldn’t be easier. The Hubby declared this soup “fantastic; an absolute keeper.” Even though I don’t always agree with my man, this time he was right. “Yes, yes, honey I’ll put it on the calendar. I’ll also see you tonight,” she says with raised eyebrows and a flirtatious glance. I haven’t seen my man in days, so please forgive my modest internet teasing.

Last but most certainly not least, is Kirsten’s Finnish Oven Pancake. When I saw this recipe, I automatically knew I’d be making this one day since they reminded me of a dish I used to get at a pancake house in Buffalo: the Dutch Boy. Dun, dun, dun. If you’re picturing a cute little blond-haired, blue-eyed Dutch boy skipping down the cobblestone street in wooden clogs, stop right now.

Instead you should envision a world where your pancake is actually your plate. Um hello, it doesn’t get much better than this, well unless you decide to add butter. Obviously. 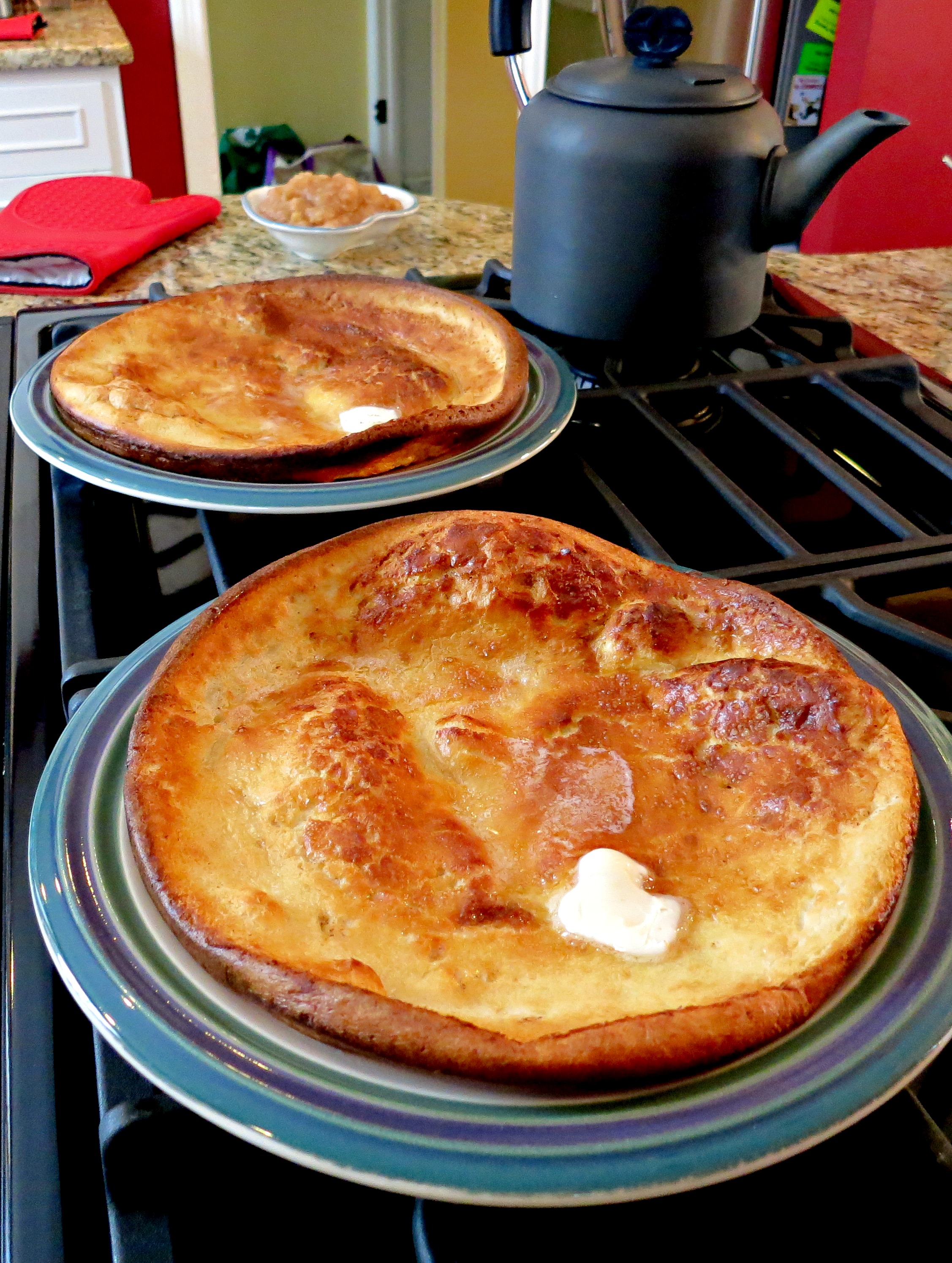 These pancakes are thicker than usual, although they are light and super airy, with a texture more reminiscent of puff pastry than hotcakes. They are amazing, and I am head over heels in love. I actually used Buttermilk instead of the Eggnog the recipe called for because that’s what I had in my fridge, which I know Kirsten will understand. This recipe only requires a smidgeon of sugar and a dash of butter, so you can bet this will become a regular in my weekend rotation.

I topped my Dutch Boy, which sounds highly inappropriate and also explains why Kirsten calls them Finnish Oven Pancakes, with a pat of butter, the juice from half a lemon, Amanda’s Chucky Applesauce, more cinnamon and a puff of powdered sugar. 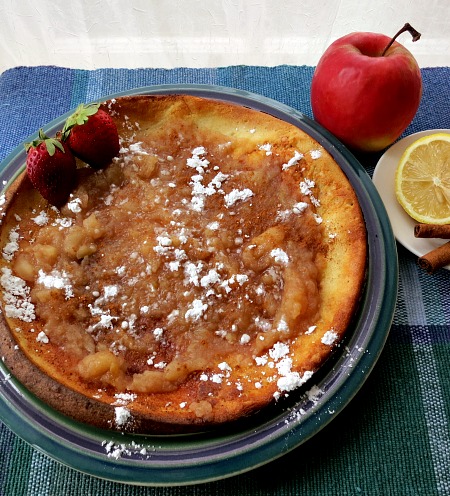 I am already plotting how to top my next one. Perhaps I will dip into my stockpile of frozen fruit. Strawberries are sounding particularly appealing.

Now in no way related to apples, I thought I’d share how my frisky felines feel about my food photography station. That’s Max, my geriatric cat on the left and Oscar, the young whippersnapper, on the right. Samantha couldn’t be bothered with food. 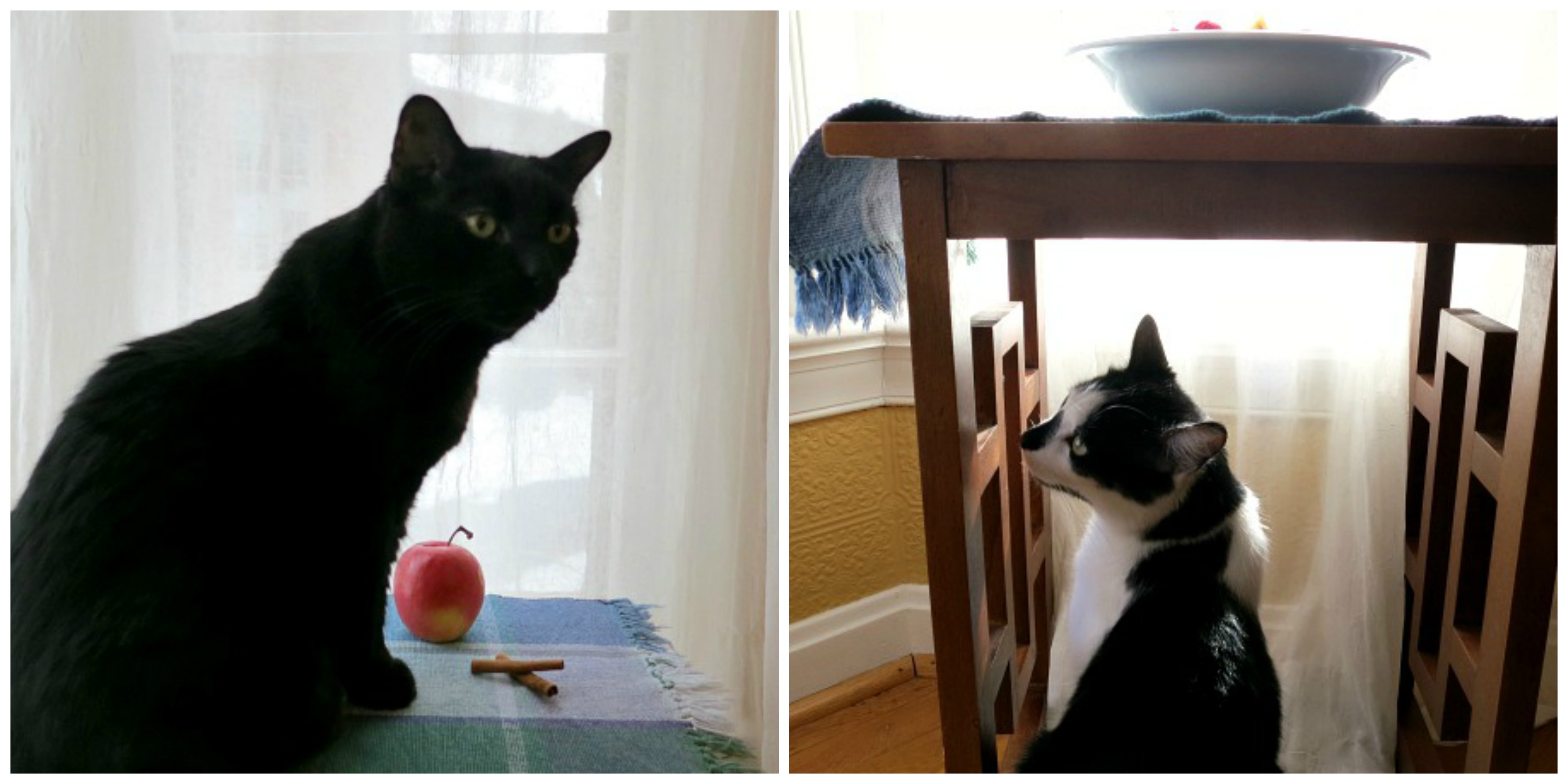 This post is linked to Laura’s Strange But Good because hello, pancake plates. It’s also linked to She Eats’ Fresh Food because it doesn’t get much fresher than this. Plus, I’m also officially ‘fresh’ out of apples. Oh brother.

Are you still eating apples? What’s your favorite apple recipe?  Feel free to include a link in the comments section.