You are here: Home / I Work Out / Vanilla Gorilla

If you follow me on Instagram, you know based on the title of today’s post, I’m finally going to talk about the Tough Mudder. If you don’t follow me yet, you really should. For real; you’re missing out. Don’t say you haven’t been warned.

My baby brother leading the charge. This whole thing was his idea, which means I blame him for everything.

When I first set out to do the Tough Mudder, I had two goals:

Perfectly reasonable goals if you ask me, especially when you factor in the simple fact I’m not a runner and my crappy knees will never allow me to be one. 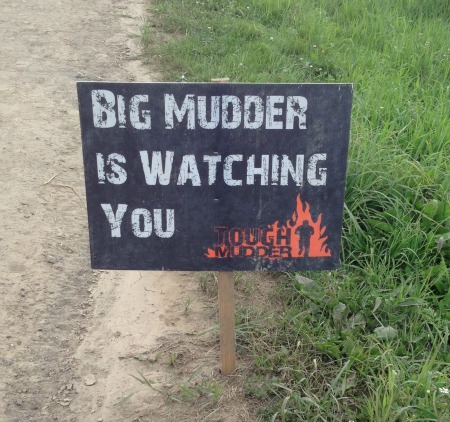 Physical logistics aside, I committed to this race months ago, and I have been training ever since. My training consisted of lots of slow and steady runs with the assistance of knee bands, which eventually allowed me to run pain-free for about four miles. 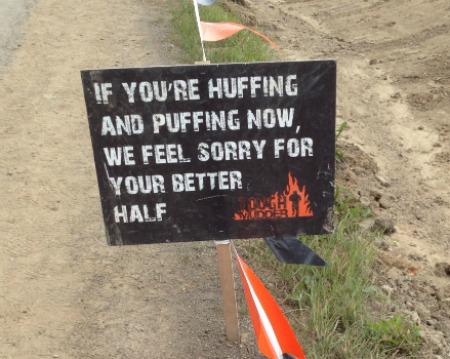 Also one gloriously hot and humid day, the Hubby and I ran for two and half hours through the Cleveland Metroparks. We went up a shitton of hills, down what seemed like significantly less hills, and we stopped every mile or so to do push ups, dips, and core work. We managed to cover almost nine and half miles in 150 minutes, and I ran just over six of those. I thought I was going to die.

It was my biggest running triumph to date, and I could barely walk the next day. Me and my knees; we’re simply not friends, or at least not when I put them through strenuous physical activity. They almost always get the last word, especially the right one. He’s a vocal son of a bitch.

In addition to running, I started doing a ton of upper body exercises, which is one of my weaker areas, second only to my knees. This consisted of many, many “almost” chin-ups, and by almost, I mean I can lift myself to the point where my eyes are in line with the chin-up bar, although my chin hasn’t actually crossed over yet. Stupid technicality. 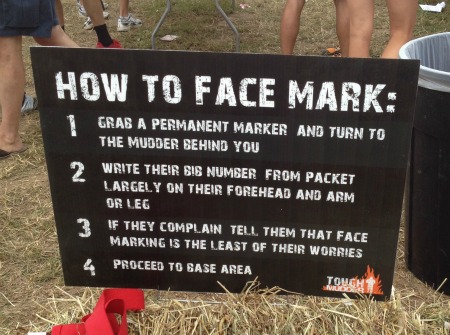 In my defense (you knew I’d have one), I went from dangling like a fish mere months ago to being able to pull myself up to almost there and even lower myself back down. Do not dismiss the lower back down portion either; that shit is hard. 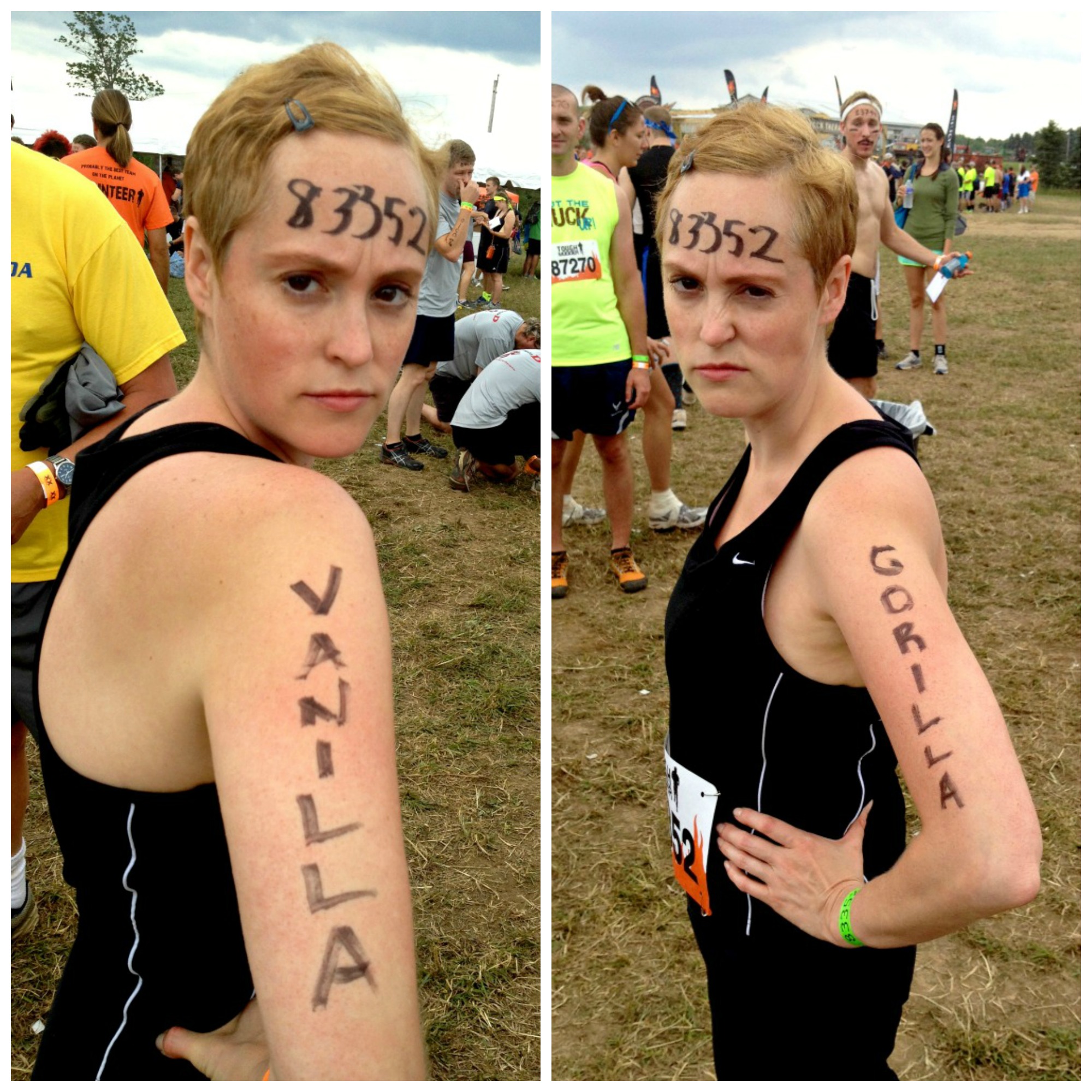 I also did countless boy push-ups over the past few months, and I kept up with Mixed Martial Arts and Boot Camp classes because they throw a lot of random shit at you in those sessions, which is perfect Mudder training and completely apt for our course, since they actually threw tennis balls at us in one obstacle. Yes, I had balls flying at me, at the rate of sixty to seventy miles an hour. Guess what? I dodged ’em all because I am sneaky like a ninja.

A week or so before the big event, we got our course map. 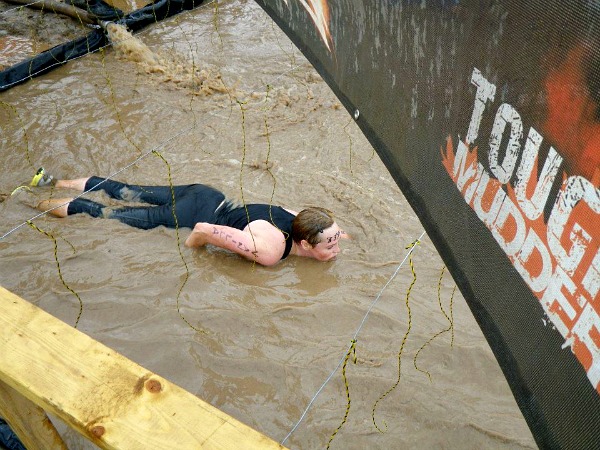 That’s me; face down in a pool of muddy water with live electrical wires overhead. Just a typical Saturday afternoon.

I was hoping for a shorter distance with a lot of obstacles to break up those miles. My ideal course would have been ten miles, on perfectly flat and level ground, with twenty-four obstacles along the way. I didn’t get that. In fact, I got the opposite; an eleven and a half mile course with sixteen obstacles, a handful of burn zones and “hazardous” terrain; their words, not mine. If hazardous includes running and sometimes sliding down the side of a mountain, then I would agree with them. 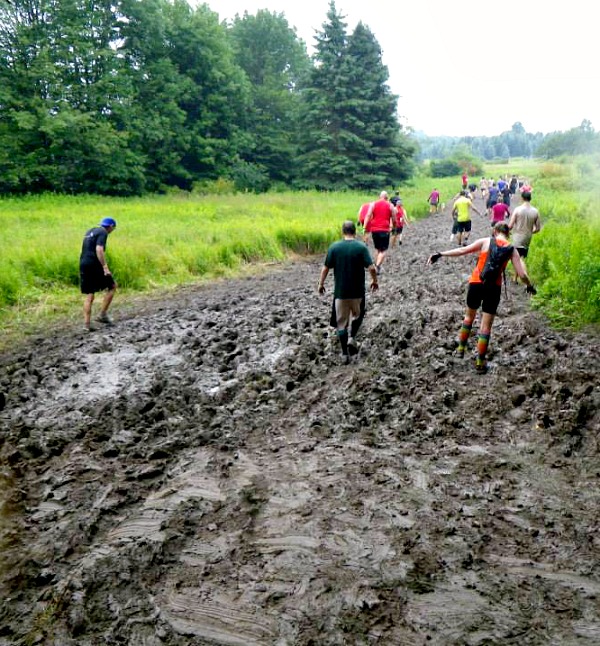 This is just part of the course; the part where you had to fight not to have your shoes suctioned off in the mud.

The Tough Mudder is specifically designed to break you; both physically and mentally. 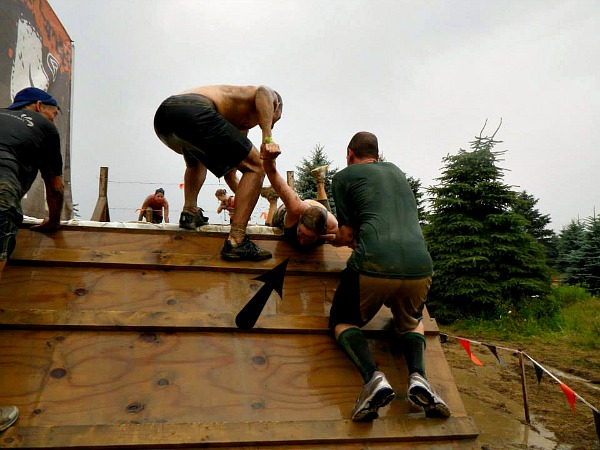 The Arctic Enema (i.e. an ice bath). When they pulled me out, they also pulled my pants halfway down, so I mooned the crowd. I’ll be honest; I didn’t care. Next time, I’ll be sure to get paid.

If this was only a battle of mental wits, there’d be no contest. In my mind, I can do pretty much anything, including those silly chin-ups. It’s usually my body which struggles to keep up, and I blame the fourteen years of gymnastics, back in the days of my youth. 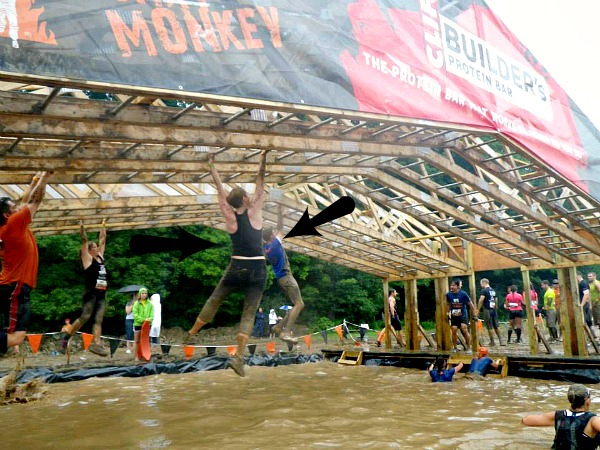 My goal was to make it two rungs on the monkey bars before dropping into the murky and muddy waters. I surprised myself and made it almost half way there. Turns out, my almost chin-up training worked. 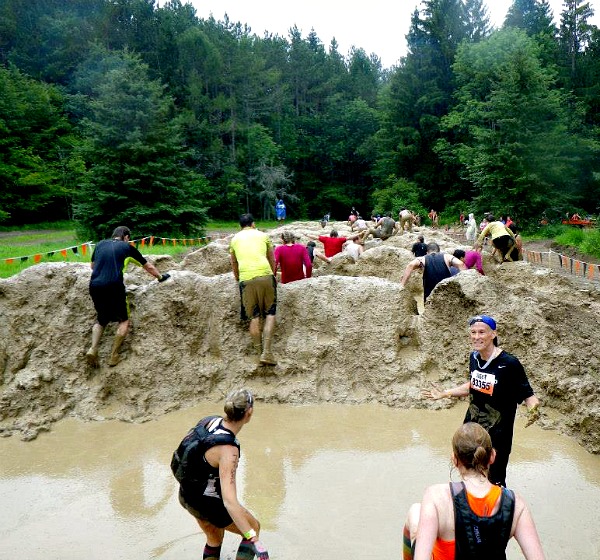 The Mud Mile. This mud was different from all the rest; it was thick, goopy and gritty. Yes, gritty and I vividly remember mud being in places no mud has gone before.

This course pushed me to my physical limits and beyond. Like clockwork, my right knee started bitching four miles in. I went down, hard, in slippery mud patches more times than I can count, and I took a backwards header on the very first obstacle. Thankfully, my teammates caught me (“Hey y’all: I really appreciate that”).

Walk The Plank; can you say Geronimo? Heights don’t scare me.

The truth is my body post-Mudder is a bit of a hot mess. My legs look like someone went to town on them with baseball bat, and the heels of my feet are covered in open wounds and blisters. When I finally wrenched my shoes off Saturday night, there was mud, rocks, twigs, and god knows what else in there; the same went for my bra. 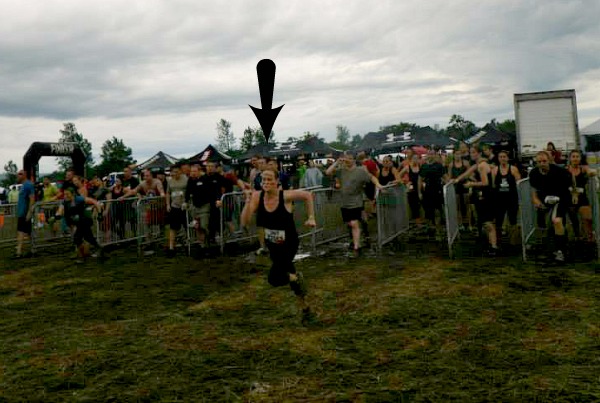 Everest; I am running as fast as my little legs will carry me after punishing them for 11 miles. By the way, if it looks overcast, it’s because it was. It rained on us almost the entire time.

Sunday night, I could barely move, much less put myself to bed. Come Monday morning, walking was slow and arduous at best and driving was completely out since my knee was about as broken, as broken can be. The Hubby actually had to take me to work and pick me up.

I am almost there. Sadly, this is my one disappointment. Despite three attempts, I never made it to the top of Everest.

Of course, I went to the office on Monday. I had some bragging to do. 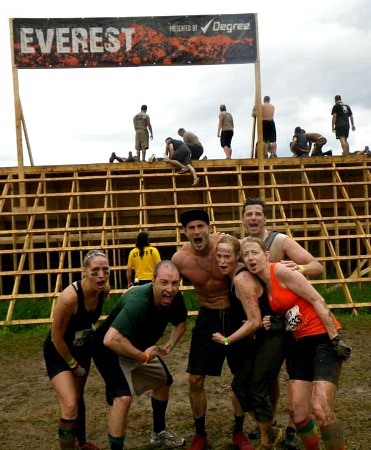 Eleven and half miles done and only one obstacle to go. It’s safe to say, we’re excited.

I brought in my orange head band, the one given only to those who finished the race, and casually displayed it on my desk. I also wore a skirt so I could show off my war wounds with pride, even to those who didn’t want to see them. I’m sure HR is going to be calling. 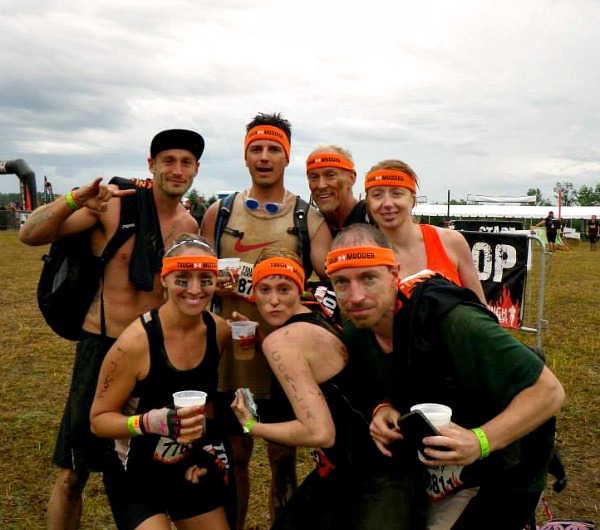 Despite my broken body, I, along with the rest of my team, completed the Buffalo Tough Mudder of 2013. I ran more than my little legs could carry me. I navigated the treacherous terrain, attempted every single obstacle and completed all but two of them. I participated in every burn zone, which involved push-ups, burpees, bear crawls, hay bales, and squats galore. 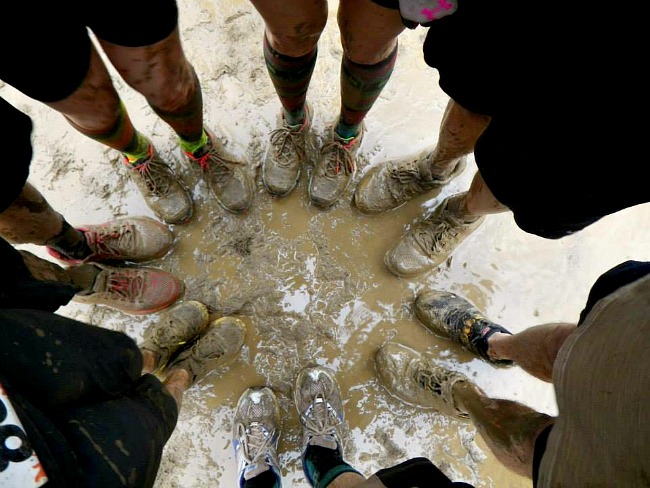 I may have been physically broken, but mentally, this challenge ain’t got nothing on me. I am all heart, with a side of stubborn. I’m badass, and my team is a bunch of tough mudder fuckers.

If you were to ask me, would I do it again, I’d say, “Hell yes,” because at the end of the day, there is nothing quite like it. The camaraderie, the teamwork, and the adrenaline rush cannot be beat. I couldn’t be more proud of all of us, especially my Da (deliberately misspelled; he is too cool for the last d), who not only completed the course, but led the charge the entire eleven and a half miles.

It seems only right to end this post with our team chant, which was ultimately picked up by all of those participating with us that day.

With every uneven step, through the rolling hills, into the misty mountains, and over the corn fields, you could hear my little brother’s voice call out, “Do we like it?”

To which everybody responded en masse, “WE LOVE IT!”

Have you ever done a Tough Mudder? Would you? You could be on our team next year. Think about it.

« WIAW: The Vacation Edition
Week In Review: The Back To Reality Edition »